Has anyone ever hit his own mother

A papablog by Nils Pickert * 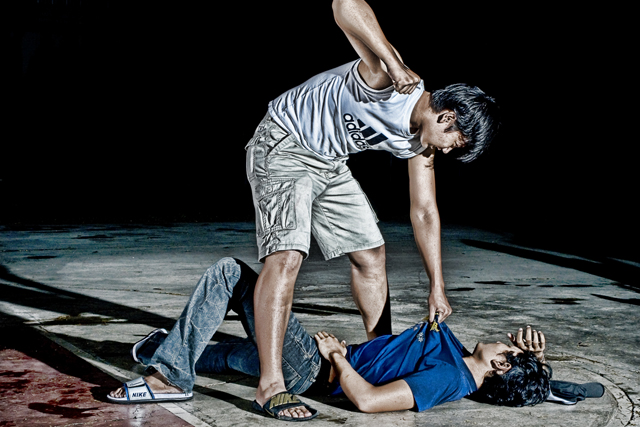 Can my child defend themselves if they are attacked? Photo: Akarkayu, Flickr.com

There are not many ways in which I differ from the mother of my children and the wife of my life when it comes to upbringing. We have known each other for two decades now and have had offspring for a decade. So there is enough time to come to an understanding and, if necessary, come to an agreement on pretty much any controversial topic. But on this one thing we just will not and will not agree: Are children allowed to strike back, and if so, from when? My wife believes violence shouldn't be an option. No way. She firmly believes that every conflict can be resolved differently and that violence only escalates it further.

On the other hand, I am of the opinion that the onset of physical violence already represents a stage of escalation in which in some cases it should not only be possible, but it is appropriate to fight back. When children just don't stop their abusive behavior. When all the talking, clarifying and exhorting do not help and the beaten child is not offered a single opportunity to free himself from the role of the victim.

We probably see it differently because we grew up differently. My wife has never been embarrassed to even think about having to defend herself physically. A childhood and youth in a peace-loving family with high ideals and the will to realize them. She is deeply repugnant of violence.

A few times I was confronted with situations in which I saw no other option but to beat myself out of them. When you just didn't stop looking for fights with me again and again. When there was no other escape route than the one through the person who grinned and blocked the exit and intended to rob me and beat me. I am never satisfied when I use force. But more than once I was glad that I didn't shrink from it. What remains are questions and doubts.

What do you oppose to an unconditional will to use force? For my wife the answer is clear: the absolute will to nonviolence. It's a lot more difficult for me. Because although I am convinced of my position that sometimes you have to fight back, I am struggling to find a coherent concept. Once you have opened this Pandora's box, you are responsible for all the consequences and must have an answer to all of your questions:

I am nowhere near able to give an exhaustive answer to these questions. Instead, I find myself doing evasive strategies: depending on, we'll see, let's see, it might not even get that far. The whole thing is pretty uncomfortable for me. I find it even more uncomfortable, however, that my children deny themselves violence as a last resort in certain situations. For me, the absolute will to nonviolence is in most cases a noble goal that I would like to emulate in principle.

In some, however, it is the compulsory obligation to make an unconditional victim. In these cases, the commitment to renounce violence is tantamount to an invitation to more violence. "You can keep hitting me, I won't defend myself anyway." That is exactly what I want to spare my children. I don't have the answers to the detailed questions. I just want you to think carefully about the use of force, because it would have to endure the echo.

But it is probably not that simple.

* Nils Pickert lives with his family in southern Germany. He has a monthly column on Standard.at in which he deals with the male side of female emancipation.