Why do Mexicans ignore us Americans

Companies in Mexico ignore corona requirements - even under US pressure

There are shaky amateur videos with the cell phone, the sound is low or hissing - filmed hastily so that the security service does not discover them. It shows groups of workers demonstrating from the manufacturing industry in northern Mexico. They throw their smocks at the feet of the overseers or plead in front of factory gates that they either have to continue working with health risks or lose their jobs.

At Hyundai, Roger's, Carso, Safran, Hisense and Ontex in Tijuana, there have been protests in recent days, according to journalist Alfredo Alvarez. According to Luis Hernández, chairman of the Federation of Manufacturing and Export Industries in Baja California (Index), 60 percent of the 1200 suppliers are currently closed. There were conflicts in around 20 companies, "mainly from employees who see the pandemic as an opportunity for paid vacation" - at least that was his view of things in an interview with DW. 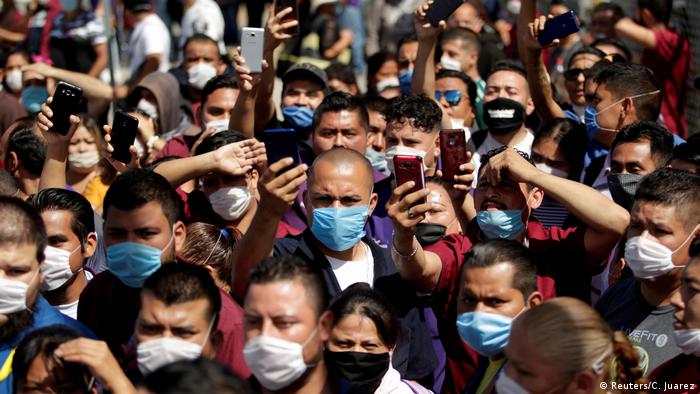 Actually, only systemically important companies are allowed to work in Mexico. But many of the maquilas that produce for the US market resisted the order and threatened the workers with dismissal if they did not appear, reports journalist Alvarez on his website. The consequences of this practice are fatal: 20 deaths from the coronavirus in maquilas have been publicized so far - 13 of them at the auto supplier Lear in Ciudad Juárez.

Lear's health service, which, according to research by the Los Angeles Times, was already aware of COVID-19 cases at the end of March, fed the sick with painkillers and sent them back to the assembly line. Obviously, things are so careless in many companies. In Tijuana, a spokesman for Surgical Specialties confirmed two coronavirus deaths in the medical supplies manufacturing plant on Wednesday. The factory is considered to be systemically relevant. Workers complain, however, that they have to work in full instead of the officially prescribed 50 percent. The business association Index recommended the installation of clinical thermometers on factory gates to its members - only one company has complied.

Millions of jobs at risk

But the pressure is not only coming from employers, but also from the US. The US ambassador to Mexico, Christopher Landau, tweeted that he would do everything in his power to maintain the supply chains. There is also a lot at stake for Mexico: seven million jobs and almost two thirds of exports.

Both free trade partners are currently defining what is essential in the pandemic differently. Mexico ranks among systemically important companies primarily food and health supplies. In the United States, it also includes the aviation and defense industries. And much lies in a gray area: while the lighting industry considers itself indispensable for safety reasons, the governor of Baja California had the maquila of the US company Copper Lightning closed. "If Mexico and the US do not agree, the supply chains will break. That is our main concern," said entrepreneur representative Hernández of DW.

The governor of Baja California, Jaime Bonilla, initially showed little indulgence for the industry. Again and again the politician belonging to the ruling Morena party had unreasonable maquilas locked - probably also because his hospitals are on the verge of collapse. "The companies want to continue to earn money, even if they sacrifice their workers in the process," he criticized in front of journalists. Baja California is the third most infected state in the country. 975 people tested positive, 133 died from the virus. In the past two days, however, Bonilla has suddenly been more conciliatory. "In the USA, the manufacturing companies are still open and operate subject to conditions, we are monitoring this closely."