What is a Science Olympiad

Recommendations for gender-equitable education at the Science Olympiad 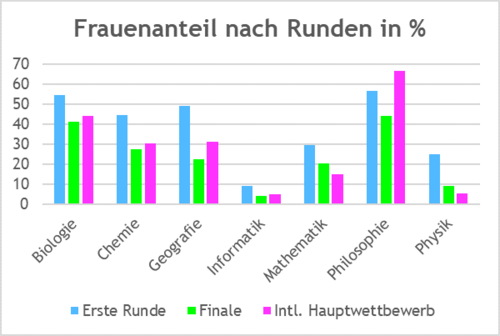 According to a survey (see below), around 75% of the participants from the MINT Olympiads (biology, chemistry, geography, computer science, physics and robotics) attend a corresponding high school specialization, such as physics and applied mathematics. It is worth taking a look at the grammar school classes and their gender distribution: 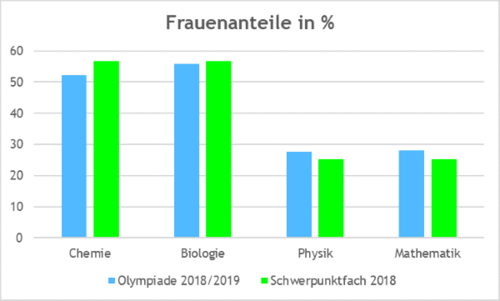 Source: Database of the Science Olympiad and the Federal Statistical Office

The proportion of women in the main subjects and our Olympics are very similar. This speaks in favor of the assumption that we can equally reach young women and men from the MINT subjects and motivate them to participate in the Science Olympiad. The gender distribution at national finals and international competitions shows, however, that we cannot rest on good proportions of women in the first round: the further the competition in the Olympics progresses, the fewer young women remain in the race (see first graphic).

What are we aiming for?

As part of the "Equal Opportunities Education" project, we have set ourselves the goal of minimizing the influence of personality traits on the chances of participation and success. All young people, regardless of gender, language, origin, etc. should have the chance to participate in the Science Olympiad and to be successful.

We have received financial support from the Swiss National Science Foundation for the purpose of promoting women. We collected empirical data in order to analyze our gender equality. We were able to assess the gender distribution thanks to the around 20,000 entries in our database. 291 former participants of the 2017/2018 Olympics have completed a survey we created and shared their experiences with us. In interviews with six young women from the Mathematics and Computer Science Olympiad, we also found out how they experienced their participation in exclusive women's offers.

What did our analysis show?

The majority of young people (96.9%) state in the survey that their gender does not play a role in the Science Olympiad. This can explain why 81.8% of the young people surveyed do not want any additional Olympic offers exclusively for their own gender. The interviewed women, on the other hand, do not want to miss the experience of the women's offers and appreciate the opportunity to exchange ideas with other participants and to find female role models. Socially shaped ideas, such as those of the male natural scientist, are shaken thanks to such offers. However, gender-equitable education at the Science Olympiad must ensure that well-intentioned, gender-specific support can convey the image of women in need of support and thus stigmatize them. Furthermore, the survey showed that our competition format motivates participants less to participate than participants.

What can we do?

How can our competition appeal to all genders? How can we support participants without stigmatizing them? How can we challenge stereotypical gender concepts and offer role models from science for all young people? In an exchange with experts from the educational sciences and the volunteers of the Olympics, we found answers to these questions. These can be read as concrete recommendations for action for a gender-equitable Science Olympiad in our gender concept.

About the author: Nicole Schäfer is an educational scientist and has been working as a coordinator at the Science Olympiad since September 2018. She heads the "Equal Opportunities Education" project and looks forward to your feedback.