What do women call sexual harassment

Sexual violence against women: not my shame

The anger remains, even without the role of victim. Our author Gilda Sahebi believes that stories of victims of sexual violence can be told differently. 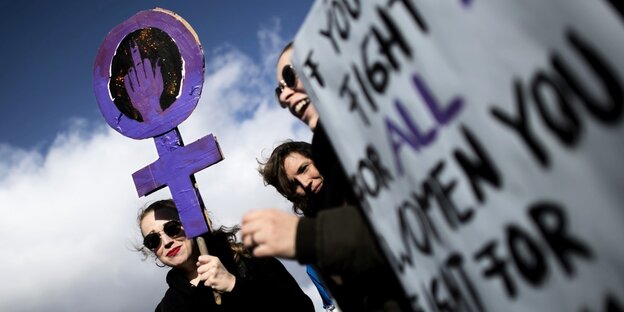 Angry because of the countless sexual harassment: a middle finger towards the perpetrator Photo: Stefan Boness / IPON

In her book "King Kong Theory", the French feminist Virginie Despentes writes about how she was raped by three men when she was 17. What she says about her life after the rape is particularly fond of me. In our society, Despentes says, women learn to be weak as soon as they are attacked. She writes: "As a traumatic event, rape has to leave traces that can be displayed as visibly and decoratively as possible: fear of men, fear of the dark, fear of independence."

I think of these sentences when I see the video “Man's Worlds”. 15 minutes in length, best airtime on Pro7, millions of people have now seen this video online; The time slot was provided by entertainers Joko and Klaas, but they were not involved in the creation of the video.

The video shows women who have experienced sexual harassment, abuse, rape. You are surrounded by darkness. I see motionless women as if they are rigid with fear. These women, in this dark room, in this basement, almost like dolls. Frozen with fear? Frozen with anger? I see women who are victims. Victims of men. Probably the oldest story in history. A story told by men. And we believe them.

For me, it brings up “men's worlds” again: the feeling of being a victim. I feel that shame again. She accompanied me for years, since the day I experienced what sex can be. A means of violence. A means of humiliation. A means of power. Shame. At that time it crawled into me, into my body, into my mind. Made me sick. Countless hospital stays, perplexed doctors, I was considered exhausted, incurable. Little did I know that it was the feeling of being at the mercy of the world and the fear that made my body sick.

Shame and pain and anger

The moment it happens - sexual abuse, harassment, hatred - we are victims. But how long should we stay in the role? One month? A year? A whole life? As long as it should be in our male-dominated society? Do we have to reproduce the victim role over and over again?

I believed the story. For years. I am a victim of men. Victim of my story. Victim of my circumstances. The bad men. They bring shame, they bring pain. My happiness, my health, my integrity depend on what men do, how they behave, whether they respect women or not. I was angry.

I was angry when a senior doctor called all of us medical students "Uschi" because he didn't feel like memorizing the names of us women while the men's names passed his lips without any problems. I was furious when an editor wrote me nightly messages from the hotel bar, he was thinking of me, he could do a lot for me and my career if I wanted to.

I was furious when a man in the park bared his penis and waved it around in front of me. I was angry when a journalist stuck his tongue down my throat while I was drunk in a bar in the evening and I had to push him away to make him stop. I was angry, outraged, shocked. Only: Behind all the anger there was always the feeling of being at the mercy. To be angry but powerless. Even when I told others about it. Even if I resisted. I stayed in the role of victim.

In our society women are required to behave like victims when they have become victims. A woman who, like Virginie Despentes, is raped while hitchhiking and continues to hitchhike after the rape? Unheard of. Is she not afraid? But she is afraid.

A woman who has experienced sexual abuse and continues to enjoy sex and promiscuity? Unbearable. Isn't she shaken? But she has to be shaken. A woman who has been raped and does not cry, not frightened, not traumatized in court? Incredible. Is it not destroyed? But it has to be destroyed.

In contrast, a “strong” woman is only a woman if she successfully fulfills all the roles that she has to fulfill, and without complaining. But why do we need images of “strong” women at all? Why do we only use the word "strong" in men when we mean they have muscle? “Woman” alone is not enough to be associated with strength. If we just say “woman”, the thought of weakness is closer than of strength. That's the narrative.

When I reached the bottom, in the cellar, in the dark, marked by illness, tired of life, rigid, motionless, I asked myself: What if I decide not to believe this story anymore?

The force of their stories

I want to hear the stories of the women who stand down there in the basement of the men's world. I admire them for their courage to stand there and tell their stories. I feel close to them, even if I cannot empathize with their experiences, because every person feels, experiences and feels such a trauma differently. It is important that they tell their stories. Not only so that they can be heard by those who cannot imagine a woman's everyday life in this society. Not just to change something. But also to get out of the dark cellar in which we have hidden our stories for years.

Yes, I want to hear the stories of these women, but not in the dark basement. We all have to face these stories, we have to see what happens in our society. But if women choose how to tell their stories of sexual violence - would it really be that way? In darkness, in silence, in rigidity? In the basement? Or maybe you prefer with strength, with light, with power? Maybe with the sentence: I was a victim. But I no longer allow you to victimize me over and over again.

The force of their stories would lose nothing, on the contrary, we would see how much resilience and how much will to live it takes to continue after such a trauma. We don't need a cellar, a ghostly get-up, or a victim staging to understand that.

It would have been more honest if Joko and Klaas had guided through the exhibition themselves. It is their platform. I see the women in this video through a male gaze. Frozen, silent, shocked.

Freed from the feeling of sacrifice

And I see that nobody notices how disturbing it actually is what we are seeing. Seeing women as victims is normal for us. Nobody cares that the women stand in the semi-darkness, do not move, have rigid faces, seem almost ghostly, as if they are no longer really alive because of what has been done to them. It's so normal for all of us to see women this way that we don't even notice it anymore.

It's just my own feeling that I can describe. Every woman who has experienced sexual violence has a different view, sees this video differently, feels her story differently. For me, however, the feeling of being a victim was a prison that I had locked myself into. Nobody made me do it.

Perpetrators want to make us victims for a lifetime. I'm not doing them this favor anymore

I didn't choose what happened to me. But I believed that the way after the abuse was mapped out. After all, it was what I saw everywhere, got to see: women who experience sexual abuse, assault, hatred are marked. This one moment, this terrible time in her life, these traumatizing experiences shape the rest of her life and bind her to the perpetrator, to the men. That is not true. I stopped believing the story.

Today I know that this is exactly what the perpetrators want: to make us victims for a lifetime. For them, knowing that we are in the role of victim is satisfaction and reward at the same time. I'm not doing them this favor anymore. It has been a long, painful road to rid myself of this sense of sacrifice. To get well, to heal. To understand: it is not my shame. It is the perpetrator's shame. And I don't take them from them anymore.