Why have companies come together to form monopolies?

The network represents a “natural monopoly” 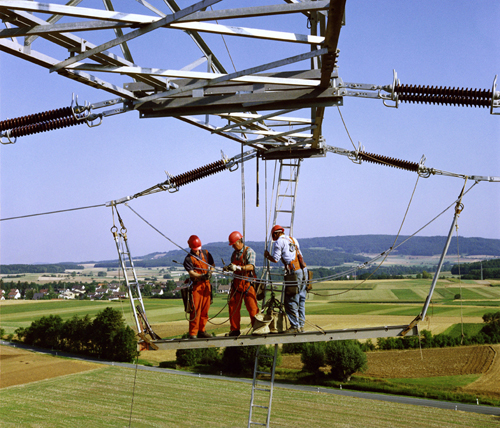 In the liberalized electricity market, everyone can basically buy their electricity where they want. In this respect, this electricity market works in a very similar way as if the customer were to order a load of briquettes or a full tank of oil from some fuel dealer.

Nevertheless, the electricity market should not be imagined as simply as trading in fuel. It can also easily lead to misconceptions if, as is often the case, electricity and gas are counted as “line-based energies”. Because electricity is fundamentally different from gas or oil, and a pipeline is completely different from a power line:

If electricity and gas are often summarized under the heading of “line-based energies”, there is another reason: both power lines and gas pipelines cannot be laid arbitrarily through the landscape. This applies even more to complete networks with their numerous branches and links. It would be a huge burden on the environment and a waste of money if every energy provider were to lay their own pipeline network right up to the customer.

As a rule, a single network will have to suffice for the reasons mentioned. In terms of power supply, this network was created over many decades. It all started with the island-like distribution networks of the first public utilities and overland utilities, which gradually grew together, being overlaid by the so-called composite network for supraregional electricity transport.

Power supply networks have long since left national borders behind them. Today the German power supply is part of a comprehensive network from Portugal to Poland and from Jutland to Sicily, in whose lines the electricity oscillates at the same frequency everywhere. The responsibility for the functioning of this system rests with the large network operators who have come together in the UCTE. In Germany, this includes the so-called network companies, which at the same time generate over eighty percent of the electricity and are responsible for maintaining the balance between electricity production and demand in their respective work areas.

There is practically no alternative to this network of power supply, as it has developed and proven over a hundred years. It would be neither possible nor desirable to cover the landscape with further such nets.

The economists therefore give the power grid the status of a “natural monopoly”. You mean to say that the network monopoly results from practical constraints which cannot be overcome with the usual antitrust instruments for the elimination of monopolies.

To compensate for this, the electricity suppliers were subject to extensive official controls: For example, they had to have their prices for tariff customers as well as their investment projects approved by the supervisory authority. This should prevent abuse of the granted monopoly position.

For a long time, this special position of the electricity industry was perceived as completely normal. Most of the power supply belonged to the public sector anyway. Although, unlike the post office and the railroad, it was governed by private law, like these it was seen as part of the state's general interest.

Historically, the networks were created as a necessary appendage to the power plants in order to be able to distribute the generated electrical energy to the consumers. They were as inseparable from the power supply as the rails were from the railroad.

In addition, electronic data processing and communication technology did not yet exist to cope with the extensive metering and billing problems associated with the opening of the networks. The use of the networks by third parties meant a potential for interference that could only have been limited by a disproportionate effort in measuring, computing, control and regulation technology.

Until the nineties, the electricity industry stubbornly resisted the proposals of the deregulation commission - here in an edition of the StromDISKUSSION series published by the "Informationszentrale der Elektrizitätswirtschaft" (IZE).

The power supply is targeted by the Deregulation Commission

This point of view only began to change in the 1980s, when an economic paradigm shift set in in politics and economics around the world, which is still going on and which helped “neoliberalism” achieve a breakthrough. Above all, an “independent commission of experts for the dismantling of regulations contrary to the market”, set up by the federal government at the end of 1987, sharply criticized the regional monopolies of the electricity suppliers, which were previously permitted under cartel law and additionally secured by demarcation and concession agreements. In a final report submitted by the Deregulation Commission in March 1991, it also expressly doubted the technical and economic constraints that the electricity industry had previously asserted to justify its exclusion from competition. She proposed that the operators of electricity networks should be subject to a general transmission obligation, for which it was necessary to separate network operation as an independent service from the electricity supplier's other business.

In June 1992 the Federal Cabinet approved most of the deregulation commission's proposals after a working group of the coalition of the Union and FDP had dealt with them for a year and a half. In particular, this included the drastic proposals for deregulating the electricity industry. For the rest, however, they first waited to see what would happen at European level.

In January 1992 in Brussels, the EC Commission presented two draft directives which were intended to facilitate access to the grids of other member states for large electricity and gas customers from the beginning of 1993 and to result in complete liberalization in 1996. Their concept was generally approved by the electricity-consuming industry, but was vehemently rejected by the electricity industry and also felt by most governments to be immature. The Brussels plans for “third party access” met with stubborn resistance from France, which refused to give up the idea of ​​“public service” or the monopoly position of the state-owned electricity company EDF. After much back-and-forth, the European Union's economics and energy ministers agreed in June 1996 on a directive on the liberalization of the electricity market, which came into force at the beginning of 1997 and which had to be transposed into national law by the member states of the EU within two years. The special wishes of France were taken into account by the so-called sole buyer model, which each member country could choose as an alternative to the negotiated network access.

Germany is both a pioneer and a tail light

The EU directive obliged the members of the European Union to gradually open up their national electricity markets; namely by at least 23 percent by 1999, by approx. 27 percent by 2000 and by approx. 33 percent by 2003. The new German regulation went beyond the requirements from Brussels: It was not satisfied with a gradual opening of the market initially limited to large consumers, but released the electricity industry into competition from one day to the next.

The corresponding article law for the amendment of the energy law was passed by the Bundestag in November 1997 and came into force on April 29, 1998. It replaced the previously applicable Energy Industry Act and removed the closed supply areas that had hindered competition in the grid-based energy sources of electricity and gas until then. Since then, network operators have been obliged to conduct electricity from other providers through their networks. You may only refuse the transmission if there is no capacity or if this would endanger renewable energies or combined heat and power plants. The municipalities are no longer allowed to grant exclusive rights of way, but can still demand concession fees.

However, the new Energy Industry Act suffered from a nasty birth defect that made the radical opening of the market into a gesture that was as pompous as it was empty of content: it was based on the model of "negotiated network access", according to which the economic groups involved are allowed and able to regulate the details of network access themselves.

The negotiated network access was actually still envisaged as a normal case in Article 17 of the first EU directive, which came into force in February 1997. Alternatively, the member states could opt for a “regulated network access system” (Paragraph 4) or for the “sole purchaser system” (Article 18).

From an economic point of view, however, negotiated third party access was a freak from the start: Both the German government and the EU Commission should have known that a “natural monopoly” like network operation can only be neutralized when it is placed under strict government supervision. It was simply naïve to leave the regulation of network usage to the business groups involved and to want to prevent the discrimination of competitors through subsequent abuse control by the cartel authorities.

All other EU states also saw this and opted for “regulated network access”, in which a regulatory authority stipulates the modalities of network use and the level of the network charge from the outset. Even France left its hard-fought single-buyer model by the wayside. Only the German government consistently took the wrong track of "negotiated network access". It gave the German electricity industry a discrimination against new market participants, which was forbidden by the new energy law, but which in fact lasted for years, until a regulatory authority for network operation had to be introduced in the end.

From transmission to "network use"