Chemically what is spoiled milk

Experiments:
Experiment: from milk to whey
Try: My yogurt is alive! You can easily make yogurt yourself
Experiment: The principle of quark production
Try: This is how it works! 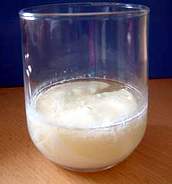 Sour milk - how disgusting! If you have ever drunk a large sip of sour milk, you know what is meant here (see also Why does milk get sour?). Nevertheless, products are offered that are made from sour milk. Who is buying something like that? - you will think. If you know which products are behind the sour milk products, you will understand why there is a huge supply and an equally great demand.

Sour milk products are all made by fermentation from pasteurized milk or cream by adding special microorganisms. The microorganisms, which are usually lactic acid bacteria (e.g. Lactobacillus- and StreptococciSpecies), convert part of the lactose contained in milk into lactic acid. Due to the acid that forms, the pH value drops to 4-5 and the milk protein coagulates (denatures). This process is also known as "curdling" the milk. Since the denatured protein is easier for humans to digest, sour milk products are easy to digest. The resulting lactic acid and the cultures of the still living microorganisms also promote bowel activity and promote regular digestion.

The taste depends on the degree of sourness. It can be very mild but also very sour. The consistency of the sour milk products offered ranges from liquid to firm.
From the diverse range of sour milk products, the most important ones are briefly presented here:

Sour milk
Sour milk has a pH value of 4-5 and contains approx. 0.5-0.9% lactic acid. The strains of bacteria used for coagulation are usually Streptococcus lactis and Streptococcus cremoris. If the product is solid, it is called thick milk. Sour milk and curd milk are sold pure in the fat content levels specified above and in many different flavors.
In the past, you could easily make your own sour milk, all you had to do was leave a small bowl of milk at room temperature overnight. Today it no longer works, what forms from today's fresh milk overnight - or even after several nights - is bitter and simply inedible. The reason is very simple: since cows are milked mechanically these days and their milk is no longer exposed to the stable atmosphere with the bacteria it contains, this natural fermentation can no longer occur. Bacteria have been removed from the purchased milk by means of a heat treatment, so that the sour milk produced in this process can be traced back to incorrect fermentation caused by foreign germs (for example from the air).

yogurt
Yogurt is one of the most popular sour milk products. The two yoghurt cultures are used to produce the pasteurized milk Lactobacillus bulgaricus and Streptococcus thermophilus added. The subsequent heating to a temperature of 42-45 C causes the bacteria to multiply and thus also to the souring and curdling of the milk. Fermentation is interrupted after 2-3 hours by cooling down. This gives the yoghurt its desired consistency, which, depending on the process, ranges from liquid to firm. Solid yoghurt is matured in a cup, while drinking yoghurt is acidified in large tanks and then bottled. The pH value of ready-to-eat yoghurt is around 4-4.2. The lactic acid content is 0.7-1.1%.
A special yogurt comes with Lactobacillus acidophilus and Lactobacillus bifidus produced. It is sold in stores as "mild yoghurt". The addition of fruits or fruit preparations leads to "fruit yoghurt". Depending on the fat content level (see above), a distinction is made between skimmed milk yogurt, low-fat yogurt, yogurt and cream yogurt.

Quark
Quark is also a sour milk product. In contrast to the other sour milk products - apart from the cheese - here the thick milk is cut into small pieces and stirred. The liquid that is deposited in the process, the whey, is separated off by centrifugation and is sold as drinking whey or is further processed into whey products. The quark is now creamy and adjusted to different fat content levels by adding cream. The most common quark types contain 10% to 60% fat in the dry matter.

Sour cream products
Not to be forgotten are the sour milk products made from sour cream. This includes special types of butter such as B. the sour cream butter and the mildly soured butter.

Further texts on the subject of `` milk ''