Which country has the best seafood

With nearly 1,800 km of coastline, it's no wonder that fish and seafood play a huge role in Portuguese cuisine. You can find out which fish dishes and specialties you shouldn't miss in the following article. 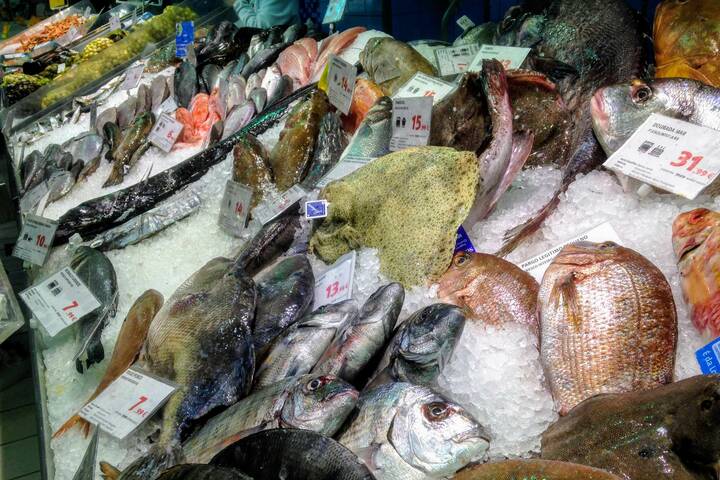 It is early morning and low tide on the Algarve beach. In a camouflage-colored neoprene suit, a man with flippers, an orange buoy, a net and a harpoon gets out of the car. Later a fishing boat passes near the shore. A long gully is visible behind its stern. It has avoided the little light barrel. Every ten seconds to one minute, part of the diver comes out of the water.

We would like to invite you to immerse yourself in the Portuguese culture connected to the ocean. Are you curious to see what's on the table in Mediterranean fish cuisine?

The Portuguese cannot do without the sea

The regions of the Atlantic and the Algarve are very attractive to the people of Portugal. The Lisbon metropolitan area alone has 2.8 million inhabitants, including the Setúbal peninsula. The remaining of the ten most populous cities are completely on or near the sea: Amadora, Braga, Coimbra, Funchal (on Madeira), Porto and Vila Nova de Gaia.

The Portuguese are very fond of fish and much more than meat. Preparing fish, for example grilling with family and friends, is of great social importance in Portugal. Most people can afford the inexpensive sardines, mackerel and cod - given their purchasing power, which is on average about half that of Germany.

The demand for fish in Portugal is greater than what local fishermen bring ashore. A lot of fish is imported into the country by the sea. Cod, the fish for the Portuguese national dish Bacalhau, comes from abroad: from Norway and Newfoundland. The Atlantic salmon also comes from Scandinavia.

In Sagres` fishing port you will find the richest fish market in Portugal. Up to 200 different fish species can be found off Portugal. Many of them are also on the table here in Germany. The Portuguese bake, grill, fry, cook or marinate fish.

The most popular marine fish in Portugal

The range of marine fish ranges from bonito, a smaller, related form of tuna, to two-banded bream (safia) to goat bream (sargo). The rich selection continues with sea bream (dourada), cod (bacalhau) and mackerel (carapau). Fishermen can easily catch the latter from the illuminated boat on warm evenings.

The sardine (sardinha) plays a major role among fish dishes. Not to be forgotten are the anchovies (anchova), the flatfish sole (linguado) and the turbot (pregado) and sea bass (robalo).

The eagle fish, which can weigh up to 75 kilograms in the wild, is often seen in fish halls as "Corvina a posta" cut into slices. He is low in fat. That is why »Corvina« is tasty when grilled or steamed with juicy vegetables.

The nature of the sea bream is to be male first in its life, up to a height of 30 centimeters and two years of age. After that, she transforms into a female. With a two-banded bream it is the other way round: They all grow up as females and from one to two years of age male fish. The black scabbard fish (espada) is also a specialty: caught with one and a half kilometers of lines off Madeira and the Portuguese mainland, it was not scientifically determined until 1839.

The spearfishing blue marlin (marlin azul) is the fish immortalized by Hemingway in "The Old Man and the Sea". The writer often went big game fishing. This is the name given to the hunt for the big predatory fish that inhabit the open sea. Tuna (tuna) and swordfish (espadarte) are also part of it. In 2008 the fisherman Hugo Silva caught a blue marlin weighing 418 kilograms off Sesimbra, south of Lisbon, after a six and a half hour fight. The hot spots of big game fishing are in Madeira and the Azores.

On the menu of a »Marisqueira«, a fish restaurant, the following dishes arouse the appetite for food:

The loyal friend of the Portuguese: Stockfish - Bacalhau

This name for Portugal's national dish is proverbial. Stockfish is originally what the name says: a fish hung on sticks or poles to dry. Cod or young cod (cod), Mediterranean ling (maruca), haddock (arinca) or saithe (escamudo) are included. Clipfish (bacalhau seco) is heavily salted stockfish.

Even before cooking, stick fish and clipfish are soaked in water for up to three days and changed several times. Later, when cooking, the pungent fish odor disappears. The Bacalhau is soft and juicy on the plate. The culture of preservation originated in 8th century Norway.

The Portuguese are great at preparing stockfish. Although some eat it raw: the average consumption in Portugal is seven kilograms per person per year in dried bacalhau and 15 kilograms in stockfish dishes.

The tuna catch in Portugal

The local fishermen in the Algarve have been catching tuna for 2,000 years: bluefin tuna. Named for its red meat, the edible fish is also known as bluefin tuna. It moves up to 80 kilometers per hour. Although a fish, the bluefin tuna is a warm-blooded animal: with a body temperature of almost 27 ° C.

Up to 1972, up to 150 fishing families lived in the area of ​​today's Ria Formosa Natural Park: always during the tuna season. This lasted from March to September. The tuna then migrate to reproduce from the Atlantic, past the Strait of Gibraltar, into the western Mediterranean.

The stocks of Atlantic tuna were dangerously declining, and so the EU imposed a fishing ban in a 200-kilometer zone in the Atlantic. In 1972 the last fishermen in the mouth of the Gilão River also dismantled their gillnets. They had been miles long and fastened to the sea floor.

The Japanese eat 80 percent of the bluefin tuna catch today, for example as sashimi or sushi. With 2.7 million euros from its advertising budget, a Tokyo restaurant chain bought a 278 kilogram bluefin tuna from the region in January 2019.

In the Azores, fishermen traditionally catch tuna with fishing lines from boats. The other side of the coin was that this gentle way of fishing has not been able to keep up with industrial tuna fishing on the world's oceans since the 1970s. On the Azores island of São Jorge, the owners of the tuna factory in Santa Catarina are now relying on handcraft and product innovations with herbs and sweet potatoes. Supported by EU subsidies, they may find a niche in the local Portuguese market.

With its lakes, reservoirs and rivers, the Iberian country has a rich selection of tasty freshwater fish: eel (enguia), barb (barbo), perch (perca), Iberian nasal (boga) and largemouth bass (achigâ). On the menu, as with us, you will find pike (lucio), carp (carpa), salmon (salmâo) and rainbow trout (truta arco iris). Catfish (peixe gato) and pikeperch (lucioperca) are also native to the Mediterranean country.

How to recognize fresh fish

If fish and seafood smell very little of fish and a little of the sea, then they are fresh. Only stockfish can smell stronger. Fresh fish have shiny scales. Your eyes are clear and protruding slightly. The gills glow red. Fillet should be elastic and firm, shiny and smell neutral.

The eyes and body of a fresh octopus are shiny. If you buy it frozen, it should have the characteristics of a non-frozen pulpo after thawing. Mussels are bought with closed shells.

How do the Portuguese get their seafood?

The shell collectors mark their terrain in lagoons and at the mouths of the rivers with pieces of wood. You can recognize clams (amêijoas) - the individualists among the mussels - by the three millimeter large air holes in the bottom: two at a distance of two centimeters. They pick up the marine animals with buckets and quivers, hoes and penknives. The working hours of the "Mariscadores" change by an hour from day to day, due to the tides.

After the catch is done, they bring their prey to the wholesaler. With a delivery note with the name of the mussel collector, the variety and origin, the fresh delicacies travel on to a purification plant. In one of these, in Olhão, the employees clean them with UV light or ozone and give them to retail outlets in one-kilo bags, for example to the fish market in Quarteira.

Prawns and crabs in the fish market in Quarteira in the Algarve (Photo: Falktext)

Freshly caught seafood on the table

Portugal's marisqueiras invite you to tasty "frutos do mar":

The main courses include:

"Not everything that goes into the net is fish."
("Nem tudo que vem àrede é peixe", Portuguese proverb)

On the Algarve beach, a fishing line with hooks lies next to the scallop, as if lost. The diver with the harpoon came out of the water with a full net. His fishing gear indicated that he was hunting octopuses and small fish.

In 2017 bluefin tuna stocks recovered. The catch quotas could be increased moderately. Theoretically, the cutter fishermen have time from May 26th to June 24th. In practice, it ends around the beginning of June - for the benefit of the tuna deposits.