How was the Suez Canal built

The answer to the question of how the Suez Canal was built will hardly be sought at Königswart Castle. Attentive readers of the "Stories of the Königswarter Museum" on the pages of the Egerer Tagblatt can certainly no longer surprise them today. So let's leaf through the extensive documentation of the princely palace library and refresh our historical and technical knowledge of this overwhelming structure. 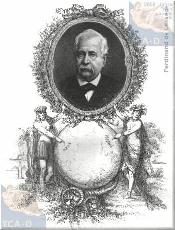 First, let's go back a long way in history. Even the Egyptian pharaohs toyed with the idea of ​​deepening the canal that was to connect the Red Sea with the Mediterranean. They wanted to solve this problem through a system of smaller channels. Pharaoh Senusret I made the first attempts to connect the Nile with the Red Sea, 3940 years ago! At the end of the 7th century BC, Pharaoh Necho II had a canal deepened, the remains of which can still be seen in the terrain after Wadi Tumilat. Shortly after the Islamic conquest of Egypt in 636-640, Amr Ibn el-As had the canal repaired, but in 767 Abbasid Caliph El-Mansur had this waterway closed to limit the supply of the rebels in the Nile Delta. In all of these oldest attempts it was always a matter of a formation of smaller channels. On the other hand, the French Emperor Napoleon I considered the conception of a large canal that would also be suitable for large overseas ships and expected it to be a devastating blow to the English trade economy. In 1798, however, Napoleon's inspectors put an end to any further debate by stating that the level of the Red Sea was nine meters higher than the level of the Mediterranean Sea. It was not until 1847 that new measurements showed that the French inspectors had measured incorrectly fifty years ago and that the sea levels of both seas were largely the same. Well, you measure twice ...

Ferdinand de Lesseps was born on November 19, 1805 in Versailles into the family of French diplomats and was enthusiastic about the culture of the Middle East and its potential for the development of trade. As a diplomat he often visited these parts of the Middle East and made new contacts here. In Egypt he became closely acquainted with the members of the family of the Ottoman governor, the Egyptian pasha and especially with the young prince Muhammed Said. When the Pasha Abbas died in 1854, probably as a result of an assassination, and Lesseps' childhood friend was appointed the new Egyptian viceroy, Ferdinand de Lesseps hurried to Egypt, where Muhammad Said gave him a more than warm welcome.

As an enthusiastic engineer, he began again urgently to convince investors from France, Italy, Austria, Egypt, Russia and the United States of America. In England he did not find any support, because this supported the expansion of the railway network and was therefore not interested in devaluing an investment with a competing project. During his lectures in London, which were intended to make the project known, Lesseps met with mockery and reservations. For example, the well-known railway engineer Robert Stephenson assured that the canal was becoming more muddy and would become a single “big, stinking ditch”. Ultimately, Lesseps convinced the French Emperor Napoleon III. In 1856 he was appointed consul of Cairo and at the same time received a concession to build and operate the Suez Canal. The actual work began in 1859. The Egyptian Pasha Muhammed Said acquired 44% of the company, thereby maintaining it financially.

The Pasha Ismáil invited a number of rare guests to the ceremonial opening on November 17, 1869. The French Empress Eugenie, the Austrian Emperor, the Prince of Wales, and princes from Prussia and the Netherlands traveled to this place. More than six thousand spectators followed the fireworks in the port of Said. Two orders of ships departed simultaneously from the northern and southern sides of the canal to meet at Ismaili. Giuseppe Verdi composed his famous Aida for the grand opening of the Cairo Opera House.

The Suez Canal is 161 kilometers long, about 13 meters deep and between 80 and 180 meters wide. Thanks to its construction, the journey by ship to the Indian suburbs was shortened by 10,000 km. Today around 20,000 ships pass through the Suez Canal every year. The French engineer Ferdinand de Lesseps began in 1879, at the age of 74, to plan a new canal across the South American Panama. Work began in 1881, but that is another chapter. Our story today is therefore about the successful efforts to realize dreams and visions, and this against all objections and bad gossip of others. In 1884 Ferdinand de Lesseps was appointed a member of the French Academy. He died on December 7, 1894.