Sicily is part of Italy

Sicily is the largest and southernmost region of Italy and the largest island in the Mediterranean, with a coastline of 1,152 km. The 3 km wide Strait of Messina on the northeastern tip of Sicily separates the island from the mainland (Calabria region). Near Trapani, in the west of the island, Sicily is only about 150 km from the African coast.

Agriculture has played a major role since ancient times, and around 10% of the population still work in this sector today. Fishing is also an important industry. The industry has developed mainly around the cities of Palermo and Catania, with a focus on microelectronics and petrochemicals. Tourism, on which many jobs depend directly and indirectly, is becoming more and more important.

Hardly any other region in Italy is richer in historical and archaeological evidence than Sicily. Greeks, Romans, Carthaginians, Normans, Byzantines, Arabs and Spaniards ruled the island and left their mark on architecture, art, folk traditions and language. The most beautiful and best preserved Greek temples, as well as the most imposing Norman domes can be found here. The island is abundant in baroque churches and palaces and Byzantine mosaics. This cultural wealth, together with the wonderful beaches of Sicily, make up the charm of Sicily, which attracts more and more tourists.

On the other hand, the problems of Sicily are clearly visible. The high unemployment, which is considerably higher than the Italian average, the lack of transport infrastructure, especially in the interior of the island, and above all the mafia, of which tourists have nothing to fear, but which has permeated large parts of the region's economy and in many areas more has to say than the Italian state. All of this weighs heavily on this beautiful region, which despite numerous aid programs from the EU and the Italian state (which often disappear in dark channels) is still one of Europe's problem children. 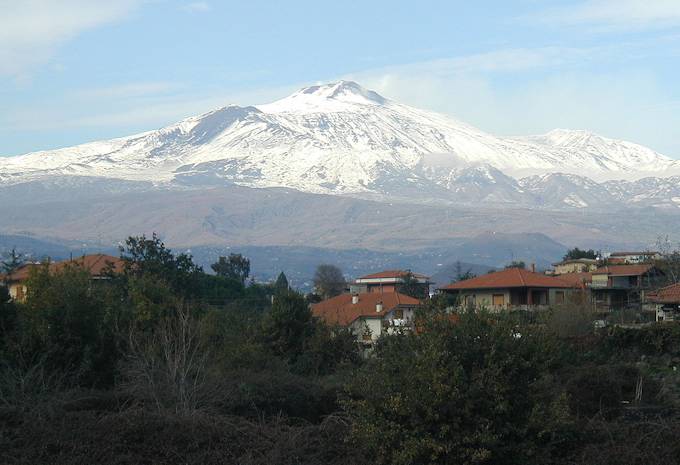 If you want to go to Sicily by car without visiting Calabria, there is a motorway between Naples and Reggio Calabria (730 km + 45 minutes ferryfrom Calabria to Sicily) is an alternative that many motorists also prefer: it is much more relaxing, especially in midsummer Ferry from Naples to Palermo to take. You also save a lot of time. The crossing takes approx. 7.5 hours and it is best to take them at night.

The cities of Sicily:

Palermo
Palermo is a fascinating city, but splendor and misery are very close together here.

Cefalù
The picturesque old town and the Norman Cathedral are the main attractions of this town.

Catania
The baroque palaces and the location in one of the most beautiful regions of Sicily make Catania absolutely worth seeing.

Taormina
Taormina was one of the most popular tourist centers in Italy as early as the 19th century.

Trapani
Between sea and mountains and framed by the Egadi Islands in the west and Mount Erice in the east.

Messina
Messina is also called the gateway to Sicily and is a popular starting point for Mediterranean cruises.

Ragusa
In 2002 the old town of Ragusa was declared a UNESCO World Heritage Site because of its rich baroque architecture.

Syracuse
A visit to Syracuse is a journey into Sicily's Greco-Roman past.

Other worthwhile destinations in Sicily:

Etna volcano
Etna (3,343 m) is the highest and most active volcano in Europe.

Segesta
The rise and fall of the Greek city of Segesta is a typical Sicilian story.

The Valley of the Temples
The archaeological sites in Agrigento are some of the most impressive examples of Greek architecture. The islands around Sicily:

Favignana
Information and photos of this beautiful little spot that is still little known.

Lipari
About the largest and most visited of the seven Aeolian Islands, with lots of information and photos.

Stromboli
The climb to the top of the volcano, which is in constant activity, is an unforgettable experience.

Frederick II
A German emperor who ruled in Sicily, which under him became one of the most prosperous regions in Europe.

A video about Sicily worth seeing:

This German-language video of the Italian television station RAI about Sicily shows the scenic beauties, the cultural highlights and the folk traditions of this region. For better visibility of the video, click the full screen mode icon in the lower right corner.

For the eighth time in a row: