How much money do truck drivers make

How much do you earn as a professional driver? 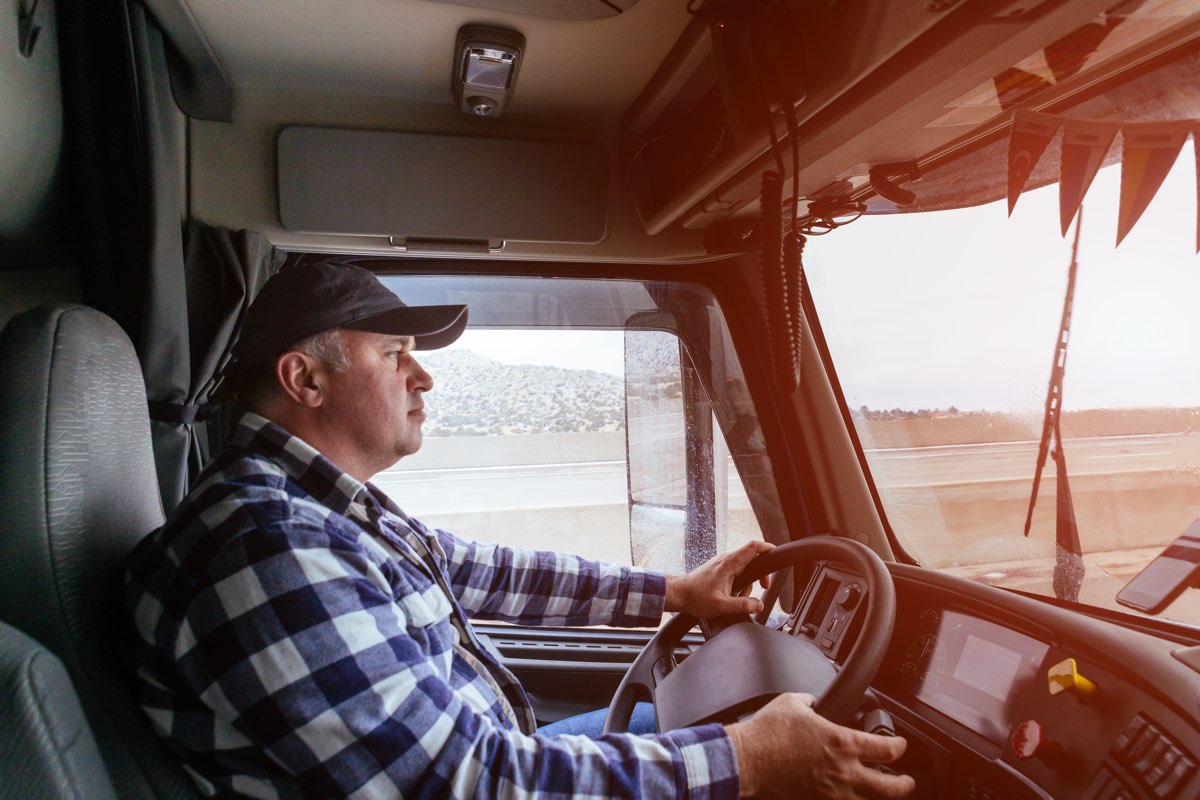 So it goes on:

• Truck driver wages compared to other professions in a wage comparison.

The starting salary for truck drivers is rarely more than € 1,800 gross per month.

In large companies As a rule, you get more wages than in small businesses whose fleet only consists of a few trucks.

Additional training such as the ADR certificate tank or specialization (e.g. special or heavy transports) can have a positive effect on the professional driver's income. The mobile crane driver's salary is also significantly higher on average at over € 3000 gross per month.

Cool truck, little wages. Not with Paul Kramer, ex-truck driver. He says "good work has to be expressed in salary".

Truck drivers' wages have been rising steadily for years. A reason to celebrate?

The good news - truck driver wages are rising steadily! The latest analyzes of current wage developments show a wage increase of 2.4 percent. Around 10,000 professional drivers who work for German haulage companies and whose earnings have risen continuously in recent years were surveyed.

So is there any reason to cheer? Unfortunately not. Because with the existing low wage level, this increase in the salary is hardly noticeable on the bank account. The truck driver's job is still one of the top 20 poorly paid professions. 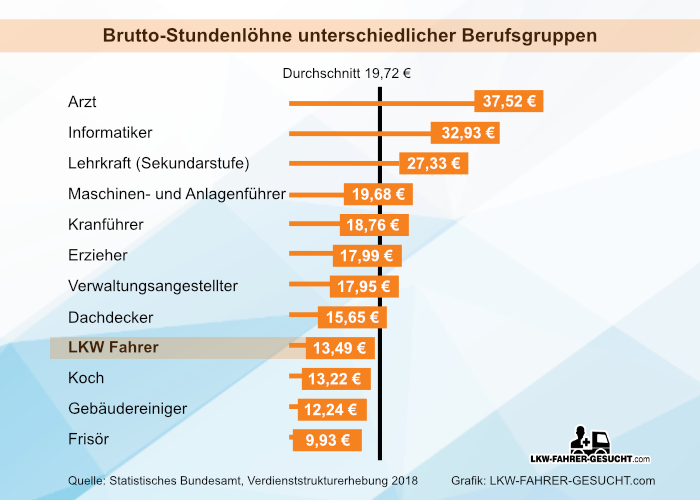 The working conditions of truck drivers are improving very slowly

Many professional drivers still work under difficult conditions and earn too little for it. Unfortunately, working hours of up to 60 hours per week are not uncommon. If the goods themselves then have to be unloaded, the hourly account increases to up to 80 hours.

Then there is the bad image of the industry and the truck drivers. Wrong, because the days when a truck driver transported goods from A to B are over. Nowadays a truck is usually bursting with technical on-board devices that need to be operated.

Skilled labor shortage - why does demand not regulate the appropriate wage?

In the meantime, German freight forwarders openly admit that they made mistakes. But the willingness of German truck drivers to do this job for a low salary has decreased significantly. The shortage of skilled workers will not only keep haulage companies busy in the future, despite cheap labor from abroad. Because without a professional driver, the shelves in the supermarkets remain empty, which in turn harms the German economy and thus us too.

The important decision of the finance court Berlin-Brandenburg

In order to counteract wage dumping, the Berlin-Brandenburg Finance Court pronounced an important judgment in January 2019, which is not yet legally binding. After two Polish haulage companies sued the German minimum wage law, the tax court ruled that employers from Germany and abroad should pay at least the statutory minimum wage in Germany of currently 9.35 euros per hour during the time their employees are working in Germany (As of 01/01/2020) have to pay.

This is what truck drivers earn on average in Germany

There is a wide range of salaries, because various factors determine the amount, such as:

A novice driver earns around EUR 1,800 per month, while experienced professional drivers earn an average of EUR 2,500 gross per month. In the area of ​​dangerous goods transport, there may be more options due to higher qualifications. Earning opportunities in the direction of EUR 4,000 gross are rather the exception.

The fact that the urgently needed young drivers are missing is also due to the poor pay during the three-year training. The starting salary in the first year for the job of professional driver is between 530 and 670 Eur. In the second year of training, a wage between 560 and 720 Eur. Is to be expected, in the third year the trainee earns between 600 and 800 Eur. There are none fixed tariffs for this training occupation and thus the payment depends on the respective employer. Young truckers are also at risk due to the elimination of compulsory military service.

The Germany-wide paycheck: The regional differences in the payment of truck drivers are drastic.

The extreme difference in the salary of professional drivers between the old and new federal states is still frightening and unfair. Saxony, Mecklenburg-Western Pomerania as well as Brandenburg and Thuringia are also far behind with an average gross salary of between 1,700 and 1,800 euros.

The truck driver in Hamburg is around 1,000 euros richer a month with the same number of hours per week. In the industrialized federal states such as Baden-Württemberg and Bavaria, professional drivers are also paid significantly better.

For a meaningful salary ranking, we at LKW-Fahrer-gesucht.com have compiled and evaluated many 10,000 data sets from various sources into one database.

Our information in the table above is average gross wages based on "male truck drivers with 5-1o years of professional experience in freight transport working 45 hours a week". Additional services such as expenses, bonuses or the like were not taken into account.

Regulated working hours and appropriate pay. What has to change?

Both the employers in the haulage companies and the responsible politicians are challenged. Everyone agrees on the grievances in the job and in the industry, but hardly anything is changing. Anyone who complains about the shortage of drivers must counteract them with coherent concepts. For the haulage companies, this means paying the truckers a reasonable wage, creating better working conditions and appreciating their performance.

Politicians also have to move and develop a real master plan in order to keep the industry competitive. Only fixed rules and laws guarantee fair competition and German economic growth.

UPDATE (January 2015) Due to current events, we once dealt with the subject of the minimum wage. Click here for the article: Minimum wage for truck drivers

What does a truck driver earn where?

In recent years there has been a lot of talk about the shortage of professional drivers in freight transport. From the point of view of the haulage companies, in contrast to the labor market figures, there is a shortage of occupation, which is why some market participants assumed that salaries for truck drivers in freight transport would rise sharply in the future 2-3 years ago. But how much does a truck driver really earn these days? What about the salary of professional drivers and truck drivers? And how big are the differences between the average wages for drivers in the regions?

Professional Driver Salary - Sources and Data Handling
In order to shed some light on the subject of professional driver salary - truck driver wages, we at LKW-Fahrer-gesucht.com have combined 10 thousand data sets from various sources (see infographic) into one database and created the above information graphic “Truck driver pay”.

The average truck driver's wage given per city refers to the gross wage for a male professional driver with 5-10 years of professional experience in freight transport and 45 hours of weekly work. Additional benefits and bonus payments or expenses at the end of the month based on those specified in the employment contract
Adding the wages of the truck drivers and increasing their gross and / or net salaries were not included.

Truck driver salary comparison - abnormalities
The difference between the lowest truck driver wages paid in Rostock and the wages in the cities with the highest wages paid for truck drivers in freight transport Stuttgart, Munich and Saarbrücken is on average more than 40%, which a truck driver in the south of the republic earns more. Or, to put it another way, the driver from Rostock has to work almost 72 hours longer with the hourly wage calculated for him (€ 1,597.76 divided by 180 hours of regular working time = € 8.88 gross) in order to achieve a truck driver with an almost high salary.

What does a truck driver earn on average?

A truck driver in Germany earns an average of € 2,347.50. However, the differences in salaries between eastern and southern Germany are considerable. This is how the truck driver earns in terms of approx

How much do you earn as a professional driver?