How did you get rich

Assets and income: when are you rich in Germany?

Inheritance makes wealthy people in Germany even richer, shows a current study by DIW. As a result, they inherit the most frequently and at the same time the highest amounts. According to the German Institute for Economic Research (DIW), almost half of the inheritance and donation volume goes to the richest ten percent of the beneficiaries.

The other 90 percent share the remaining half. “The inheritance wave exacerbates absolute wealth inequality,” analyzes DIW expert Markus Grabka. But how high do assets have to be in order to be able to say in Germany: "I am rich"?

For researcher Niehues, the upper middle class starts at 150 percent of the median monthly net income of almost 2,000 euros and goes up to two and a half times this amount: that would then be just under 4,900 euros. Income wealth begins for them above this threshold. Only 3.3 percent of households in Germany are “high-income”. According to this definition, 15 percent of the population belong to the upper middle class.

Stefan Bach, tax and distribution expert at the German Institute for Economic Research (DIW), however, places the borderline of the middle class higher up. For him, with 60,000 euros net per year, you are a “higher earner”, an intermediate step towards being rich in income. "Many of them still feel that they are middle-class, not just Mr. Merz," said Bach. 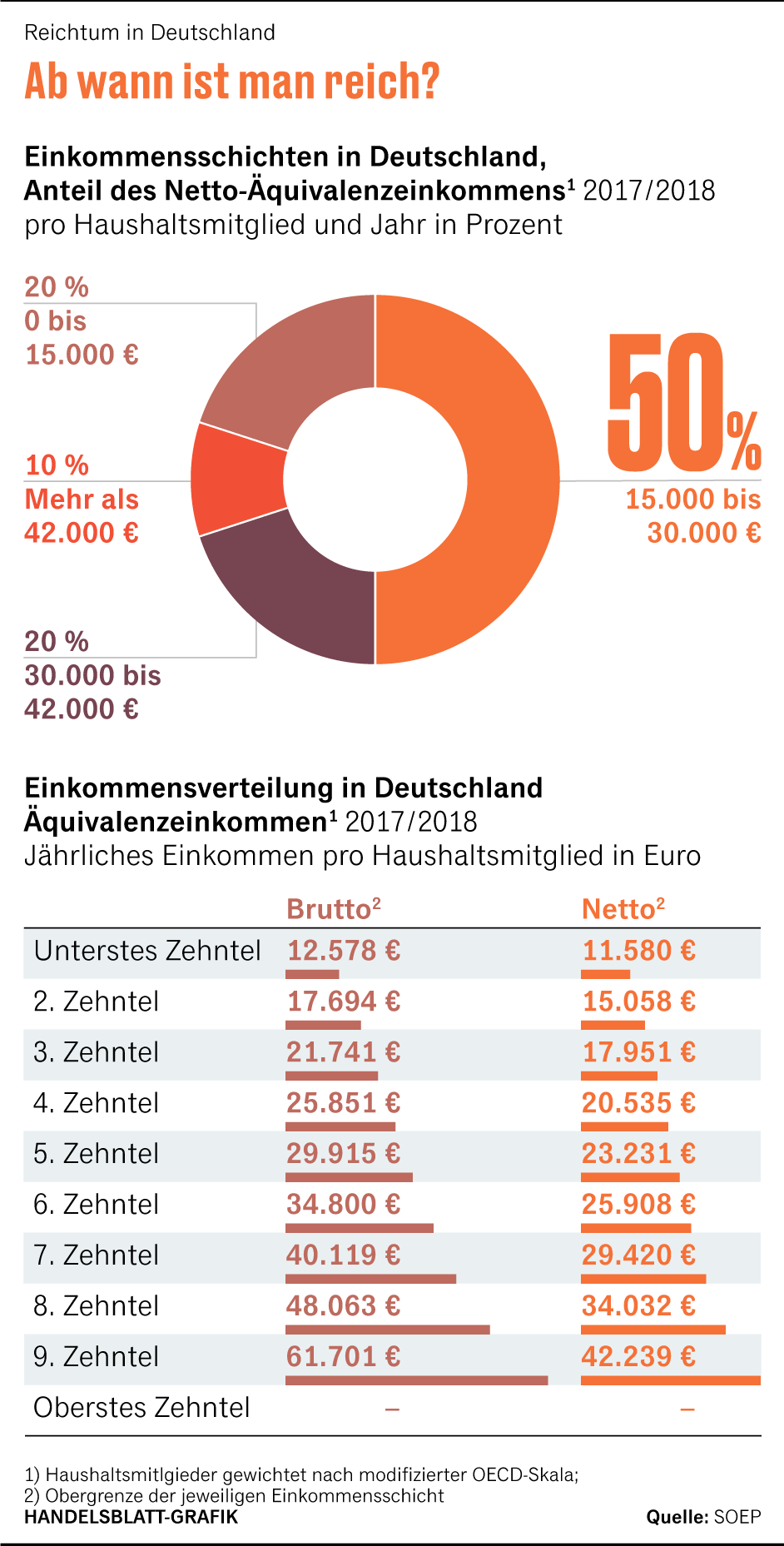 Bach draws the line to income wealth where the top hundredth of income begins. To belong to this group, you have to earn at least 160,000 euros gross per year. With this definition, too, Scholz was one of the rich in the country.

It is more difficult to belong to the wealthy if you take the tax on the rich as a benchmark, which as a single person with a taxable income of EUR 265,327 or more must pay an increased tax rate of 45 percent. That affects 163,000 taxpayers or around 0.2 percent of the population.

In the middle of the distribution is 22,500 euros gross per household member. The mentioned limits of the income brackets are based on the so-called equivalence-weighted household income per person, which is applied by the OECD. The total income is divided among all household members. 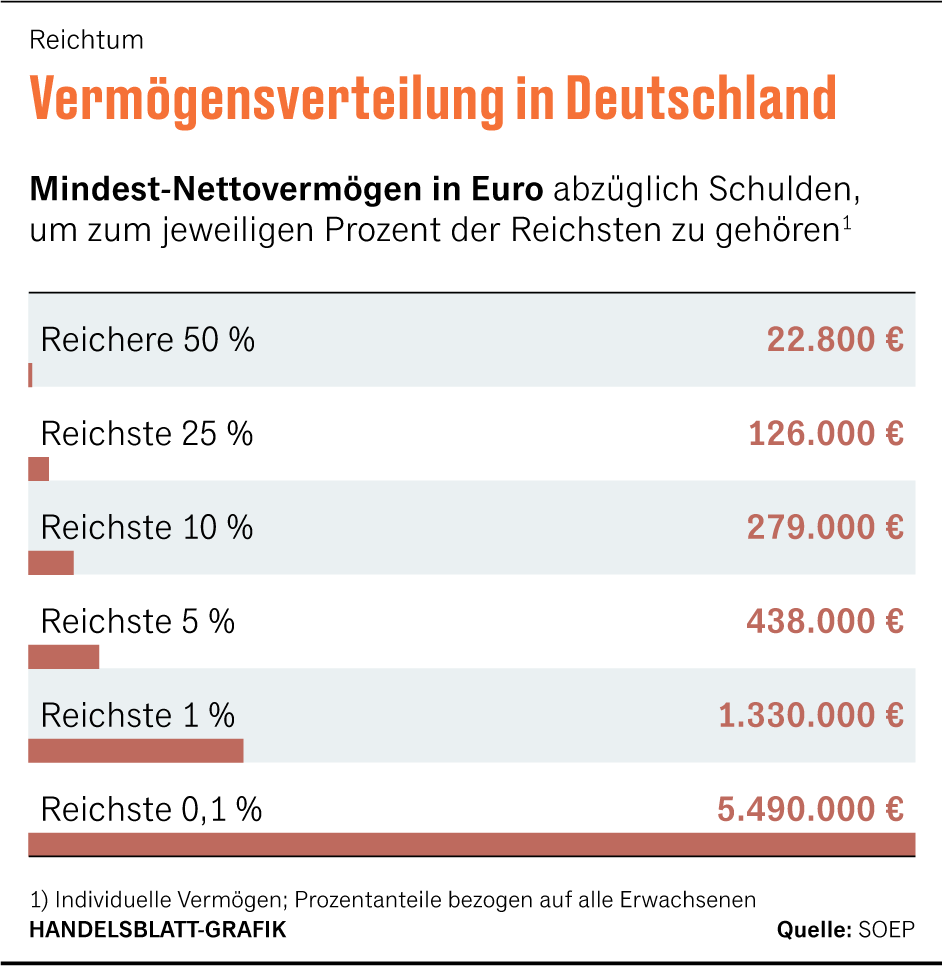 Already wealthy with a car

While incomes are concentrated in the middle range, so that one can speak of the fact that the vast majority of the population belongs to the income middle class, the situation is very different with wealth. Here a majority of the have-nots face a minority of people with large fortunes. In between there is a rather narrow, affluent middle class.

Real estate as an investment

The examples are not chosen at random. For the lower income brackets, the wheelchair is usually the most important asset. Above that, up to the point where wealth begins, wealth consists predominantly of the apartments and houses in which one lives. In addition, the better-off still have properties that are rented to a certain extent.

A lot is inherited

According to a study by DIW published at the beginning of February, up to 400 billion euros are bequeathed or given away in Germany each year. That would be about a quarter more than other studies have previously assumed. There is no precise data on this, among other things because there are high inheritance tax exemptions for relatives. “It is astonishing that in an economic system based on individual performance there is in fact no precise knowledge of the assets transferred without performance in Germany,” says study author Markus M. Grabka.

Study co-author Anita Tiefensee from the Hans Böckler Foundation, who commissioned the study, derives the demand from this: “These new figures should be an impetus to put the current regime of high tax exemptions in inheritance and gift tax to the test put."

Who Wants To Be A Millionaire?

The typical wealthy millionaire looks like most people will imagine him to be: a white elderly gentleman of (West) German descent, or in the words of the SOEP: “You are more often than the average male, have an above-average educational qualification, are older than the rest of the population Population and often have a below-average migration background. "

Not surprisingly, millionaires also have a net income of over 7600 euros (weighted household income), which is well above average, and they save above average. This is another reason why they can accumulate additional wealth more quickly than non-millionaires.

When millionaires work, they are usually self-employed, entrepreneurial or as managing directors or in a similar managerial position. Those who work work 47 hours per week, significantly more than the average.

In terms of their personality traits, millionaires differ from the poor in two main characteristics. A common classification in personality psychology is the five-factor model. According to the SOEP surveys, there is no difference in the three main dimensions of openness to experience, conscientiousness and extroversion (sociability). In neuroticism, millionaires have slightly higher scores.

But the only big difference in these five traits is that millionaires are significantly less tolerant people. At least that is what the SOEP surveys reveal. Consideration, willingness to cooperate and empathy are therefore on average not very pronounced among them.

The second big difference is in a property that is not shown separately under the “Big Five”. On average, millionaires are very risk takers. According to the SOEP survey, 40 percent of them had the three highest values ​​of eight to ten. The proportion of the rest of the population is less than half as high

Whether millionaires can simply better afford to take risks because they have reserves or whether they got rich because they took risks cannot be determined from the survey.

If you ask millionaires how they got rich, work and entrepreneurship are the main factors. Inheritance, gifts and luck, on the other hand, only play a subordinate role according to their self-perception.

More: “I wouldn't consider myself rich”: Scholz outraged with a swipe at Merz.