How does a VoIP business work

In the course of the phasing out of traditional telephone systems, which established their connections in the classic way via the copper cables of the fixed network, many new possibilities for telecommunications have emerged with VoIP. However, some potential users are still unsure about this technology and what differences an IP connection entails. The following is intended to help you.

What is Voice over IP?

Voice-over-IP refers to the transmission of voice data over the Internet instead of using traditional telephone networks (PSTN or ISDN). The Internet protocol used for this, abbreviated to IP (Internet Protocol), was originally designed only for the transmission of data packets in computer networks. However, since it quickly established itself as the standard, it was also adapted to the data packet-based transmission of voice information. It is now possible to communicate using a computer, tablet or smartphone with Internet access via VoIP.

VoIP simplifies telephony processes and enables new functions and services that are difficult or costly to implement in the conventional telephone network:

These and many other advantages of VoIP ensure a rapid growth in VoIP telephone systems in companies.

How do you make calls via VoIP?

How the VoIP is basically always the same - no matter which technology is used for it. Voice is converted into digital signals using analog-to-digital converters and then sent over the network in individual data packets. The following different variants therefore differ in the type of end device used as well as the device and time for the conversion of the digital data packets into IP packets.

You need the following for telephony with VoIP:

IP telephones, i.e. telephone devices that have the appropriate technology to make calls directly via Voice over IP - this also includes VoIP-enabled cell phones. Basically, these telephones require a network interface (Ethernet or WLAN) via which IP packets are sent and received.

Softphonesi.e. software that runs on a computer or smartphone and functions as a virtual phone. The voice input and output is usually made possible via connected loudspeakers / headphones and microphones, USB phones or headsets. The end device is connected to the network and takes over the "IP packaging".

The advantages of Voice-over-IP for your company

Below are some of the benefits of using VoIP technology for businesses. Find out here how much potential there is in combining a wide variety of services under the umbrella of Unified Communications in a common environment. 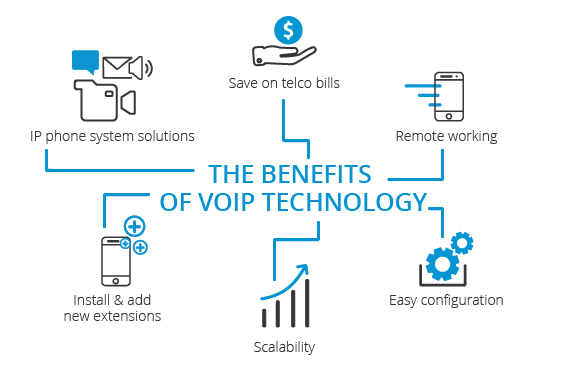 A software-based telephone system, which runs on-premise on a local server or is hosted externally, enables the full performance of the available hardware, software and operating systems to be used. While conventional telephone systems often have complicated interfaces that can only be operated by manufacturer experts, an IP telephone system can be operated without any problems via an intuitive user interface. Anyone with basic IT knowledge can install and configure such a telephone system with little effort. Traditional self-contained systems, on the other hand, often require specially trained technicians. Last but not least, VoIP systems can be adapted even better to the telephony requirements and needs of your company by assigning specific rights for access, use and configuration to both user groups and individual users.

2. Use of the existing network infrastructure

When using a VoIP telephone system, you can connect telephone hardware directly to a standard network port. This can be shared with the nearest computer. Software telephones can be installed directly on the PC. No separate cabling is therefore required to set up the system. There is also no need for time-consuming maintenance of the telephone system. Thanks to the high flexibility and scalability, you can easily add new extensions. If there is no telephone system available yet, e.g. B. in the case of new business premises, it is possible to install a complete VoIP telephone system at the same time and inexpensively by setting up a computer network. Employees can flexibly and easily connect their own VoIP phone to any Ethernet port and can still be reached under their personal phone number (ideally supported by push technology). Last but not least, VoIP telephony offers all the benefits of roaming, as calls can be easily rerouted to anywhere in the world thanks to SIP (Session Initiation Protocol).

IP telephone systems are based on an open standard, the SIP protocol, which is used by all modern VoIP telephone systems and thus grants you manufacturer independence. This has the advantage that almost any type of SIP telephone or VoIP gateway can be used for VoIP communication. With conventional, proprietary telephone systems, on the other hand, optimized or new functions can often only be used by purchasing new expensive hardware or expansion modules. In addition, a proprietary telecommunications system can hardly keep pace with rapid growth: With the increasing number of telephone lines or extensions, it is not uncommon for the hardware to also have to be expanded - at the corresponding costs. Sometimes a completely new telephone system is even required. It is different with an IP telephone system: even with a normally equipped computer, a large number of telephone lines and extensions can be managed effortlessly. New phones are simply added as needed.

Since a VoIP telephone system is software-based, new functions can be more easily designed, added or optimized. Many VoIP systems are already delivered with a wide range of functions, including automatic answering machines (IVR), voice mail, call waiting and much more. m. If these performance features are required for proprietary systems, additional costs must often be taken into account. Conference calls are also a convenience that proprietary telephone systems offer little or only at great expense and expense. Integrated softphones, on the other hand, as software-based SIP telephones, offer all functions clearly and easily understandable via a familiar Windows user interface at no additional cost. Thanks to the seamless integration of telecommunications into the local network, developers can integrate telephony into data processing and thus also into numerous company applications. In this way, for example, inquiries can be answered more quickly for incoming calls, as the caller's customer account can be called up immediately when the caller ID is recognized. The required data is available more quickly, the customer is saved valuable waiting time and work processes can be made more cost-efficient. Outgoing calls are also made directly and quickly via directly integrated applications and databases.

5. Cost advantages and control over system status and calls

The status monitoring of proprietary systems is often only possible using expensive, manufacturer-specific system telephones. But even with this hardware, the status cannot always be clearly and clearly determined. VoIP telephone systems allow you to retain full control of your telephone system via the web interface and also enable you to specify which users should have access to these control functions. The connection data of incoming and outgoing calls are stored in a database on the server so that call costs and call volume can be analyzed in detail and saved as a report and shared. By using a VoIP provider (SIP trunk), organizations save considerable costs, especially for long-distance or international calls. In addition, a bridge can be used to establish a connection to other offices or branches in order to enable free internal calls.

Basically, the introduction of VoIP does not have to change the entire usage behavior. Telecommunications technology is characterized by a high degree of downward compatibility. Fax machines, for example, can still be connected to the telephone system via a VoIP gateway. But an IP telephone system offers more flexibility, more scalability, more functions and above all: lower telephone costs.