Virunga National Park and its Guardians: A Green Vision for the Congo 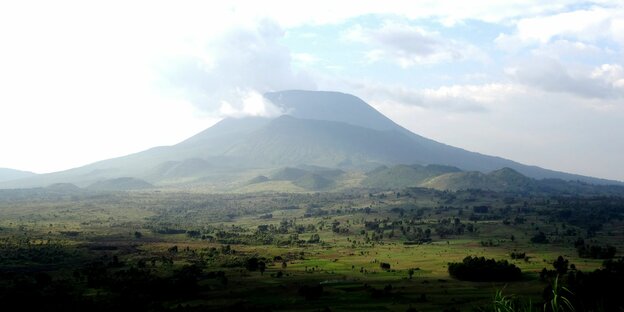 The still active volcanoes Nyiragongo and Nyamuragira, here with a view over the Virunga National Park Photo: Simone Schlindwein

VIRUNGA PARKtaz | New barbed wire, a man-high wall made of lava stone, blue and white wooden posts, next to it a sign: “Border of the Virunga National Park”. Beyond this wall, the forest becomes thicker, more pristine. The air is cool, hardly a ray of light penetrates through the treetops. The unpaved runway leads in serpentine lines through the undergrowth. Suddenly a road turns.

The headquarters of the park administration looks like a spaceship in the middle of the jungle: a building with well-equipped offices, next to it modern construction machines, concrete mixers, excavators. This will be used to build hydropower plants on the nearby Rutshuru River. Safari jeeps are available for tourists. The luxury lodge with fireplace rooms and whirlpool bathtubs is waiting.

The Virunga National Park in the east of the Democratic Republic of the Congo is a Unesco World Heritage Site. It stretches from the shores of Lake Edward through the savannah up to the highest mountains in Africa, the Ruwenzori with its mysterious snow-capped peaks - endless biodiversity that needs to be protected, especially the endangered mountain gorillas. Up to 300 visitors come per month, the expensive tickets are sold out long in advance.

Many visitors are attracted because they saw the documentary “Virunga”: herds of elephants in dizzying camera positions, baby gorillas playing in close-up. The pictures are fascinating, the message shakes up: the park is in danger! Because under the Virunga there is oil. The British oil company Soco has installed towers for test drilling; work is currently suspended, but the search for oil is not off the table. Congo's government needs the oil - and the money.

In the struggle for conservation there is a new actor who already has money. In addition to Congo's nature conservation agency ICCN and the environmental protection organization WWF, the foundation of US billionaire Howard Graham Buffett can now be seen with its own logo on the entrance sign to the park.

The 60-year-old trained farmer, son of investor Warren Buffett and former director of Coca-Cola, feels called to preserve the Virunga. He also funded the documentary. "Marshall Plan for Eastern Congo" is what Buffett calls his "Virunga Alliance".

In a Skype conversation, Buffett tells the taz how he visited the Congo for the first time in 2009. There was war to see the gorillas, a long-awaited dream, but it didn't work out. But he got to know park director Emmanuel de Merode. Since then, both have had a deep friendship.

Coca-Cola for the rebels

When Buffett traveled to the Congo again in 2012, he was staying in the park's 5-star lodge. Again there is war, again he cannot visit the gorillas. The Tutsi rebels of the M23 (March 23rd Movement) have conquered the area. “We could hear the firefight from afar,” Buffett recalls. In the living room by the open fireplace, he and his friend de Merode devise the Marshall Plan. "I was sitting on the sofa with Emmanuel, he was depressed," says Buffett. It was about financing a hydropower plant. One investor had dropped out because of the war. "I remember leaning back and saying that we absolutely have to do this."

Since then, his foundation has invested around $ 150 million: in streets, coffee roasters, ecotourism projects, hydropower plants - Buffett can't even list them all. “I have no upper limit,” he says. "If I see a project that helps the park, we finance it." He visited the Virunga five times. In the meantime, the gorilla visit has also worked.

Buffett realized that the park can only be saved if there is peace and tourists come. But to do this, a solution had to be found for the rebels. The M23 headquarters was just a stone's throw from the parking station. The M23 officers often stopped by the lodge in the evenings to drink whiskey. The US entrepreneur invited M23 boss Sultani Makenga to dinner. One participant remembers: Instead of whiskey, a lot of Coca-Cola was drunk.

Better than the UN?

Buffett later funded the peace negotiations between the M23 and Congo government in Uganda. After that, the M23 was ousted from the Congo, and its former fighters are in exile in Uganda and Rwanda. Buffett now dreams of creating a demobilization program "so they can come home and find a job."

Actually, this is the task of the UN mission. Does Buffett want to replace them? “But yes,” he answers bluntly. “We are doing more here in a short time than the UN has achieved in the past 15 years.” That almost sounds like megalomania.

The Virunga is a powerful institution in Eastern Congo. Officially, he is subordinate to the Congo's nature conservation authority ICCN. But only 5 percent of the approximately $ 5 million annual budget comes from the state treasury. The rest are EU subsidies and tourism income, and income from electricity sales will soon be added. This will make Virunga Park, already the largest private employer in the province, the largest investor in Eastern Congo. It will then deliver more electricity than the state operators.

The park administration also employs almost 500 park rangers. With their machine guns and ammunition chains, they seem like a quasi army, better equipped and trained than the regular soldiers. They fight poachers in the jungle and savannah of the Virunga. Most of the rangers are locals, including former rebels. Today they are defending Virunga Park. A state within a state.

The forest clears a few kilometers beyond the parking station. Goats graze between wooden huts, women haul firewood. The Rutshuru district lies in the heart of the Virunga like an island in the midst of various shades of green. Around 1.5 million people live here, and the number is steadily increasing. The population is penetrating further and further into the park, the border between the maize fields and the jungle is fluid.

In the small town of the same name, Rutshuru, where the highways cross, everything seems peaceful at first glance: children stroll to school, women haul tomatoes to the market, trucks full of charcoal chug south to Goma, 80 kilometers away.

Two years ago the M23 rebels ruled Rutshuru. Since the end of 2013 it has been the Congo government. But the Rwandan Hutu rebels of the FDLR (Democratic Forces for the Liberation of Rwanda) and local Mai-Mai militias are making the area unsafe. They hide in the park, kidnap people, and attack the vans. “We live on an island of insecurity, and Virunga Park is to blame!” Says Innocent Gasigwa, head of the local umbrella organization for civil society.

The barbed wire and white sandbags of the UN camp can be seen from Gasigwa's desk. Until recently, 2,300 displaced people lived in tents. But Provincial Governor Julien Paluku sent her home: there is now peace. The UN chief in the Congo, the German Martin Kobler, landed in the UN camp by helicopter. Declared, “Rutshuru is now an island of stability!” And flew away again.

The "islands of stability" are Kobler's favorite concept. The idea: an area will be wrested from the control of rebels, the state will move in and secure the "island". Rutshuru was the first of its kind after the end of the M23. But the new district administration only has an annual budget of 700 dollars. The taz witnessed how auditors from the finance ministry came from the capital and the administrator ran away. The cash register has been empty since then.

There can be no question of stability. Nobody dares go out at night. When farmers come in for the harvest, pillaging militias lurk at the edge of the forest. Gasigwa shows the latest report he submitted to the UN mission: kidnappings, looting, rape, murders, vehicle robberies - the full range of violence, almost every day. “Unemployment is pushing young men into the militia,” says Gasigwa. Like it has been for 20 years.

In 2012 the British oil company opened an office in Rutshuru. The British roared down the street in luxurious SUVs, remembers Innocent Gasigwa. The residents stood in line, begging for jobs. Nobody was hired. Soco disappeared again. Instead, Virunga boss Emmanuel de Merode said that oil drilling was bad for the environment and that the park would create jobs. “The Virunga of all people?” Asks Gasigwa.

Park manager de Merode is aware of the problem. As the offspring and real prince of the Belgian royal family, he personifies the dark colonial past. He sits in a ranger's uniform in a hotel in Goma, an escort of armed bodyguards in the parking lot. He has to be careful: shortly before the Virunga film started, he was shot and barely survived. De Merode had taken on Soco and Congo's government - risky. His friend Buffett is also viewed with suspicion in the Congo: In Goma, his private jet no longer receives a landing permit, he enters via Rwanda. He is close to Rwanda's President Paul Kagame.

When the 45-year-old Belgian talks about his vision of the park, his light blue eyes shine. “We are aware that we are taking away a lot of fertile farmland from the world's poorest people. That's why we want to create jobs, ”he says. The key to new sources of income is electricity generation, which will attract investors. Such as the German soap manufacturer Savonor, based in Burundi, who is now building a factory in Rutshuru: soap made from Congolese palm oil as soon as the hydropower plant is up and running.

De Merode calculates that up to 1,000 jobs can be created per megawatt of electricity. The hydropower plants are expected to deliver 50 megawatts by the end of 2015. "That would be up to 50,000 jobs!"

But since when has peace in the Congo been a numbers game?