Why do Bangladeshis immigrate to India

Bangladesh is one of the poorest countries in the world. Around a third of the population lives below the poverty line. At the same time, Bangladesh is the world's largest exporter of clothing after China, generating around 80% of the country's export revenues. Over four million employees, including 3.2 million women, make a living from work in the clothing industry.

The extremely low labor costs in Bangladesh have led to spectacular growth in the industry over the past few decades. The wages are so low that a seamstress works up to 100 hours overtime a month in order to survive. In Bangladesh, it is extremely difficult to form unions in the factories and have them officially recognized. There are registered trade unions in almost 400 out of a total of approx. 5000 factories, and these are often people selected by factory management rather than legitimate representatives of the workers.

Bangladesh gained notoriety with one of the greatest industrial disasters that has ever occurred: on April 24, 2013, the Rana Plaza factory building collapsed, killing 1,134 seamstresses and injuring more than 1,800 people. Five textile factories produced in the building, many for large fashion companies, whose products also hang in our wardrobes.

The image damage for the fashion companies was so great that it seemed as if the industry was finally going to move: The Accord for Building and Fire Protection, which represented a milestone for the safety of women workers in Bangladesh, was signed, and in Germany as In response to the disaster, the Alliance for Sustainable Textiles was founded. But six years after the terrible catastrophe, repression and poverty wages continue to dominate the clothing industry in Bangladesh. When thousands of workers struck for a higher minimum wage in Bangladesh's Ashulia textile region in December 2016, factory owners and the government struck back relentlessly to intimidate workers and unions. 600 workers and trade unionists were charged, 1,600 were fired, and 26 were imprisoned. In early 2019, there were similar reprisals in strikes for higher wages.

Bangladesh has also overtaken India as the world's second largest knitwear exporter after China. Since wage costs in China have risen sharply in recent years, more and more companies are moving to countries with cheaper labor such as Bangladesh, Myanmar or Ethiopia. These low wage costs are at the expense of the workers, who make cheap clothing possible for Europe with wages below the subsistence level, violence and harassment at work and massive restrictions on other labor rights.

Employment in the clothing industry

Women over 30 years of age are considered too old to cope with the tremendous work pressure. Most of the young workers come from rural areas. Due to a low level of education and the lack of jobs in rural areas, they are forced to move to the cities to earn money there. Despite mostly poor labor and social standards, the clothing industry is often the only way women can earn an income. With their income, the young women support their parents in the countryside and are often the sole breadwinners of their children and husbands, who are often unemployed. Social insurance is often only on paper, and medical expenses are rarely covered. Fatigue-related illnesses are common. 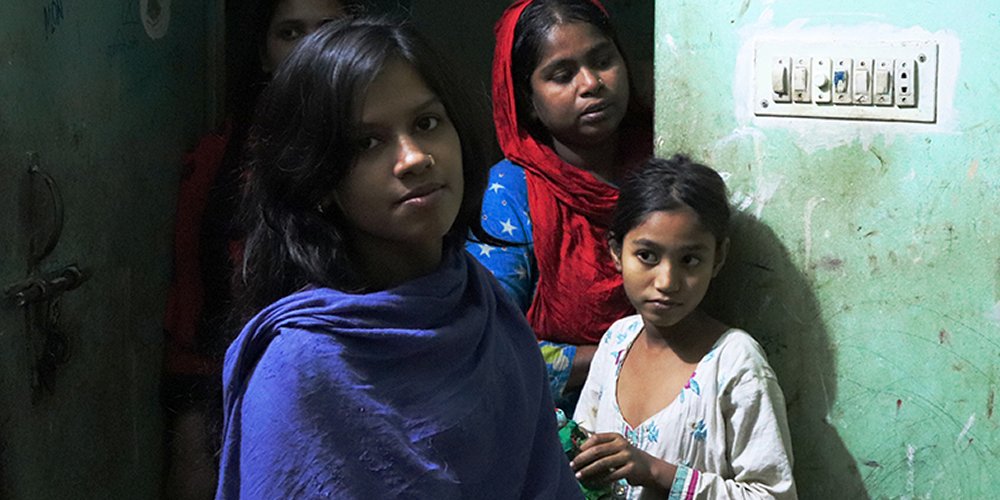 While working in a factory is also associated with a loss of face for women, as they are exposed to the eyes of men, they gain from their income, which is often not just an "additional income", but the main source of income for the family, too a certain economic independence, which in turn strengthens their reputation and self-confidence. However, it is often not just the looks of the supervisors: Many workers are sexually harassed, humiliated and verbally abused.

If the workers want to organize themselves in a union, they are often fired, put under pressure and even physically attacked. That is why only a small part of the seamstresses are unionized. The fear of losing one's job is too great and there is hardly any time for union work that has to be done after work if you work late into the night. Nevertheless, the unions are very active, organizing sit-ins and strikes. However, they are also split up into many groups, which weakens their clout. Trade unionists and labor lawyers are harassed, imprisoned and also risk their lives. Time and again, clashes between the police and striking textile workers kill people, and activists are tortured or kidnapped.

The legal situation in Bangladesh is not even bad: the Bangladeshi legal system contains a large number of protective measures. The country has ratified seven of the eight ILO core labor standards, as well as the three most important international human rights treaties with reference to labor law. Since the enactment of the national labor law in 2006, worker protection has improved slightly. For example, the Labor Code fully covers the areas of harassment and discrimination, child labor, membership in trade unions, vacation regulations and safety at work. At the same time, it still contains weaknesses with regard to minimum age and low wages. The main problem lies in the lack of enforcement of the law by the authorities and the lack of effective legal protection for those affected. A lack of controls, poorly developed rule of law structures, understaffed and underfunded courts, corruption and nepotism are widespread.