How can dunes be slowed down effectively 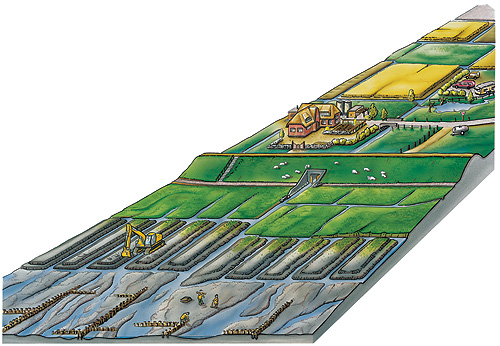 On earth, the natural attack of the seas is advancing along many coasts. This decline in coastline often threatens valuable facilities such as ports, fishing settlements, seaside resorts, beach hotels and lighthouses, which should be saved from destruction by the sea. That is why people have been striving for coastal protection for a long time. Coastal protection is understood to mean all measures to protect the coast, either directly or indirectly, from erosion. But the landside areas should also be protected from the surf and the occasional storm surges. So there are two forms of coastal protection facing each other. On the one hand, steep cliff coasts should be prevented from breaking off, and on the other hand, flood protection determines the construction work on flat coasts.

The steep bank sections (such as on the German Baltic Sea coast) do not need to be protected from flooding, as the hinterland is located high enough anyway. Often, however, action must be taken to counteract the dislocation of the cliff. Cliffs can only be effectively protected with modern technology. The effect of the surf is weakened with wave-breaking groynes (inclined or vertical rows of piles), piers, stone packings and concrete walls.

On the shallow coastal sections of the Baltic and North Sea, there were often natural coastal dunes made of sand, but they were often destroyed or rebuilt by humans. In contrast to cliffs, the populated hinterland has to be protected from devastating storm surges and constant sand washouts. For this purpose, a combination of several structural protective measures is usually taken. Storm surge protection dunes are natural or coastal-technically modified bodies of sand with a certain crown height and minimum width. In the event of a storm surge, this substrate body should slow down the water masses and prevent them from penetrating inland. Since the dunes are not paved, they are z. Some of them are removed and then have to be artificially reconstructed. Therefore, the protective dunes must in principle have an enormous thickness. Often, however, this is not the case and additional dyke structures are necessary to provide effective flood protection. Some of the dykes are offset so far inland that the foreland strip is sufficient to neutralize the surf energy. An important prerequisite for dykes is a minimum height of the dam crest, which must not be lower than the flood levels reached in the past. Furthermore, attention must be paid to possible subsidence of the subsoil and the method of fastening the dyke structure must be adapted to the wave behavior.
On some parts of the coast, such as B. on the island of Sylt, there is a negative sediment balance. This means that there is a lack of sand due to the constant surf erosion and unprotected coastal areas and islands threaten to be "swallowed" by the sea. The regression of the shoreline should be prevented or dampened by repeated flushing of sand. The principle is quite simple: on another stretch of coast, sand is removed with dredgers and the water is filtered out, with the sand settling in the ship's belly. On the affected coastline, a sand-water mixture is produced again with pumps and directed onto the affected bank with pipes. The water runs back into the sea and the sand is also technically solidified. However, this procedure has to be repeated every few years, which makes the method extremely expensive. Sand flushing can therefore only be carried out on selected sections of the coast. In other places, the natural loss of coastline simply has to be accepted. The other measures, too, are always in a tense relationship between ecology and economy. Every human intervention by coastal protection leaves its mark on the sensitive ecosystem of the coasts. In addition, there must always be a balance between the costs and the benefits of the measures. The focus is on protecting people.

Land reclamation measures, which are often referred to as reclamation, also serve to protect the coast. The soil is raised or diked through embankments and drainage on a coast (sea or inland lake) in order to keep it free from flooding. Natural silting processes on the coasts are used and technically accelerated. Land reclamation technology has been developing on the German North Sea coast for centuries. Humans make use of the natural silt deposits in the tidal area. A system of groynes calms the sea water and delays the flow at low tide. This allows fine suspended particles and sand to be deposited on the sea floor. The sea floor is rising and trenches are being dug year after year. The excavated silt increases the beds on which the (planted) samphire will grow after a few years. This solidifies the soil with its roots and holds back further silt. When the newly reclaimed land is high enough, a dike is built in front of it. The new land that was diked in before the floods is also known as Kooge. Once the new land was mainly used for agriculture, while the primary goal today is coastal protection. The reclamation of new land is controversial because it destroys the ecologically valuable Wadden Sea and the salt marshes.
Artificial embankments are made on coasts that are unsuitable for natural land growth due to their relief. Since the middle of the 20th century, this has been done on a larger scale in order to artificially enlarge the very cramped settlement area of ​​some cities. In Japan, for example, coastal sections of the major port cities Tokyo, Nagoya, Osaka and Kobe are artificially drained due to a lack of space. Similarly, the urban area in Hong Kong was expanded for a new airport. In Europe, such land reclamation measures are being carried out in the miniature state of Monaco.

RATHJENS, C. (1979): The formation of the earth's surface under the influence of humans.- Stuttgart.
BOEDEKER D. & H. V. NORDHEIM (eds.) (1997): Nature conservation and coastal protection on the German Baltic Sea coast. Series of publications for landscape management and nature conservation.