How do I notice a real estate bubble

According to an economics professor, these are the 6 signs of a real estate bubble

Anyone looking for a new home has to dig deeper and deeper into their pockets. It starts with the building land and applies to both rents and purchase prices. The price increases are particularly rapid in Germany's metropolises: According to data from the real estate consultancy JLL, rents in Berlin, for example, have increased by 80 percent since 2004.

The warnings of a bubble forming on the German real estate market are getting louder - but most experts still seem relaxed. However, a real estate bubble per se is not to be equated with a crash. "A bubble is forming, but we are still very far from the beginning - so there is still the possibility of slowly deflating this bubble," says Hamburg economics professor Karl-Werner Hansmann in an interview with Business Insider. He comes to the result because he investigated the two property crashes in the USA and Spain (both 2007). According to this, a bubble extends over four to seven years. "In Germany, the bubble lasts about two years at the moment," says Hansmann. Even if the banks officially see no danger in the real estate market - behind closed doors the situation is different, explains the expert. "Representatives of large German banks tell me that they are very aware of dangers and are trying to counteract them." In his analysis of the property crashes in Spain and the USA, Hansmann identified six criteria by which a property bubble can be identified. We will introduce them to you on the following pages.

The most important criterion for Hansmann: Do real estate prices for residential buildings move similar to rents over a certain period of time? This is important if the construction or purchase of a house is used as an investment. The rent is the return for the buyer. “In normal times, both time series should run similarly and only show random deviations. However, if prices rise significantly faster than rents, the return falls accordingly, and only the speculative motive is responsible for the rise in prices, ”explains the expert. As with stocks, this would lead to a self-reinforcing inflation. Because: Those who want to buy a house are afraid that prices will rise even more and buy sooner rather than later - this means that demand remains high and prices continue to rise. True to the stock market rule: the bull market feeds the bull market.

Exponential, i.e. steady growth is healthy - for example five percent per year. A sign of a real estate bubble, on the other hand, is exponential growth: In other words, when prices rise more every year. One year five percent, the next six percent, then seven percent, etc. "In Germany we are already observing such hyper-exponential growth in Berlin, Hamburg, Munich and Cologne," says the economics professor. In other cities, however, the price increase is not yet that dangerous.

The prices in the top locations in particular rise first - that's the same for every bubble. The development afterwards is interesting to watch: The growth continues in waves with a time lag to the surrounding areas of the metropolises, only to then reach the rural regions. “In Hamburg's suburb, for example, which belongs to Schleswig-Holstein, we have long since been able to determine corresponding price increases. When the surrounding area is reached, a further step in the formation of bubbles has been reached, "says Hansmann. This development was particularly evident in Spain:" First there were massive price increases in Madrid and Barcelona - then came the Mediterranean beaches. The prices in other cities were still low at the time - the weaker locations were only affected after three to four years. " 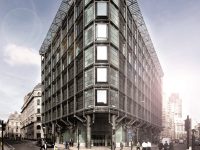 The global real estate market remains attractive. grundbesitz global invests in commercial real estate in the office, logistics and retail sectors around the world. Why this is interesting for private investors.

If mortgage rates are below three percent, that also indicates a bubble is forming. “It encourages a lot of people to buy or build. They say to themselves, we can currently still afford it, let's do it now, before interest rates rise, ”explains Hansmann. At the long end, interest rates have already risen again: from one percent to 1.8 percent. "With a higher mortgage rate, the banks can slow down the formation of bubbles."

Many banks still lure customers with the offer of only having to repay two percent of the total loan amount per year - that is not enough. "The loan interest rates are fixed for a long time, but when this time is over and the higher interest rates apply to the remaining amount, it can happen that many buyers can no longer afford their installment," warns Hansmann. He therefore advises that the banks should require four to five percent repayment of the sum per year. "In practice, however, customers then say that they are going to another bank - so the competition among banks also creates a risk."

Customers who want to build a house can still realize the dream of their own four walls with a high proportion of outside capital. "I am of the opinion that a maximum of two-thirds of the total loan amount should be financed by outside capital - that is, the customer would have to cover one-third with equity," says Hansmann. There is even already a draft law according to which the Federal Financial Supervisory Authority (BaFin) can prescribe a certain percentage of outside capital for which it is allowed to grant a maximum of one loan. "That would be a step in the right direction."

This is how the real estate bubble can be deflated

Yes, bladder, but still in the early stages - this is Hansmann's conclusion. He thinks that a crash can still be prevented. "Because banks have a certain say in mortgage interest rates, repayment installments and the share of borrowed capital, the real estate bubble can be gently vented again." Should a real estate crash in Germany nonetheless, the expert expects prices to drop by around 50 percent. "But we still have enough time that it doesn't turn out too bad."