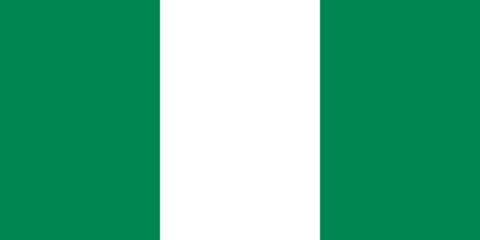 Nigeria is on the west coast of Africa. Its neighboring countries are Cameroon, Chad, Niger and Benin. To the west lies the Gulf of Guinea, which is part of the Atlantic Ocean. The Niger is the country's main river. A grassy landscape without trees is predominant in northern Nigeria. The dry season there is from November to March. The months from April to October belong to the rainy season. Tropical rainforests and swamps are typical for the south. The climate there is hot, humid and rainy.

Since 1991 Abuja has been the capital of Nigeria with around 2.5 million inhabitants. It is in the middle of the country. Previously, the coastal city of Lagos was the capital. With over 18 million inhabitants, it is the economic and cultural center of Nigeria. Nigeria has been a presidential democracy since 1999. Previously, the country went through difficult times with military governments and civil wars. Even now there are always tensions between the many different peoples and between Christians and Muslims.

Islamists from the north of the country are terrorizing the people with great brutality. They want to introduce Sharia law, Islamic law with very severe punishments, nationwide. As a result, many families live in fear and terror. They see no future in their homeland for themselves and their children. Many are fleeing to other countries and hope to be able to lead a safe life there. The consolidation of democracy, respect for human rights and the fight against crime and corruption are among the country's most important political tasks.

Before the colonial era, Nigeria was made up of several kingdoms. When the first Europeans arrived in the country in the 15th century, they set up bases and started a profitable slave trade. Allegedly, the Europeans bought today's capital Lagos from a chief. In the 19th century, the British increasingly took control of what is now Nigeria, eventually making the country a British colony in 1861. It was not until 1914 that the British colonial power established the Nigerian border. The country has been independent since 1960.

Nigeria is the most populous country in Africa and very densely populated by African standards. Around 400 different ethnic groups live there, and many different cultures and traditions converge here. The majority of Nigerians are Muslims or Christians, but there are also many followers of African religions.

Most people live in very great poverty and earn some money from farming. But often the earnings are not enough for enough food or medication. Many Nigerians also have no way of drinking clean water. Because education has been neglected for many years, schools are in very poor shape. Despite compulsory schooling, only about every second child goes to school. Many children have to work to improve their parents' income. Wealthy Nigerian parents send their daughters and sons to school abroad.

Nigeria makes a lot of money exporting crude oil. The politicians use this opportunity to build up the economy and the country. As a result, the dependence on the rich gas and oil deposits is also very high. In addition, oil production not only creates wealth, but also creates severe pollution. In the Niger Delta, water, air and food are contaminated as a result. Other important industries are the cultivation of cassava and beans. Money is also made with the production of cocoa.