Can Nigeria be a democracy

"Congratulations, Nigeria!" One would like to say. Not because it has now made a particularly lucky choice with Muhammadu Buhari, but because there is a change of power in the country for the first time since the return to democracy. Until recently, not only had most Nigerians believed that the overpowering ruling party PDP could decide every election for itself anyway - be it through the real support of the electorate, be it through intimidation and manipulation. The last Nigerian presidential elections were therefore about as exciting as the question of who will become German football champions. If the change of power is still going reasonably peacefully, then one can say that democracy in Nigeria has made a huge step forward.

Why was everything different this time? It started with the main opposition parties coming together in an alliance. And then this alliance was also able to agree on a common candidate in an unusually transparent and democratic process. For the first time, Buhari was able to attract large numbers of voters to his side beyond his core electorate - the Muslims in the north of the country. This is especially true for the populous southwest of the country with the economic metropolis of Lagos.

Great respect goes to the elected President Goodluck Jonathan, who quickly and clearly accepted his defeat. This cannot be taken for granted in Nigeria or in Africa as a whole. Hats off! Jonathan himself was one of Buhari's most important election workers. He never got into contact with the people in the north of the country. The clearest evidence of this is his lack of interest in the terror of Boko Haram. He only seriously devoted himself to the fight against terrorism when it threatened his electoral victory, which he believed to be certain. With his years of failure on the terror issue, he drove many Christians into the arms of Buhari. Many of the villages conquered by the terror sect are inhabited by Christians. Most of the girls kidnapped in Chibok a year ago are Christians. 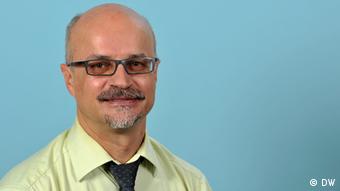 Many Christians in the north-east of the country and in the central regions, where Muslim and Christian settlement areas meet, found that this Christian president cannot or does not want to offer them protection in emergency situations. Buhari was able to win just a third of the votes four years ago in the state of Plateau, which has been repeatedly shaken by religious and ethnic disputes. Now Jonathan only got around 55 percent there.

The greatest praise goes to the chairman of the national electoral commission, Attahiru Jega. The politics professor had to endure immense pressure in the past few weeks. First, the government, with the help of the military, forced him to postpone the elections for six weeks. Then almost every day politicians from President Jonathan's circle came out in public and demanded that Jegas be removed from office. They either accused him of making common cause with the opposition or of wanting to use technology that was not fully developed. As in 2011, Jega kept calm. Contrary to numerous critical voices, the election was organized almost everywhere. Hardly any serious observer expressed fundamental criticism.

The state of Rivers in the Niger Delta shows how difficult the task of the election commission was. Jonathan's PDP is said to have received almost 1.5 million votes there - but Buhari's APC only received 70,000. The governor there defected to the APC months ago and became its campaign manager. Buhari himself was able to celebrate his election campaign successfully in River's capital Port Harcourt. No wonder that the regional head of the election commission stuttered badly on Sunday when he presented this unbelievable result in Abuja. Here, the courts are likely to have a lot of work to do.

Buhari now faces a difficult legacy. The economy, which is mainly dependent on oil, and the state budget, which is based almost exclusively on oil revenues, are facing difficult times due to the low oil price. The terror of Boko Haram is far from defeated. Buhari, who himself comes from the north, should find it easier to recognize the needs of the region than his predecessor Jonathan. Hopefully the ex-general Buhari also understands that a military victory is not enough, but that the north-east of the country finally needs a development perspective.

The Niger Delta is likely to cause him greater problems after Jonathan's defeat. The militants there were merely immobilized and were allowed to help themselves diligently under Jonathan's eyes. They will certainly try to defend their benefice. Curbing the corruption, which has grown endlessly under Jonathan, should still be one of the simpler tasks for Buhari. It can only get better. Overall, the ex-general will have to prove that he is actually democratically purified. Even his highly respected predecessor, Olusegun Obasanjo, repeatedly lapsed into military and authoritarian behavior after his election in 1999, with human rights all too often falling behind.