Is it worth studying in Oxford

Anyone who studies at Oxford is at home in the world. The students and lecturers come from 130 different nations and the profile of the university is characterized by a high international standard.

The universities of Oxford do not have a central structure, but rather academic umbrella organizations, which are composed of 39 individual autonomous colleges. The university is responsible for holding lectures, seminars and exams. The students live and learn in the individual colleges. Modeled after the monastery model, each college has a chapel, a dining room and bedrooms for the students. Each college also has its own statutes, which can only be changed with the consent of the Queen.

Besides Cambridge, Oxford is known far beyond the country's borders as an elite forge: the managers, top lawyers, state officials, writers and politicians of tomorrow are trained here. The list of famous graduates is long: a total of 30 British Prime Ministers graduated from Oxford or Cambridge, among them Margaret Thatcher and Toni Blair. The universities have also produced many famous writers such as Lewis Caroll ("Alice in Wonderland"), Aldous Huxley ("Brave new world") and William Golding ("Lord of the flies"), as well as over 100 Nobel Prize winners.

Of course, not all students become presidents of state, best-selling authors, or world-class scientists. But you don't have to worry about your professional future. A well-organized network of alumni who now hold top positions in politics and business, the so-called old-boys-network, helps graduates from their own university to start their careers.

Education not just for the rich 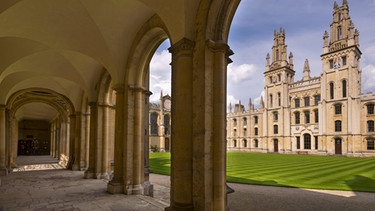 Studying at Oxford is in principle not a privilege for the rich, because the tuition fees of around 6,000 euros per year are covered, if necessary, by the municipalities, the state and through scholarships. On average, however, only 40 out of 100 applicants get a study place. Not only very good grades are decisive. In the dreaded application interview, each candidate must also be personally convincing and demonstrate independent thinking. Foreign exchange students who only want to study at one of the two universities for one year are spared the interview. Instead, they must submit letters of recommendation from professors at their home university. Since the level of instruction is very high, a very good knowledge of English is also a prerequisite.

From now on, those who are accepted have to bow to the strict rules of the universities. For example, students are not allowed to work or drive a car. Entering the college lawn is also strictly forbidden. This right is reserved for professors and their companions. 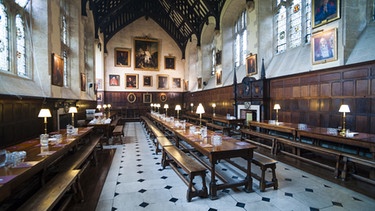 Old traditions are still very much alive at the two universities. This also includes wearing the gown. Its color gives information about the title of its wearer. The student needs the gown right from the start. The first time he has to put it on at the solemn matriculation. He then wears it to exams, awarding certificates and to the formal dinners, the so-called "Formal Halls", which every college organizes at regular intervals. Dinner is by candlelight at long wooden tables. From the walls, pictures of deserving college graduates from days gone by look at today's young colleagues. The professors sit at the high table. In the colleges, students and professors live in a family community. The common meal is therefore at least as important to them as the leisure activities.

From cooking to debating

It is not easy to decide on a leisure activity, because in addition to studying there are over 250 activities at each university. The selection ranges from theater groups and golf courses to the "foot-and-wine-tasting-society", a club whose members meet regularly to cook together and to test various fine wines.

The most famous student club is the Debating Club, founded in 1823, a forum for intellectual debate organized by the Oxford Union. 80% of the Oxford students are members here. A look at the pictures on the walls of the entrance hall shows that this is no ordinary student club. Everyone of rank and name is invited to an exchange of blows with the students - from the Queen to Mick Jagger and politicians from all over the world. Here the students can gain rhetorical experience and learn to measure themselves against the great. Many politicians used the Oxford Union as a springboard for their political careers. There is controversial debate about all conceivable topics, e.g. smoking bans in college bars. After both parties have had their say, a vote will take place. However, it is not about the matter itself, but about self-expression, because entertaining speakers are more successful than deep thinkers.

In order to balance leisure activities and learning, students need to be very disciplined. Every student knows it, the "essay crisis". This is the name of the night before the due date of an essay. In college, each student is assigned a personal supervisor, their tutor. For this, the student has to write one or two essays every week. These essays are then discussed in private. In this way, the tutor controls the learning progress of his protégé and prepares him for the exams. The advantage of this system is that the students usually do very well in the exams, as their performance is constantly measured and the tutor notices very early if they deteriorate. In such a case, the tutor tries to find out the reasons for this - be they academic or personal - and to counteract them at an early stage. This can go as far as not allowing his student to go on vacation during the trimester break.

Cambridge is only contemptuously called “the other place” by the students at Oxford, because the relationship between England's two oldest and most prestigious universities is characterized by a centuries-old rivalry for top academic and sporting positions. The two universities have been competing against each other in the annual boat race for 175 years. It's about honor and prestige.