For the authors of the study, it is not good and bad nutrients that determine mortality. The DGE, on the other hand, relies on the quality of fats and carbohydrates. / Yulia Furman, adobe.stock.com

Hamilton / Barcelona - Those who eat 35 percent of fat have a lower risk of death than those who consume less fat. On the other hand, the risk of dying increases - but not the risk of cardiovascular disease - if you consume more than 60 percent of your food in the form of carbohydrates. The researchers from the Population Health Research Institute (PHRI) of McMaster University and Hamilton Health Sciences in Canada present the im Lancet (2017; doi: 10.1016 / S0140-6736 (17) 32252-3) published results last week at the Congress of the European Society of Cardiology in Barcelona. The German Nutrition Society (DGE) explains why the reference groups chosen by the researchers distort the picture and updates their dietary rules.

The results of the observational study appear almost at the same time as the DGE is updated. In the revised 10 rules, the warning of an increased risk of obesity due to fat or cardiovascular diseases due to saturated fatty acids has been deleted. The DGE has also decided to delete the recommendation for 60 to 80 grams of fat per day without replacement. In addition, the specialist society no longer warns of “invisible” fats in dairy products.

"After a discussion process in which compromises were obviously struggled for a long time, the DGE has now taken an important step in the right direction and 'disposed of' a number of outdated recommendations," says Johannes Scholl, specialist in internal medicine and chairman of the German Academy for Preventive Medicine e. V., Rüdesheim. He criticized the recommendations in the spring of this year and asked for an update. 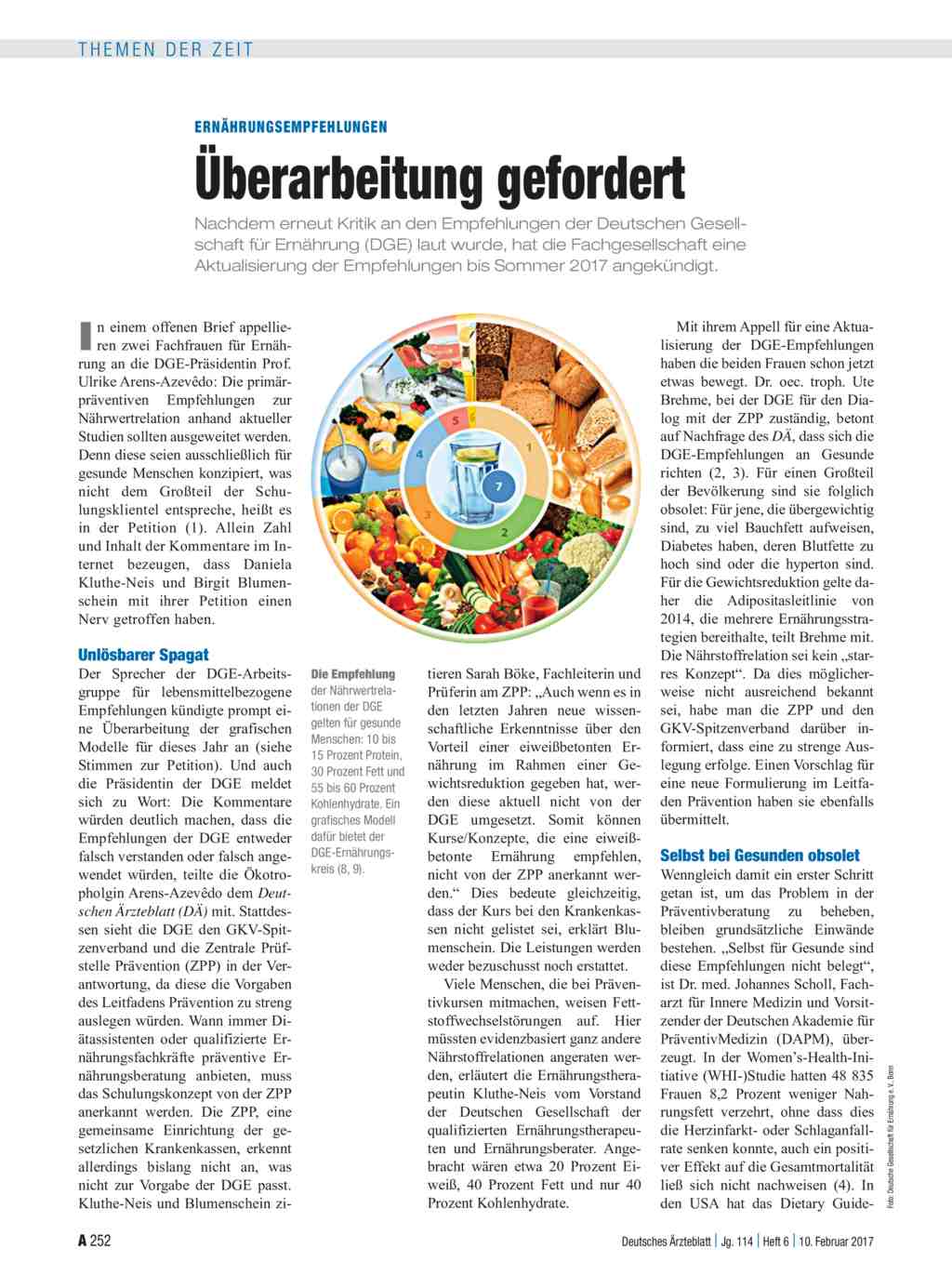 After criticism of the recommendations of the German Nutrition Society (DGE) was voiced again, the specialist society has announced that the recommendations will be updated by summer 2017. In an open letter, two nutrition experts appeal to DGE President Prof. Ulrike Arens-Azevêdo: The primary preventive recommendations on the nutritional relationship should be based on current studies

At the same time, the reference values ​​in the DGE nutrition group have not changed: It recommends a diet with a moderate fat content of 30 percent (with an increased energy requirement of PAL> 1.7 up to 35 percent) and a carbohydrate content of more than 50 percent. That corresponds to the Lancet-The recommendations derived from the study will be communicated by the specialist society upon request. However, the DGE also emphasizes that the percentage distribution is not the focus: "Our western diet is more about improving the quality of fat and carbohydrates."

Fruits and Vegetables: More than 500 grams per day has little benefit

With these changes, the DGE is responding well to the criticism expressed in spring 2017. The current results of the Prospective Urban Rural Epidemiology (PURE) study also show that the changes are going in the right direction. As part of the study, researchers working with Mahshid Dehghan evaluated the eating habits of more than 135,000 people from five continents over an average of 7.5 years. Those who ate three to four servings of fruit, vegetables, or legumes per day had the lowest mortality risk. That corresponds to 375 to 500 grams. Larger amounts had only a minor additional health benefit.

People who eat around 35 percent fat - whether saturated or unsaturated, have a 23 percent lower risk of mortality than those who only eat 11 percent fat. Mahshid Dehghan

In addition, the researchers report a lower mortality rate in people who ate more fat than is currently recommended by the DGE with 30 percent. People who eat around 35 percent of fat - regardless of whether they are saturated or unsaturated, have a 23 percent lower risk of mortality than those who only consume 11 percent fat, "explains first author Mahshid Dehghan when asked by the German Medical Journal the results. The main causes of death are cancer, infections and respiratory diseases.

For the DGE experts, it is difficult to understand why the lowest intake group was selected as the reference group in the PURE study. “This is, for example, the group with a median fat intake of only 10.6 energy percent. This group obviously has an increased risk of illness and mortality (for other reasons), "reports the DGE. If, on the other hand, the 2nd or 3rd quintile is used as a reference group, the results of the PURE study showed that with a diet, which comes close to the reference values ​​of the DGE (ie 30–35 En% from fat), no increased risk of mortality and cardiovascular morbidity can be recognized.

“Only with a diet with an extremely low fat intake (<10 En%) or with an extremely high carbohydrate intake (> 70 En%) is there an increase in the risk. These are feed areas that are unrealistic in western countries and are therefore not recommended by the DGE. "

The study authors go even further. It would make no difference whether the fat is saturated or (poly) unsaturated fatty acids. Of all things, saturated fatty acids are said to be associated with a lower risk of stroke. According to first author Mahshid Dehghan, earlier cohort studies from Japan came to this conclusion.

Carbohydrates: According to the DGE, poor quality caused the high mortality

The DGE is hardly surprised that a high carbohydrate content of more than 60 percent was associated with higher mortality: "As the data in the supplement show, the high intake of carbohydrates in the PURE study was primarily in the form of processed carbohydrates, such as white bread, white rice and added sugar. ”Earlier studies have shown that reducing the intake of simple sugars and refined starches by increasing the intake of unsaturated fats in particular has a health-promoting effect. However, the quality of the carbohydrates and the intake of dietary fiber were not taken into account in the present publication.

Dehghan believes that there are no good or bad nutrients. Rather, the results of the study would show that the relationship between nutrients and diseases is far more complex than previously assumed. "The risk could depend solely on the amount consumed," says Dehghan. How many calories the individual comparison groups consumed in total was not recorded in the study. Dehghan assumes that the groups consumed a comparable amount of calories. © gie / aerzteblatt.de