Which countries are safe for women

Where in the world are you treated as a girl on an equal footing?
And where do you as a girl confront the most challenges and injustices?

This is the question asked by two children's rights organizations that work for the rights of girls around the world.

"Save the Children" and "World Vision" each carried out a study on these questions and tried to find out how countries in the world fare in their respective governments in terms of educational opportunities, violence against women, child marriage, the number of pregnant teenagers and the quota of women.

Here is the result:

In both studies, European and North American countries made it to the top of the rankings. In summary, the absolute top countries for girls' rights include:

Source: Screenshot Report Save the Children 'Every Last Girl'

Germany just made it to 12th place in the study by Save the Children. The USA do even worse and are behind Algeria and Kazakhstan in 32nd place.Germany's 'bad' ranking is due to the low proportion of women in the federal and state parliaments, a high rate of pregnant adolescents and a relatively high rate of girls, who do not have a school leaving certificate, so the statement of the organizations.

The worst / most dangerous countries

Many of the countries with the worst conditions for a girl to live are unfortunately still in Africa: 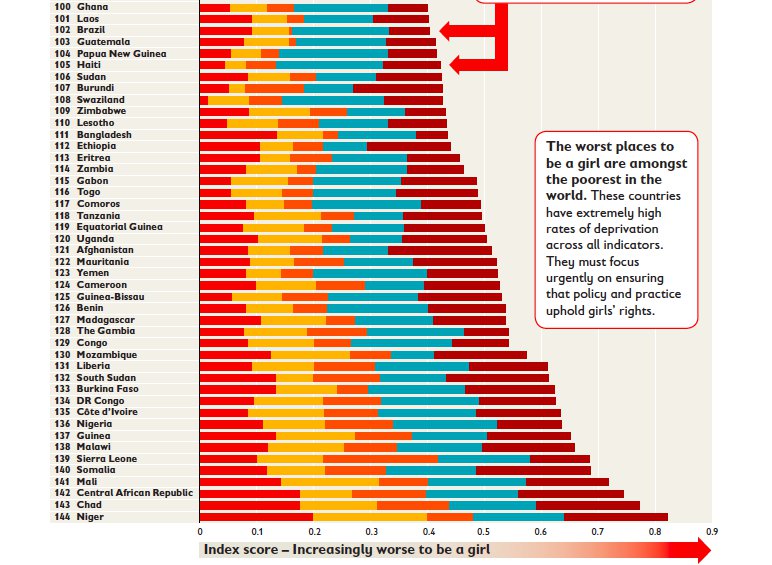 Source. Screenshot Report Save the Children 'Every last Girl'

‘World Vision’ has emphasized in its study that women in countries south of the Sahara are often at the bottom of the social order and rarely have the opportunity to go to school, earn money or own their own land. In addition, due to the lack of relevant laws, women in these countries are very often victims of domestic violence, and these incidents are rarely reported.

One of the worst and most shocking results came from Chad, where almost a third of girls are married before their 15th birthday - this high number is not found in any other country. ‘Save the Children’ found out that every seven seconds a girl in the world is forcibly married.

On the plus side, a whopping 84% of all Canadian girls over 19 have graduated from high school. There was also good news from Northern Europe: in Norway, 70% of all public sector employees are female.