How scientifically plausible is Jurassic Park

Science is also involved in many Hollywood productions. The British communication scientist David Kirby explained how this works at the Schrödinger Colloquium at UZH. 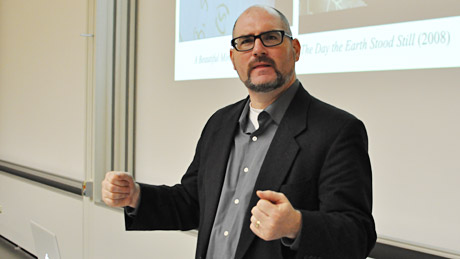 Hollywood creates dreams that are usually supposed to be as realistic as possible. The hyper-realistic style, said the British communication scientist David Kirby in his entertaining lecture at the UZH, is en vogue. In today's filmmaking, the appearance of realism is much more important than it was twenty years ago.

Paradoxically, it was films with a fantastic content that set standards in this regard. Kirby called Jurassic Parc, The Lord of the Rings or Christopher Nolans Batman-Trilogy. Films that go beyond the realm of reality have to come across as realistic in detail, said Kirby. For this purpose, the mythical creatures move in lifelike natural scenes, and superheroes operate with authentic-looking technical equipment.

In order to perfect the illusions of reality, Hollywood often calls in scientists for advice. This gives science the chance to put its own guild in the right light. Institutions like NASA, according to Kirby, have long since discovered the cinema as a PR vehicle.

Sometimes researchers also use the film industry to disseminate the latest findings in their field. Kirby once again cited Steven Spielbergs as an example Jurassic Parkwho fueled the fascination for dinosaurs in 1993. The film had a lasting impact on the image that people generally have of dinosaurs. Previously they were considered cumbersome, slow and stupid since Jurassic Park but as lightning fast and intelligent. The filmmakers put a lot of effort into realizing dinosaurs.

Yet it wasn't just scientifically proven facts that made science too Jurassic Park contributed but also some speculation. The paleontologist Jack Horner, whom Spielberg hired as a consultant, used the opportunity to propagate some of the then still highly controversial hypotheses about dinosaurs. For example, on Horner's advice, the giant lizards were portrayed as warm-blooded animals that are evolutionarily closer to birds than reptiles. There is a famous scene in the film where a velociraptor is following the trail of two children. The audience first sees him through a pane on which his breath condenses. With his call he tells his fellow species that he has found the prey. These elements are used dramatically: they add to the tension in the scene. But they also work as a visually plausible argument for the theory that the dinosaurs were warm-blooded and that some were also bird-like, according to Kirby.

Films not only convey scientific knowledge and speculation, they are often also about scientists. In such cases, the task of the scientific advisors is to ensure that the jargon and charisma of the performers are correct. For example, in order to play a biologist convincingly, the actor in question must act in the laboratory with the same naturalness as a researcher.

Picking up the bag of tricks

Actors do not always acquire the ability to move like scientists. In the movie The Day the Earth Stood Still Keanu Reeves played an extraterrestrial whose knowledge of astrophysics exceeds that of Earth humans. But Reeves did not succeed in writing the formulas on the board with the speed that physicists use. If the cinema audience takes his mathematical genius off his hands, it is only thanks to the trick technique that accelerated his movements.

Just as little would Russell Crowe have won over his bag of tricks in the role of Nobel Prize winner John Forbes Nash. For the scenes in which he's in the movie A beautiful mind Mathematical formulas were noted down, a hand double was hired. So the mathematician Dave Bayer, who was actually employed as a scientific advisor on the film project, unexpectedly came to screen appearances.

Susanne Huber is a freelance journalist.