What are some good websites for teenagers

Today's adolescents and young adults are a highly regarded target group whose leisure time behavior has already been researched a lot. An important characteristic of this age group: they grew up with digital media and the Internet and are therefore also called “digital natives”.
This study looks at the differences and similarities in the Internet use of digital natives compared to adults between 35 and 45 years of age. This older comparison group consists of people who are just as familiar with Internet use and who use the Internet regularly and naturally, but who have not grown up with it. They are not above or below average internet savvy compared to other representatives of their age group. The information provided by the respondents supports this classification. While the younger group for the most part stated that they started using the Internet when they were under 15, the older group was mostly between 20 and 25 years old when they started. The different socialization, but certainly also general differences in the behavior of young people and adults, ultimately produce the results presented below.

Which pages do digital natives surf on? Do they generally visit different sites than the older comparison group?

In any case, the spectrum of “favorite sites” decreases significantly with increasing age. This means that the youngest visit the most sites on average per surf session. But even in this group there are only very few more than 10 different sides.
As expected, there are differences in the selection of the pages visited, but there are also similarities.
The top favorite of both groups is the same: Facebook is mentioned the most, although the gap to second place is much more pronounced among the younger ones than among the older ones.
Google was also mentioned very often, although it can be assumed that this placement behind Facebook does not reflect actual usage. Rather, Google is probably not perceived by many as a “site” and is therefore not even mentioned as a favorite site.
The differences between the various groups are already clearer on the following placements: 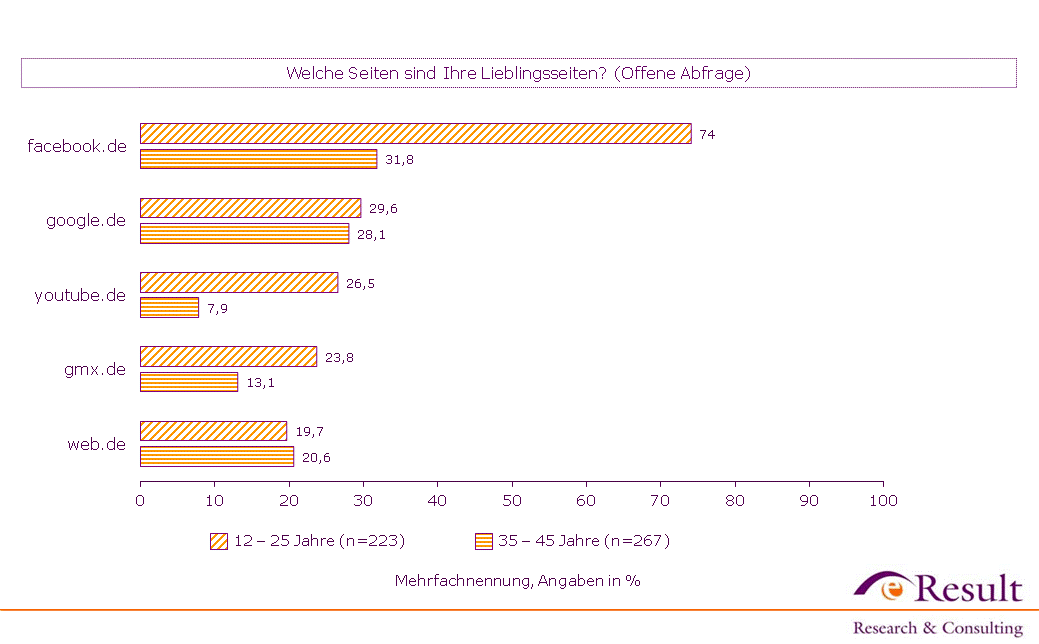 Presumably it is also due to the higher shopping affinity of the older group that on average they are significantly more frequent users who spend 25 or more hours of their free time per week on the Internet. Choosing products and browsing through shops takes time. However, there are no major differences in the choice of device that is used to surf the Internet. It is noteworthy, however, that almost half of all under 18-year-olds already have a smartphone. Nevertheless, laptops and PCs are still most commonly used for surfing, albeit with a decreasing trend. Smartphone and tablet owners use a smartphone or tablet for an average of one third of their surfing time. The increasing spread of such devices suggests that this value will continue to increase in the future.

Even if no exclusively youth-specific sites were named as “favorite sites” - digital natives can still be influenced by their culture in their surfing behavior. The younger respondents are much more likely to state that they feel they belong to a certain group, with different genres of music such as hip-hop or metal being mentioned most often as a means of identification, followed by sport, be it as a fan or an active athlete.
This group membership then also very often influences surfing behavior. Many “group members” state that most of their surfing time is related to this sense of belonging.
The fact that this can also be lived out on Facebook, Youtube or similar offers explains the lack of specific offers on the favorite sites.

What are the special features of the groups in the use of social networks?

The majority of young people spend between ten minutes and two hours a day on social networks. However, some of this group are also on social networks for more than three hours a day.
In contrast, only very few representatives of the older group use Facebook & Co for more than an hour a day.
It can be assumed that these values ​​are due to the different way of life in the different age groups. While young people spend a lot of time with their friends - offline or online - for 35-45 year olds, the focus is often on partnership and family as well as the professional environment, for which social networks are used to a lesser extent.
But it is not only the intensity of use that differs between the various groups. Differences can also be found in the type of use.
It starts with the number of “friends” you are connected to in the network. While the clear majority of those under the age of 25 have more than 50 friends, almost a fifth of the older group is networked with fewer than 10 people. The different living conditions certainly play a role here, too, after all, during your school, apprenticeship and study time, you very quickly get to know a lot of people, most of whom are also members of social networks. For those who are networked with ten or fewer people, on the other hand, these connections presumably reflect the actual closer circle of friends and family.
And what are the main uses of social networks? The usage intentions also differ in the two groups. While direct communication with each other predominates in the younger group, be it through messages, chat or pin board entries, the older group focuses on reading along and “staying up to date”. This in turn has an impact on the speed with which opinions and experiences spread within a group. A lot of communication with each other and strong networking ensure that the news classified as relevant by the group is spread extremely quickly. 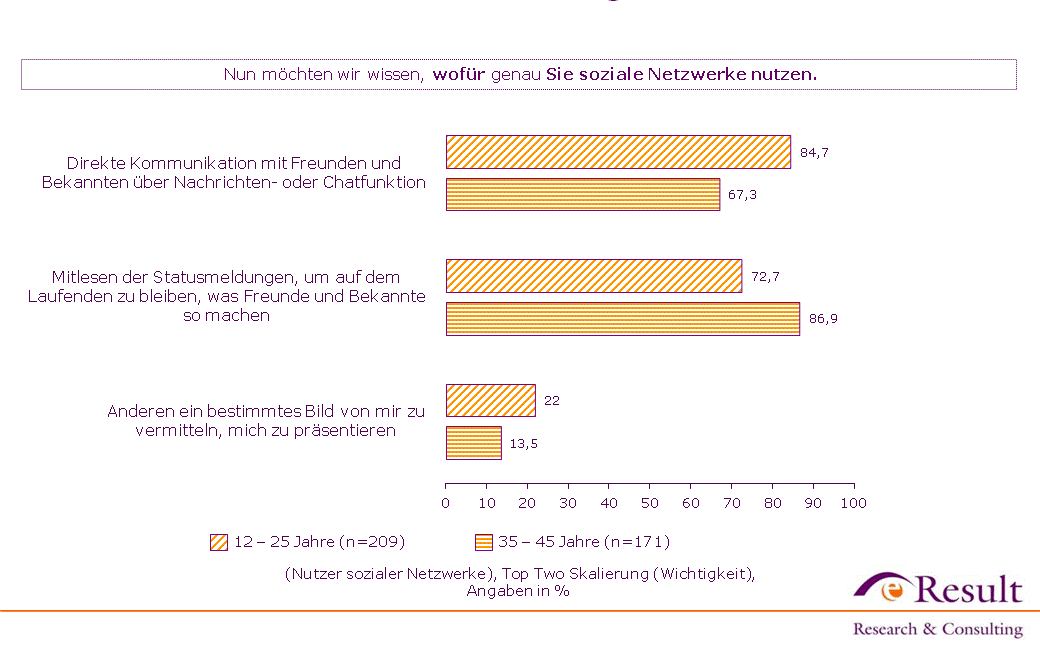 The intensive exchange between digital natives via social networks also harbors opportunities and risks for website operators and other providers. If a new page, a function, a campaign or a product is well received by the target group of digital natives, this message can spread very quickly and thus achieve a good advertising effect. However, the same also applies vice versa. If a digital native is dissatisfied with a shop or a product, that too quickly makes the rounds and can cause enormous damage to the company's image. For this reason alone, prevention through constant exchange and user-centered development is so important.

How and where do digital natives shop?

The second area that is very important to the respondents is everything related to shopping.
Apart from the fact that shopping is more important for the elderly, there are also many similarities between the two groups. Both agree, for example, on their favorite shops: Amazon and eBay are ahead. There are also no significant group differences in terms of the care with which products are selected or the willingness to return items.
Only the selection of shops beyond the absolute favorites shows differences in behavior. While the younger group is particularly enthusiastic about Zalando and H&M, the older group prefers "classics" such as Otto and Neckermann for online purchases. 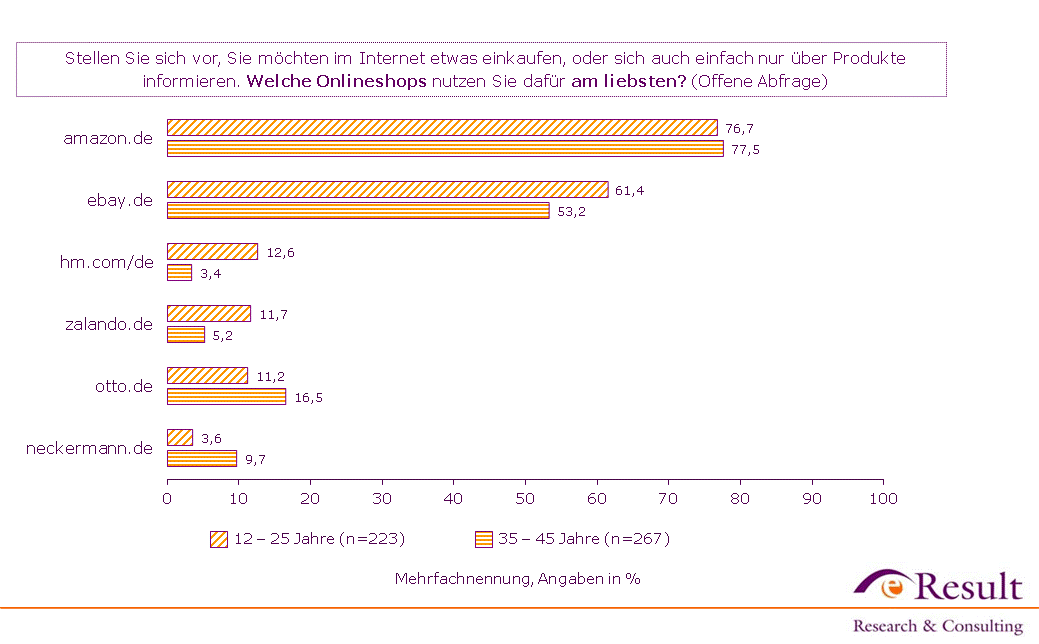 The different choice of favorite shops in connection with the different expectations of different page elements clearly shows one thing: It is extremely important to know your target group. Target group-specific requirements should therefore not only be taken into account when designing the concept for "seniors"; other age groups also have their own special demands and needs.

What is important for both groups when assessing sides in general?

Are there fundamentally differences in the requirements and expectations? There are also some findings on this.
First of all, it can be said in general that the younger respondents are on average less patient when surfing. If they can't find something on a page right away, they're quicker to give up and switch to a different offer more quickly than the older comparison group.
But also the individual content types on websites are sometimes assessed differently by the various groups.
Both groups agree when it comes to photos - these are generally a must on information pages. If they are missing, both groups are dissatisfied.
Expectations diverge when it comes to exchange opportunities with other users. In both groups, these increase user satisfaction the better they are implemented. The older group in particular does not (yet) miss these possibilities if they are not available.
The same can be said for videos. So far, they are not necessarily expected by either group, but can inspire people if they exist. In the younger group, however, higher expectations can also be found for this type of content. 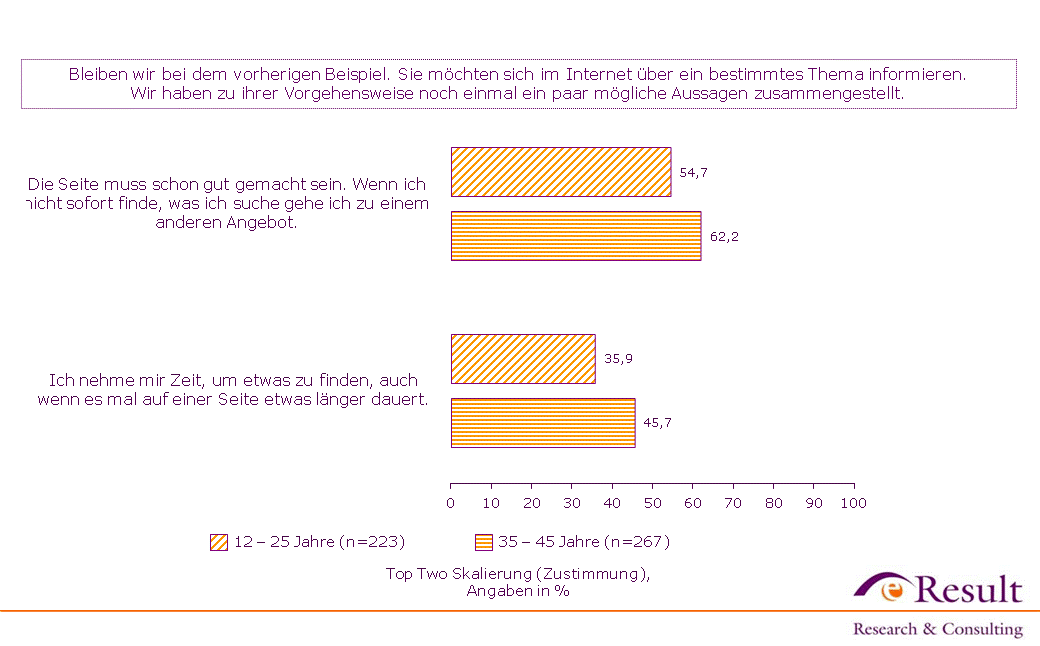 These results show that, on the one hand, expectations with regard to integrated content types increase, on the other hand, tolerance and patience decrease if something is not found on a page immediately. The fact that this tendency emanates from the younger group shows that the requirements for usability are also steadily increasing. More than ever it is therefore true that the competition is only a click away if there are problems with the usability of the page!

The results of the eresult study can be downloaded free of charge from our download area. All that is required is registration.

Do you have a different opinion?

We are very interested in your feedback on these considerations and theses.
Write us!