How can Indonesia improve its economy

Opinion: The economy is a priority when vaccinating in Indonesia

In Germany, a 101-year-old woman in an old people's home was the first person to be vaccinated against Corona. In the UK it was a 90-year-old pensioner, in Canada it was an 89-year-old. In Indonesia, on the other hand, my 92-year-old grandmother will probably be one of the last in line.

In December, the Indonesian government announced that its vaccination schedule puts medical staff at the forefront of the fight against the virus and public sector workers. Workers between the ages of 18 and 59 have priority, vaccinations for the elderly come later.

A month later, President Joko "Jokowi" Widodo was the first to be vaccinated against corona in Indonesia. At 59 he was just young enough. At 77, his deputy Ma'ruf Amin is too old to be vaccinated early. 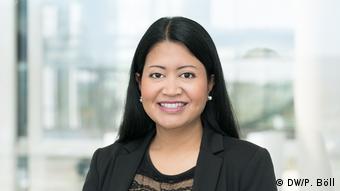 Indonesia's vaccination strategy raised questions around the world - because it is the opposite of what many other countries are doing. Senior health care workers answered them as follows: They are concerned that the vaccine from the Chinese manufacturer Sinovac could harm the elderly. Because in the final study in Indonesia no subjects over 60 years of age were used.

In addition, those responsible hope that herd immunity will be achieved quickly if the younger ones get vaccinated first. More than 70 percent of the 270 million people living in Indonesia are between 15 and 64 years old.

Growth at any cost?

But is herd immunity the real reason for Indonesia's unconventional vaccination schedule? Siti Nadia Tarmizi, spokeswoman for the Ministry of Health's corona vaccination program, told DW that there was the highest infection rate among younger people - albeit in combination with a low mortality rate. People over 60 make up only a small proportion of the total population in Indonesia, but at the same time 46 percent of the COVID-19 deaths.

The younger age group plays "an important role in economic activities for the benefit of families," said Tarmizi. "They keep the economy going, that's why we give preference to the 18 to 59 year olds when it comes to vaccination." The economy is the key word in this statement.

President Widodo has often said he wanted to take Indonesia's economy forward, and his target is seven percent growth. In his first term of office he always stayed below. Now, in his second term in office, he finally wanted to achieve the goal - but then Corona came.

In November 2020, Indonesia's economy slid into recession for the first time in two decades. Because already in the third quarter it had shrunk by 3.49 percent compared to the same month last year. Almost every sector suffered from the increasing number of corona cases. 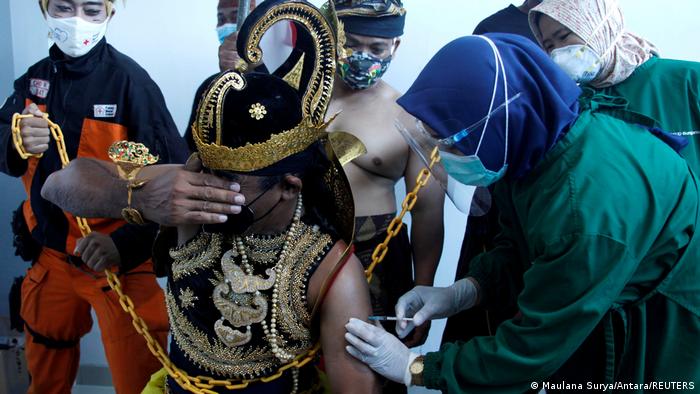 This man, dressed in traditional costume, does not even want to see how he receives the Sinovac vaccine

More fear of losing a job than Corona

The decision to prioritize the workforce by vaccination order is a sign of how badly the Indonesian government is keen to reverse the economic trend. The plan would have sparked controversy in many other countries, but most Indonesians are behind the idea. For many, the fear of losing their job is stronger than that of contracting COVID-19.

In October, Widodo defended his decision not to impose lockdowns on cities or provinces where case numbers have skyrocketed. The argument was that the negative income impact would harm people as well. "Putting health first does not mean that we sacrifice the economy. Because that would mean sacrificing the lives of tens of thousands of people," the president said at the time.

Only over time will it become clear whether the unorthodox vaccination strategy works as the government hopes. And even if it does so, will the economic recovery that ensues provide enough comfort to the thousands of Indonesians who have lost elderly relatives to the pandemic?