What are the uses of saponification

Surfactants are molecules that are composed of a polar head and a non-polar residue. Surfactants are soluble in polar and non-polar solvents and are therefore called surface-active substances. 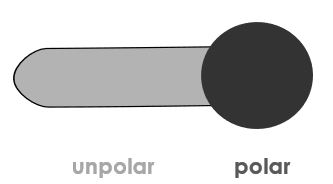 Due to their washing effect, surfactants are mostly used for body and surface cleaning.

Soaps are special surfactants. These are sodium or potassium salts of fatty acids. They have the typical structure of surfactants: a non-polar radical R and a carboxy group as a polar head.

Manufacture of soaps by saponification

Soaps are made by allowing a fat to react in a saponification process. There are two options: basic and acidic saponification.
The two mechanisms are shown below. The reaction is only shown for one ester group so that it is a bit clearer.

Basic saponification is a reaction in which a base is involved. To make a soap, caustic soda (making a curd soap) or potassium hydroxide (making a soft soap) is required.

The lone pair of electrons of the hydroxide ion of the alkali attacks the positively charged carbon atom of the ester.

But now the reaction is not ready. In a further reaction step, the carboxylic acid releases its proton, which is taken up by the alcoholate ion.

But why doesn't the proton just stay where it is? This is because the negative charge created by deprotonation is stabilized by mesomeric boundary structures. With alcoholation there are no mesomeric boundary structures and therefore the negative charge cannot be stabilized. The alcoholation is therefore significantly more unstable than the deprotonated carboxylic acid and this reaction step takes place.

Acid saponification, as can be seen from the name, is a reaction in which an acid is involved. This acid acts as a catalyst here. The lone pair of electrons on the carbonyl oxygen atom of the ester group attacks the proton given off by the acid. The attack creates a positive charge on the carbon atom. This reaction step is necessary so that the saponification can function without a base.

Then the positive charge on the carbon atom has to be balanced. Apart from that, the catalyst, i.e. the proton, has to be restored since a catalyst has to emerge unchanged from the reaction. The proton is split off again and the electron pair can "fold in" again.

Application of soaps through saponification

Reduction of the surface tension

Although surfactants have a long-chain, non-polar residue, they can be dissolved in water. This is because they form what are known as micelles. These are spherical structures that are created when the non-polar residues attract each other, as intermolecular interactions act between them. The polar heads of the surfactants form an outer shell. As a result of this micelle formation, surfactants can not only attach to the surface of the water, but also dissolve in the water. 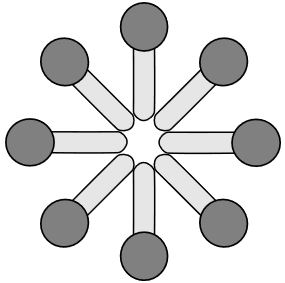 If non-polar dirt accumulates on a fiber, it cannot be removed with water because it does not dissolve in water. With the help of surfactants, the dirt can be loosened from the fiber. The following processes take place:

The fiber and dirt surfaces are wetted with surfactants. The non-polar residues of the surfactants interact with the non-polar surfaces, which creates wetting.

Since the surfactants are not arranged next to one another in a linear manner, the charged carboxy groups come into contact with one another. These repel each other, breaking the dirt apart. This creates more space for renewed surfactant deposits.

As before, the charged carboxy groups repel each other. This gradually separates the dirt from the textile fiber. 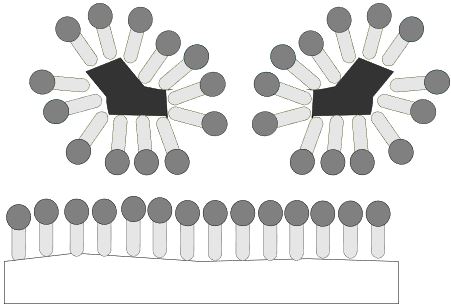 Soaps have some drawbacks, which is why we use synthetic surfactants for washing these days.

Alkylbenzenesulfonates react neutrally in aqueous solution, are not sensitive to acids and are only slightly sensitive to hard water.

Surfactants are not only used as washing substances, but also as emulsifiers. In this process, non-polar particles are surrounded by the non-polar residues of the surfactants, creating spherical structures with a polar shell, as in the case of micelles. Through the polar layer, this structure can then interact with the polar substance and it is dissolved in it.