All lawyers are morally corrupt

Issues worth discussing in terms of business ethics: corruption

Konrad Adenauer, the mayor of Cologne at the time, coined the slogan "We know each other, we help each other".

"Corruption is the highway next to the official route." - HElmar Nahr, German mathematician and economist (born 1931)

Corruption is a very specific type of white-collar crime. A confidentiality offense involving at least three parties, two perpetrators who conspiratorially do everything they can to keep the victim unaware of their role.[1] It disappoints trust, is morally questionable and punishable, as well as being economically deceptive.[2]

In terms of business ethics, an issue in the spectrum between legality / illegality and legitimacy / illegitimacy is to be assessed.

Although corruption is in principle prohibited by law, it can be discussed whether any form of bribery should also be criticized from a moral and ethical point of view.

Should, for example, managers who, for the benefit and preservation of their companies, take orders from dictatorial countries where the levying of a "commission" is mandatory (e.g. Libya, Qatar)[3], assume, be held accountable for corruption?

So-called “useful expenses”, including bribes, were neither tax nor criminal law relevant in the FRG up to 1.1.99, they could be claimed as business expenses. "US oil companies can continue to bribe governments without notifying the US Securities and Exchange Commission."[4]

Corruption is to be fought above all at the regulatory level and this in cooperation with companies and not against them. As Corporate citizens you have to interest them actively in the form of preventive measures[5] to effectively counter this ubiquitous business principle.[6]

This is the central intention of the numerous international Corporate citizenshipInitiatives.[7]

Unfortunately, the law enforcement authorities as well as companies, who are usually injured, have only limited opportunities to break the alliance between the corrupt and the corrupted, because there is no evidence to provide evidence.[8]

The police statistics show that usually more than 90% of the investigation proceedings are initiated by complaints, in the case of corruption it is less than 10%.

It should be noted that bribed companies should have a strong interest in preventing corruption because they are the victims. In the case of the bribing companies, it is exactly the opposite. But it would be much easier for them to break the wall of secrecy.[9]

In business practice, there are first examples of voluntary commitments in the form of private law contracts in which supplier and demand organizations jointly commit to freedom from corruption, corruption prevention and defined sanctions. "Such sanctions range from a reputation-damaging publication (...) to fines and the temporary exclusion from further awarding of contracts." [10] Transparency International propagates this as an “integrity package”.

This is what happened between Siemens and General Electric in the wake of the bribery scandal. 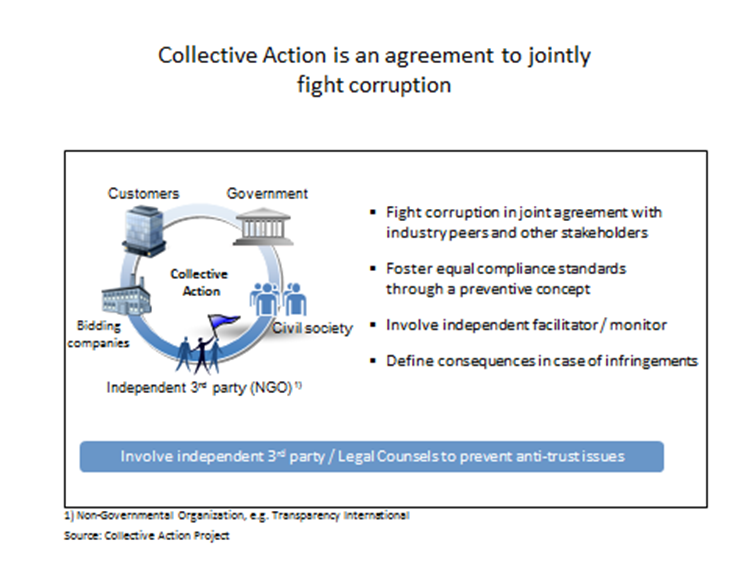 The term "corruption" has four characteristics:

The corrupt actions result in victims. The damage done is not exclusively material. Corruption causes serious immaterial damage. In addition, the number of unreported cases of damage is high because not every case of corruption is discovered.[13]

Intangible damage is characterized by the fact that it does not constitute financial damage and thus also thwart the legal assertion of claims for damages.[14]

In contrast to non-pecuniary damage, material damage can be measured specifically on the basis of assets, whereby two types of material damage must be distinguished: direct and indirect. Direct damage can be the increase in the cost of procuring services, which is above the market price. Further damage can be the award of projects that are not necessary or unnecessary. This indirectly leads to a lack of budgets for relevant projects. Another direct damage is the inferior quality that public officials approve of through bribery. Indirectly, the lack of quality leads to repairs and / or increased wear, which causes additional costs for the buyer, in this case the state.[15]

Quite a few cases are known in which projects are only realized because this is what makes corruption payments possible in the first place. In development projects in particular, it is possible to identify where large-scale projects are given preference, investments in physical capital displace human capital investments, or armaments expenditures are made instead of expenditures for education or health.[16]

Corruption is in situational and structural Corruption divided. This distinction is particularly relevant for preventing corruption, because the motives for the respective species are different and must therefore be approached differently.[17]

Situational corruption is characterized by spontaneity or an opportunity. In Anglo-Saxon it is called "petty"Or"low level corruption“Known because it is not designed for repetition, but contains the danger of serving as a basis for further corrupt actions and thus turning into structural corruption.[18]

The relevance of the determination of causes and motives results from the fact that these must be known so that they can be prevented or at least the attempt to prevent them can be started. There is no single cause applicable to all acts of corruption, however, have been identified by Mischkowitz / Bruhn worked out three levels at which factors can arise that favor the occurrence of corruption in connection: the individual, the institutional and the macroeconomic Level. Various causes can be divided into two types of corruption.[21]

At the individual level it is mainly frustration at work, little to no identification with the employer, the feeling of underpaid for one's own performance and excessive ambition.[22]

Whether someone is acting corrupt[23], is determined by three factors:

Bannenberg dealt with the different types of perpetrators involved in different types of corruption. No “standard perpetrator type” could be determined for situational corruption, because the perpetrators had nothing in common and a grouping of perpetrators was therefore not possible. For structural corruption, on the other hand, two “standard types of perpetrators” could be identified. The first type is referred to as the “cheater personality”, which can be characterized by the following characteristics: These perpetrators have an extroverted and dissolute lifestyle. The basic motive for their corrupt act is the strong feeling of underpaid, which they wanted to compensate by abusing their position of power. The second type of offender is the "conspicuously inconspicuous". His motive for corruption is to speed up procedures and the resulting lower costs for the employer, as well as compensation for his high level of commitment.[25] 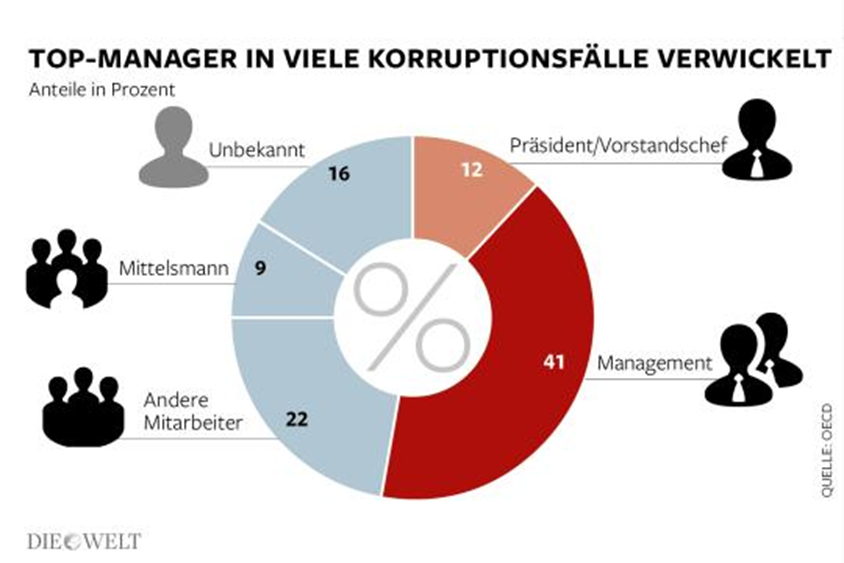 An institutional value system, which is contradicting itself, favors corruption. This can be the case, for example, when bribery is accepted / tolerated when selling, but condemned by the employer when purchasing.[27]

In a Germany-wide survey Mischkowitz / Bruhn to the result that the decline in values ​​of a society serves as a facilitating factor for corruption. The lack of role models in society for correct behavior also plays a role. In addition, overregulation and the increase in norms with simultaneous uncertainty and pronounced lack of understanding are seen as contributing factors to corruption.[28]

The role of “corporate citizenship” that is reassigned to companies today means that they must also constitute themselves as partners with moral integrity.

The majority of the most respected and supposedly well-managed companies on the globe, with published codes of conduct, business missions and compliance departments, have always struggled with corruption. However, the risks of actually being involved in such a case increase.

It can therefore be assumed that a paradigm shift rather than an intensification of surveillance and control will have a more lasting effect on corruption prevention.

It is about avoiding corruption-prone situations instead of regulating how to deal with them when corruption has occurred.

To prevent corruption in companies, basic rules should apply such as:

Current reports from the Federal Criminal Police Office show that even in economically strong countries like Germany, corruption still occurs to a significant extent. In the years from 2011 to 2015, a total of more than 90,000 corruption crimes took place, which were accompanied by over 9,000 other crimes. One can only speculate about the number of undiscovered crimes. Corruption leads to permanent damage, especially in a social market economy. “Corruption in German authorities causes economic damage of two billion euros every year. Almost every second office in the Federal Republic is affected. "[29]

Germany is - yet - not a banana republic[30], but still a lot of illegal and illegitimate things happen here.[31]

Regardless of whether “renowned” DAX companies (VW, BASF, AUDI, DAIMLER) and others, chief physicians, pension funds, municipalities and politicians, neither a professional group nor an institution can be excluded International Corruption Day, two thirds of Europeans consider bribery to be inevitable, not surprisingly.

Bribery is TI Widespread in 180 countries. Somalia ranked first Afghanistan, the Iraq, the Sudan and Burma as the most corrupt state. In the EU are these Bulgaria, Greece and Romania. The opposite is true for New Zealand, Denmark, Singapore and Sweden, they are in front of the Switzerland the most corrupt countries. Germany and Austria still perform relatively well, the United States[32] are in 19th place. Corruption must be combated at the level of government leadership.[33] For example, the measures of OECD[34] and the G20 against tax havens welcome. “Corrupt money must not find a safe haven”.[35]

“The arms industry is known to be particularly susceptible to corruption. This view is reinforced by the secrecy of delicate arms deals, which is customary in the industry. The estimated damage caused to taxpayers through corruption amounts to 15.4 billion euros per year worldwide (...) When it comes to bribery, the armaments sector is almost at the forefront of the industry. According to the figures from 2002, it is only in the construction industry that there is more “lubrication” than in the arms business. "[36]

In the biggest corruption scandal in Germany after World War II, around 1.3 billion euros in illegal payments flowed.[37] In terms of costs and penalties in Germany and especially the United States 2 billion euros were necessary. Added to this are the enormous expenses for the new organization. The specially set up board area alone "Legal & Compliance" employs more than 600 highly qualified employees.

House efforts Siemens to limit damage and ensure the Corporate governance are not only huge, but also exemplary in the meantime.[38]

Under the slogan "Collective Action: How to create fair market conditions" the following conclusions were drawn and measures were taken[39]:

For the first time, such incidents were dealt with with corresponding sanctions against those responsible in top management.[40] Whether the respective payments, whether they were won in court or achieved through settlement, do justice to the misconduct, remains to be discussed.[41]