Why should I study forensics

Investigators are often portrayed as all-rounders in the TV “crime scene”. Law students at the University of Vienna can learn how crime scene work is done in reality from Aline Girod-Frais.

How did you get the idea for the course “Theory and Practice of Crime Scene Work”?

Aline Girod-Frais: In Switzerland, forensics is viewed as an independent science - the "science of the track" - and you can study it in the Bachelor / Master / PhD system, which is what I did. Students deal with the securing and evaluation of traces at the crime scene and in the laboratory. Otherwise such a degree hardly exists anywhere in Europe. After my PhD, I came to Austria to do my postdoc project “The Importance of Forensic Science in Austria” in the Department of Criminology of the Faculty of Law in Vienna. After reading a little about the Austrian law course, I thought to myself: The students are approaching lawyers and public prosecutors, but they have no idea about forensic evidence. But since I thought it was exciting and important to make these aspects accessible to them during their studies, I developed the course.

Why doesn't forensic science exist as a degree in Austria? 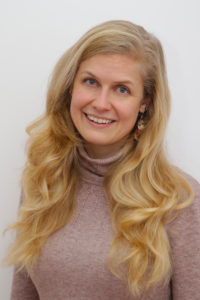 I think there are historical reasons for this. Modern scientific policing began around the beginning of the 20th century. There were corresponding key figures in the respective countries. In this country it was Hans Gross, a trained lawyer who understood very well that translators are needed to work with traces. He called it criminology, which for him was more of a methodology of translation so that lawyers can work with the meaning of the traces. He saw it as an aid to jurisprudence, that is, a partial aspect. When he died, no one took it up the way he did, and criminology has slowly disappeared from the university. It was different in Switzerland. There Rudolf Reiss was of the same opinion as Gross, but he considered the "Criminalistique", or forensic science, to be an independent science and therefore convinced the University of Lausanne in 1909 to create a course.

But online you can find the master’s course forensic sciences at the University of Vienna, with a tuition fee of 15,000 €?

I am glad you asked that question. Before I came to Austria, I was interested in this course and thought to myself that maybe I could teach there. However, I have not received any response to my request. When I got the position here at the Institute for Criminal Law and Criminology, I continued to try to get information about this degree. Ultimately, it turned out that this course has never taken place and will not take place in the foreseeable future. It is now written on the website that the course will be postponed indefinitely. Maybe there are no interested parties because the study is not cheap. I dont know.

Many students have probably registered for your course?

Yes, I had around 200 interested parties this summer semester. But unfortunately I only accept twenty participants because we are also doing an excursion in the training laboratory of the Security Academy (SIAK) in cooperation with the LKA Lower Austria. There the crime scene officers present real cases and my participants can try out methods for securing and making traces visible, so unfortunately I can no longer accept students. The course should take place again in the next semester. 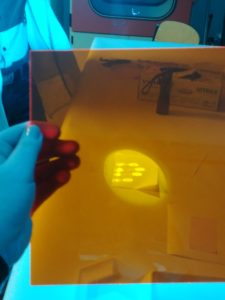 © Dominik Hauer The truth comes to light: Students in the forensic investigation.

How do you teach your participants to look for clues?

Here at the institute we discuss theory and real cases together. I show photos of real incidents that we comment on with each other. The participants are then assigned a case that has been published in the specialist literature and have to give a lecture on its most important lead. Laboratory work will be practiced during the excursion. The students can then work with powder for fingerprints or various chemicals to make blood visible.

Have you ever sat on a case for a really long time or on one that was even impossible to solve?

I worked in a crime scene group in Switzerland for a while, but I never actually sat on a case alone for a long time. The cases have all been resolved, mostly thanks to the combinations of information we got through the clues and facts that investigators were able to unearth. This collaboration is really important for each case and is the only way to work that actually works. This is why good communication between everyone involved is so crucial.

What was your most banal lead so far, with which a suspect could be "convicted"?

I will always remember a break-in that was told to me by my Austrian colleagues. A perpetrator blew up an ATM and tried not to leave any traces. He even covered the video camera with the page of a magazine so that no usable pictures could be taken of him. But he had taken this page of the magazine with him from home, and although he wore gloves during the act, he had none on at home. And it was precisely these traces that ultimately made his identification possible. It is often like that - even if perpetrators are very careful and consider a lot, it is often these potential errors that crime scene investigators and forensic experts focus on.

You say that the communication of forensic results between the crime scene group, investigators, prosecutors and judges often needs to be improved in practice. Why?

I work in and for Austria, but would expand it and identify it as a general problem. The current situation in forensics can be compared with medicine. Paramedics and emergency personnel, general practitioners and specialists take care of patients. After an accident, the patient is no longer in the hospital, treated by the general practitioner, who also coordinates the next treatments. In forensics we usually have police officers as emergency personnel (crime scene officers, investigators) and specialists in police or private laboratories who take care of inquiries from public prosecutors or judges, the "customers" of forensics. The “general practitioners of forensics” are missing. The "clients" have to talk to either the police or specialists, with no general practitioners coordinating the information. It would be like if a patient only comes into contact with emergency staff or a senior doctor in a very specialized area after a stay in the hospital. I'm sure I'm exaggerating. However, many specialists are not used to translating their results for people who come from another subject. This does not lead to serious errors, but there is a risk that information from forensic intelligence is misunderstood or not used sufficiently. Therefore, “general practitioners of forensics” are necessary and can be trained, for example, with a degree as in Switzerland. 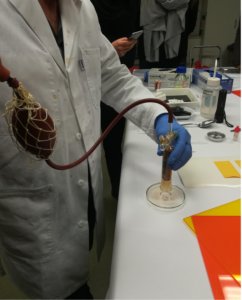 In order to examine the strengths and weaknesses of the local police and judicial system in the area of ​​forensics, they conduct anonymous surveys with volunteers from the Federal Criminal Police Office, the State Criminal Police Offices and the judiciary: What did your first survey reveal?

In my first round, I focused on DNA specialists who work in private laboratories and in the Federal Criminal Police Office in Austria. For example, I asked them whether their results are understood - the way they communicate them and whether they think there is something that can be changed. It turned out that sometimes information is not used enough or not properly understood. You can imagine it like this: During DNA analysis, various “parts”, so-called loci, of the chromosome are examined. Over time, the technology will get better, so you can analyze more and more loci. And in my survey, a case was mentioned in which a person profile resulted in a hit on a crime scene trace. With this result, a person was identified as the perpetrator. Later, however, as more loci could be examined thanks to the new state of the art, the person profile and the trace profile were analyzed again. It turned out that the additional loci led to the exclusion; the person profile and the crime scene trace profile showed differences in the area of ​​these loci. The court understood that the laboratory had made a mistake. That was problematic, so the DNA experts had to explain to the lawyers that the standard technology of the time just couldn't detect these differences. The example shows that all forensic results are just probabilities. Although very high, lawyers still tend to speak of security that forensics can never provide. Therefore, communication problems can arise.

Were there any surprising incidents when working with the students, such as ideas being influenced by TV formats?

I always find working with students extremely interesting. In the beginning, they often know very little about physical traces and how they can be saved and analyzed. But at the end of my courses you show a very logical way of thinking and you realize when something that is shown on TV is not real. Thus, in my opinion, the aim of the course has been fulfilled.

What is your impression of TV series like “Tatort”?

In principle, none of these broadcasts are wrong. But the problem is often the role of the people involved. The show is supposed to remain exciting, and if all the relevant actors were really shown, the viewers would not know their way around. It often seems as if commissioners can do everything. They work with traces at the crime scene, conduct interviews and take blood. That's not true at all. Although the methods shown mostly actually exist, they are often used incorrectly. For example, with a certain visualization method for fingerprints, the trace has to be vaporized in a transparent cabinet with a polymer which is toxic in gaseous form. Therefore, the cabinet must not be opened during this. On TV, the actors usually reach in, so that the vapors flow out and are nicely inhaled by the people present (laughs). 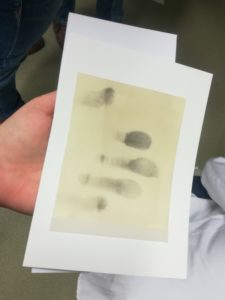 © Dominik Hauer Course participants show the traces with which they work.

You have always loved playing detective. Has it always been clear to you that you will stay on the scientific side - and not become a commissioner?

I've always been interested in traces and everything that is interdisciplinary. I could never tell if I preferred chemistry, biology, or languages ​​in high school. As a teenager I took a closer look at the work of the police and it already seemed to me at the time that the traces were used there, but you didn't really work with them chemically or biologically. But that interested me, so I then studied forensics. Maybe the police school scared me off back then. I am not unsportsmanlike, but the sporting achievements there were not without. (laughs)

Are you going to fictitiously process your work in some form - in the form of a novel or a series?

Yes, I could very well imagine that. I read a lot and write occasionally. Since I suffer from a lack of time, I have unfortunately not finished anything yet. Should I ever have more time, I will almost certainly be writing a crime novel or book. Who knows!

Forensics degree: there is a translation problem

Investigators are often portrayed as all-rounders in the TV "crime scene". Law students at the University of Vienna can learn how crime scene work is done in reality from Aline Girod-Frais.