How much Venezuelans hate Nicolas Maduro

Venezuela and the USA: From friend to enemy

There has been a discord between Washington and Caracas since Hugo Chávez was elected more than 20 years ago. For a long time, the United States had more ties to Venezuela than to its neighboring countries.

At the beginning of the 20th century, for example, the dictator Juan Vincente Gomez made generous concessions to US oil companies - and thus laid the foundation for what would later become the backbone of the Venezuelan economy. This business relationship lasted for decades, even when Venezuela founded its own oil company PDVSA and later US governments tried to profit even more from the country's wealth of resources.

The pro-US policy also contributed to the fact that Venezuela, unlike other Latin American countries such as Guatemala and Chile, avoided US interventions.

The opposite of Cuba

On January 23, 1958, a coup overthrew the right-wing military dictatorship; the then burgeoning democratic movement in Venezuela grew stronger. The new political leadership sought - inspired by a stay in the USA and the encounter with the local democratic system - to build a moderate government. Venezuela has the largest oil reserves in the world, but has been producing less and less for years

Washington found the transition from dictatorship to democracy in Caracas to be gentle, largely because political developments had no impact on the two countries' oil deals.

Just a year later, the region was shaken by the Cuban Revolution. In the course of the events on the island nation, Venezuela and the USA moved even closer together: While Cuba under Fidel Castro saw the Soviet Union as a precursor and the USA as an enemy, Venezuela became for the USA a prime example of a state in which democracy, Freedom and economic progress could flourish without socialism.

Hugo Chavez was the first to change the political relationship between the USA and Venezuela fundamentally. As a soldier, he was tasked with fighting Cuba-backed guerrilla fighters who were targeting the country's democratically elected government. Chavez, who adored Cuba, saw the rebels as freedom fighters.

In the 1980s, a debt crisis weighed on the Venezuelan democracy, which was already plagued by corruption. When the political leadership embarked on austerity packages imposed by Washington at the expense of the people, Chavez turned against the establishment.

His attempted coup in 1992, which ultimately failed, hit a nerve with the population. In 1998 Chavez won the presidential election. He soon turned against the US and the oil industry.

Venezuela's close relations with Cuba under Chavez increasingly strained relations with Washington. In 2002 an attempted coup against Chavez failed. The trigger was a protest in the form of a general strike against Chavez's attempts to control the Venezuelan oil industry more closely. 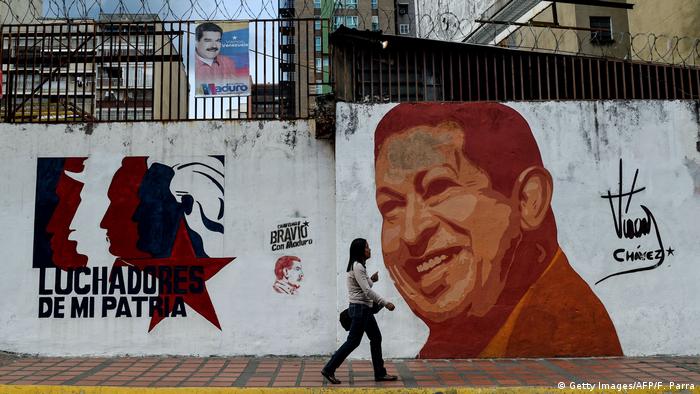 Hugo Chávez, who ruled from 1999 to 2013, divided the international community with his controversial politics

He then pushed the nationalization of the oil industry even further and accused the USA and its foreign intelligence service, the CIA, of having been involved in the coup attempt.

In the years that followed, he took his anti-Americanism to extremes. The course of confrontation culminated in a speech to the United Nations in which he described US President George W. Bush as the "devil". Chavez became the darling of the international left, leading a coalition of left governments in Latin America that saw Cuba as a friend and the US as an enemy.

The Bush administration responded with open support for the growing opposition movement in Venezuela. Chavez, however, continued to enjoy massive popularity among the population, especially the poor - even as concerns grew that his government would become increasingly undemocratic.

It was only with the election of Barack Obama in 2008 that Washington's Venezuela policy changed. Obama did not approach Chavez, but the US stayed out of the conflict and reduced its support for the government opponents in Caracas.

Maduro era: a country is sinking into chaos

Ten years later the cards have been completely reshuffled. Nicolás Maduro, successor to Cávez, who died in 2013, ousted the opposition-led parliament in 2017. At the beginning of January 2019, despite massive international protests, he was sworn in for a second term. A majority of the opposition boycotted the election last May, and numerous states did not recognize the result.

Meanwhile, the deep economic crisis that sparked the largest refugee crisis in Latin America to date continues. According to the UN, around three million Venezuelans have fled abroad because of the disastrous supply situation since 2014. Protests against Maduro regularly lead to violent clashes, with at least 120 people killed in 2017 alone.

Even outside of his own country, the 56-year-old failed to match the popularity of his predecessor. He gradually lost his former allies of Venezuela as center-right governments took over the reins there.

With Trump, the feud returns

In Washington, President Donald Trump has relaunched the course of confrontation with Caracas. In contrast to the Bush era, however, this time Venezuela is isolated.

For the massively weakened opposition in Venezuela, the decision to accept support from Washington is obvious. It is no coincidence that Juan Guaidó declared himself interim president on January 23, the day on which 61 years ago the first generation of Democrats in Venezuela overthrew the then dictator Marcos Pérez Jiménez - inspired and supported by the United States. From the opposition's point of view, at least, what connected the two countries in the past has continued to this day.