What was the first census 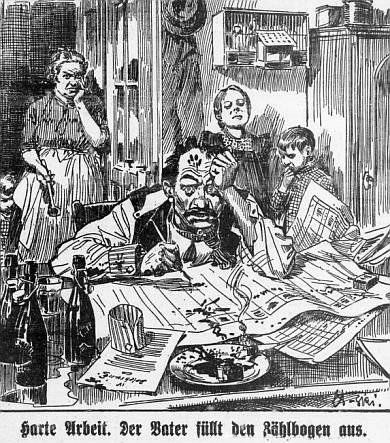 Caricature of the completion of the counting sheet (1910).

The first census was held under Maria Theresa in 1754 (city and suburbs 175,403 inhabitants), but was mainly used for conscription (conscription office).

Gradually more and more detailed surveys were included in the censuses, so that finally a wide variety of data on population development, socio-spatial structure, but also on the economy, education, transport and so on were collected.

With the census of December 31, 1869 (the first according to the new census law of March 29, 1869) the era of modern census systems was ushered in for Vienna as well. From now on, the entire population present (permanently or temporarily) was recorded according to a uniform demographic, social and occupational structure catalog.

Poem for the census in the Illustrierte Kronen-Zeitung of December 30, 1910.

The counts, held at the end of each year, were carried out at ten-year intervals from 1880 (1890, 1900, 1910). Surveys and processing were originally carried out by the municipalities, the publication of the results was carried out by the k. k. Central Statistical Commission (Vienna as the imperial capital and residence city was presented separately; in addition, the Vienna results of 1869, 1880 and 1890 were published in special, mostly more detailed and above all district-differentiated edits, most of which came from the statistical department of the magistrate; statistical office ). From 1890 onwards (apart from the apartment census), processing was carried out by the Central Statistical Commission, but the presentation of the results by district only appeared in the City of Vienna's Statistical Yearbook. 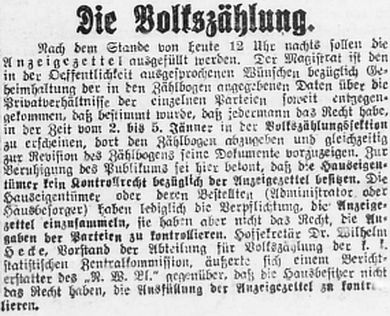 Report on the census in the Illustrierte Kronen-Zeitung of December 30, 1910.

In all publications of the 1869-1910 censuses, the district results are shown on the basis of the civilian population present, while the information for the military personnel stationed in the city appear summarily and separately. With the First World War, the period of continuous further development of the census system was interrupted. The censuses of January 31, 1920 and March 7, 1923 only provided fragmentary results, but there is a detailed magistrate special evaluation of the 1923 census for the field of occupational structure. Only with the census of March 22, 1934, based on an amendment to the law of 1869, was there a full census again, but now based on the (permanently present and temporarily absent) resident population. As in 1920 and 1923, when presence was still the criterion for presentation, members of the military were no longer shown separately. The census carried out after the so-called "Anschluss" on May 17, 1939 had a different representation basis with the so-called "permanent population" (that is, the resident population without the soldiers and workers who were sufficient for their service) and also deviated from the Austrian tradition in its occupational classification from.

From 1951 the resident population again formed the basis of the censuses (all persons who established the center of their life relationships at the place of payment, but who do not necessarily have to be present on the reference date). With the growing number of second homes outside Vienna, this demarcation criterion has increasingly become a point of contention. 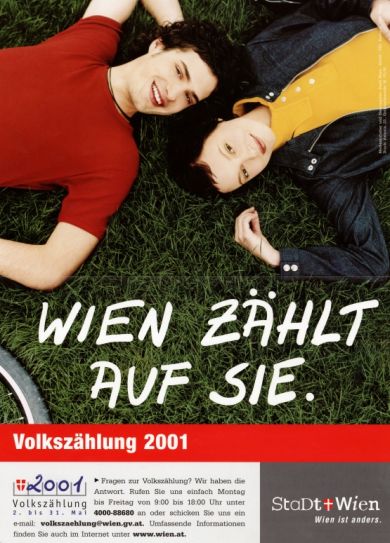 Advertising by the City of Vienna for the 2001 census.

Since the 1971 census, the principle of family residence has been anchored, which should exclude the allocation of family members to different places of residence, especially underage children. The 2011 census took place for the first time in the form of a register census without interviewing households by merging registers.

Workers who had left their wives and children in their home country were considered "only temporarily present" in 1971 according to the definition of residence at the time, but have been included in the resident population since the 1981 census based on the Census Act of April 16, 1980.

From this census onwards, a distinction was made between "real" and "fake" one-person households. The latter arose from family members who were actually or supposedly separated and had multiple places of residence. Military and civil servants are also counted among the working population, provided they were previously employed, as well as relatives who work in the family business.

Population history Compare the information for the individual city districts.