How is the automotive market doing

In a business survey, the Munich Ifo Institute examined the expectations of the German automotive industry and discovered signs of economic recovery. As the institute announced on Thursday, business expectations have "turned significantly positive for the first time in seven months. The expectation indicator rose in June to plus 27.7 points after minus 11.9 in May."

However, the current business situation within the industry is still viewed very pessimistically. The business climate index for the auto industry rose "only slightly to minus 81.8 points" in June. In the previous month it was still minus 85.6.

Some light in employment

In the meantime, the Wolfsburg-based car manufacturer Volkswagen has lifted the pandemic-related short-time work again after around three months. In mid-March, the group stopped production and applied for short-time work for around 80,000 employees,

In contrast, the figures from the Ifo Institute show no signs of recovery in the employment situation. The situation even worsened because the personnel planning indicator fell in June: from minus 50.5 in May to the current minus 54.4 points. In the course of the financial crisis in April 2009 it was minus 50 points.

However, since the order backlog is being "assessed positively" for the first time in more than a year, this could have a positive effect in the medium term: "More companies want to expand their current low production again."

Lots of shade during training

The German Chamber of Commerce and Industry (DIHK) also published the results of a survey among 15,000 companies on Thursday. Accordingly, the virus pandemic is the decisive but not the only reason for the decline in the number of apprenticeships.

In parts of the auto and supplier industry, the economic situation deteriorated last autumn. In addition, the training offer reached a record level in 2019, while at the same time around 60,000 registered apprenticeship positions remained vacant.

Glimmer of hope from the Far East

The economic researchers from Munich are subdued when looking at exports. Foreign business seems to be cautiously recovering. The export expectations indicator is currently in positive territory again, for the first time in around a year and a half. In June the measured value was up at 16.8 points, while in the previous month it was still in the negative range at - 8.7 points.

The Chinese car market is currently continuing its recovery from the corona slump. Based on preliminary data, sales rose by around eleven percent to 2.28 million vehicles in June compared to the same month last year, said the Chinese car manufacturer association CAAM. After the slump in sales at the beginning of the year, when the corona shutdown paralyzed the Chinese economy, the months January to June saw a total sales drop of 17 percent.

The Chinese car market, which is so important for German manufacturers, has been weak for a long time. In 2019 it had shrunk for the second year in a row. The tariff dispute between the USA and China and the weaker economic growth in the People's Republic had left their mark. 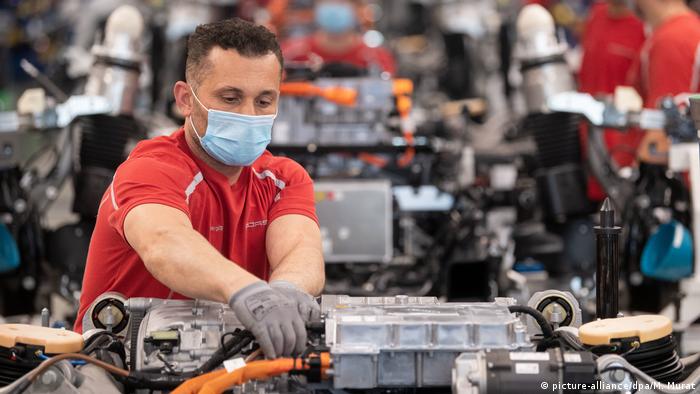 Production with face mask at Porsche AG in Stuttgart

Huge slumps in US business

The economic researchers from Munich are subdued when looking at exports. Foreign business seems to be cautiously recovering. The indicator of export expectations is currently - and thus for the first time in around one and a half years - in positive territory again. In June, the measured value grew to 16.8 points plus, in the previous month it was still in the negative area, at -8.7 points.

The sales figures of car manufacturers in North America currently speak a completely different language: The corona pandemic severely slowed the US car market in the second quarter. In the three months to the end of June, Volkswagen only sold 69,933 new cars, as the company announced on Wednesday at its US headquarters in Herndon, Virginia. This corresponds to a drop in sales of 29 percent compared to the previous year. In the first half of 2020, VW recorded a 22 percent drop in sales.

Minus also at the daughters - and at BMW

The group subsidiary Audi also suffered a severe setback - here quarterly sales dropped by 35 percent year-on-year to 34,843 cars. In the year to date, sales have fallen by a quarter. The sports car manufacturer Porsche, which is also part of the VW Group, got rid of almost 20 percent fewer cars in the second quarter.

The German premium supplier BMW suffered particularly badly from the Corona crisis. Only 50,957 new cars of the original brand could be brought to US customers from the beginning of April to the end of June, a decrease of a good 39 percent compared to the same period last year. Since the beginning of the year, sales have fallen by around 28 percent. At the subsidiary Mini it looked even worse, there was a decrease of 42 percent in the quarter and 39 percent in the year to date.