"Dear guests" - How do Koreans feel in Kazakhstan?

How the Koreans of Kazakhstan perceive their ethnicity and the relationship to their historical homeland and language is the subject of the new study Tracing the Language Roots and Migration Routes of Koreaners from the Far East to Central Asia the American linguist and sociologist Elise S. Ahn (University of Wisconsin, Madison) featured in the scientific journal Journal of Language, Identity & Education has been published. The following article was published in Russian by Fergana News; we have translated it with the kind permission of the editors.

In 2015, Ahn and her colleagues conducted interviews with 26 Koreans from the Kazakh diaspora. They were interested in people of all ages (18-67 years) and professions - students, business people, engineers, accountants, lawyers, managers. Participants from both Almaty and southern Kazakhstan were selected and interviews were conducted in Russian and English. The scientists tried to dig into the family history of the Koreans and to get to know the difficult routes by which they came to the region, as well as their ideas about homeland, home and the Korean language. And to ask the main question - what does it mean to be Koreans in Kazakhstan today?

Let's start with the story. The first recorded migration of Koreans to the Russian Empire occurred in the 1860s when thirteen families moved from overpopulated Korea to the Primorye region. In 1884 they were officially approved to apply for Russian citizenship. At the time of the first Soviet census, there were 87,000 Koreans living in the country, the vast majority of them in the Far East. However, in 1937, they were the first in the USSR (ahead of Germans and Crimean Tatars, Greeks, Chechens and others) to be deported because of their nationality. In 1937, on the basis of a resolution of the Council of People's Commissars of the USSR, on the pretext of "To suppress the penetration of Japanese espionage into the region of the Far East", relocated to the Kazakh and Uzbek SSR. The Koreans, who often lived in border areas, were suspected of lack of reliability (we recall that Korea was a Japanese colony at the time). A total of about 180,000 citizens were deported and about 100,000 were housed on the territory of the Kazakh SSR.

The deportation to Central Asia hit the Koreans particularly hard with regard to their mother tongue. By 1937, there were dozens of schools teaching Korean in the Primorye region. Newspapers and magazines were also published in Korean and there was an educational institute. Even after the expulsion there were still Korean schools - but from the war years onwards, Russian became the language of instruction there too. The gradual turning away from their own mother tongue began. According to the 1979 census, 47.7 percent of Soviet Koreans spoke [exclusively] Russian. The loss of language continued in the post-Soviet years.

From Japan to the USSR

The deportations did not end in Primorye. The southern half of Sakhalin Island, which Japan received after the defeat of Russia in the Russo-Japanese War and which became Karafuto Prefecture, was also affected. Between 1939 and 1945 the Japanese drove 60,000 Koreans there to do forced labor, most of whom remained on the island after Sakhalin was annexed to the territory of the USSR. For a long time they did not get Soviet citizenship, but were not released home and used as valuable workers (fishermen, miners, lumberjacks). They did not receive passports until 1953, after which many moved to Central Asia.

Eventually, the Korean diaspora in Soviet and later independent Kazakhstan was enriched by nationals of the Democratic People's Republic of Korea who stayed abroad after completing business trips or studying. After 1991 business people and technical specialists from South Korea joined them. All four waves of Korean migration to Kazakhstan (a small fraction of the nearly six million Korean diaspora worldwide) are shown in Figure 1.

Remembering the deportation and forgetting the language

Like many other groups living in diaspora (e.g. Jews or Armenians), Koreans take the traumatic event from which their life story in Central Asia starts - the Stalinist deportations - extremely seriously. Despite the fact that Ahn's interviewees are third or fourth generation Kazakhstan people, they remember the 1937 deportations best from their families' history and always talk about them, confronting them either with fear of Japanese spies or with Stalins Connect plans for socialist restructuring of the country.

The lines on Figure 2 show the wide variety of routes that the respondents' ancestors led to Kazakhstan, but the Stalin resettlement is mentioned more often, with a large gap. The exertions of the journey, the migrations in the USSR and the escapes from the deportation trains to Siberia were kept secret. 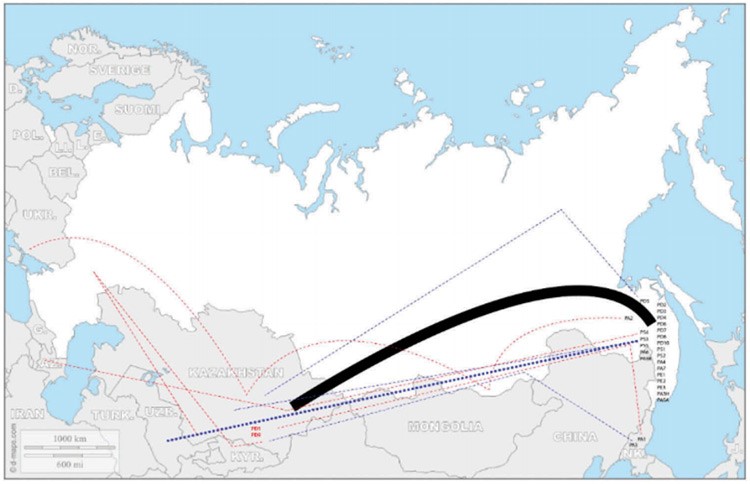 The study confirmed the loss of the Korean language in those born in the 1980s and later. Respondents only remember how their parents and grandparents spoke Korean, and emphasize that the language was different from the language used in South Korea. Many remember Korean as a "secret language": “We spoke Russian in the family, but when dad and mom wanted to hide something from us or from strangers, they switched to Korean. For example, when it came to money " (Inna, 32, engineer). The language of origin is forgotten, but its function - to draw the boundaries between one's own and the foreign language, to keep secrets - the memory of it is preserved.

"Everyone Tells Koreans to Speak Korean"

An equally important element of self-image is the feeling of embarrassment because you don't know your native language. It is this feeling that motivates you most to learn Korean. "Sometimes I feel like I should learn just to be able to say ... - I'm Korean and I speak Korean" (Elina, 24, English teacher). “Everyone tells Koreans to speak Korean. These are our roots. So it would be interesting to learn " (Dima, 30, finance officer). In this way, although the mother tongue of all interviewees is Russian, they grew up among other peoples, received a good education, they still believe in the deep natural connection between people and their language. And to the feeling of duty comes that of remorse and shame. “Korean is the language of my people. But I can't call it my mother tongue because I don't speak it ... If I had understood in my youth that I was losing my language, I would have asked my grandmother to speak Korean with me and with my parents " (Ludmila, 63, accountant). "It is not good in life to lose touch with your roots, so it would be interesting to learn them" (Dima, 30, CFO). “It is important to know where you are from. I have Armenian friends who speak their mother tongue even though they are already in the third generation [outside Armenia] ... If I knew my mother tongue, it would be better ” (Dima, 30, finance worker).

But in addition to these ethnically colored emotions, many Koreans see their language as a valuable resource for life. Lena (35 years old, manager) made the fundamental decision not to learn Koryo-Mar (a dialect spoken by Koreans of the former Soviet Union) but the modern South Korean dialect: “I don't see any point in learning Old Korean. That is only useful for studying history. " Taking a pragmatic approach and linking the language with future career opportunities is very common. “My children are not learning Korean. I'm not going to force them ... There is no need to learn the language now. But in the future ... I see a lot of opportunities for Koreans. It's a more rational view " (Marina, 40, restaurant manager).

Where is home already?

The ethnic identity of the Koreans in Kazakhstan was just as flexible, fluent and complex as the attitude to language. Inna, for example, cannot call herself Korean in the full sense - she is Korean by origin, speaks Russian, lives in Kazakhstan and stays opt for Kazakh. Ekaterina (25, unemployed) feels more like a Russian: - "I have a Russian name, I prefer Russian cuisine and I speak Russian - only my appearance is Korean". For Lena (35 years old, manager) the whole thing is even more complicated: The Far East is a transit zone for her, North Korea is her historic home, she sees herself as a world citizen, a Soviet person and a citizen of Almaty.

Most respondents, however, considered South Korea to be their real home. But you are in no hurry to move there. “I used to want to study there. But then I spoke to people who live in Korea - they had a negative impression. Foreigners ... they are ignored there. They are not talked to. Even if they speak Korean " (Dima, 30, finance worker). South Koreans often consider their "relatives" from the former Soviet Union to be "inferior" Koreans. However, due to its prestige, strong economy and geopolitical status, South Korea is a true guardian of the Korean language and culture - in contrast to the "outlawed" DPRK (Democratic People's Republic of Korea - North Korea), although the ancestors of the Soviet Koreans from the historical territories of the DPRK moved to Primorye.

As it turns out, there is no one hundred percent homeland for Koreans in Kazakhstan. They are turning to South Korea - a country that they appreciate, but which they regard as quasi-foreigners, as foreigners. And Kazakhstan, where they were born and raised? After all, the Koreans are not considered second-class there. In 2016, when the official "Day of Gratitude" was introduced, the country's president said that the Kazakhs had accepted the people abandoned by the Stalinist regime in the steppe as dear guests. But even in this context, the Koreans are politely told that they are guests on Kazakh soil. The road to Primorye may be free, but it is also not particularly attractive. Apparently only the possibility of orienting oneself to one another remains - through personal connections within the diaspora, so Anna's conclusion.

Translated from the Russian by Hannah Riedler

You can find even more Central Asia on our social media channels, take a look at Twitter, Facebook, Telegram, Linkedin or Instagram. For Central Asia, you can also register for our weekly newsletter directly in your mailbox.