How can we make Jowar Roti easy

Environmentally friendly disposable tableware: And for dessert there is a spoon

An Indian company makes edible cutlery from millet. Environmentalists in Germany are not enthusiastic. 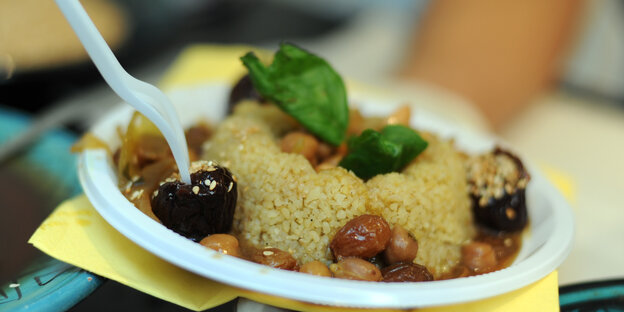 In the future, you could eat a plate full of millet from a millet plate with a millet fork. Photo: dpa

BERLINtaz | It all started on the plane. After a seminar, Narayana Peesapaty sat on the plane from Ahmedabad to Hyderabad and ate a snack that was served - with plastic cutlery, as is customary on many aircraft. Then the idea occurred to him: What if you replaced the environmentally harmful plastic with edible and quickly rotting millet?

Shortly before, on a research trip, the scientist had ordered a jowar roti, a type of flatbread made from millet. "The bread was so hard that I had to break it up and use it like a spatula to eat my curry," says Peesapaty. This created the idea for Peesapaty's company Bakey’s, which has been making edible cutlery from millet since last year.

The desire to work with millet came to Peesapaty earlier. As deputy head of research, he had worked in a market research company in the agricultural industry. He later worked in the field of crop research and dealt with the water table, which is falling dramatically in India.

This is mainly due to agriculture and its high water consumption, explains Peesapaty. In India, grains that require little irrigation have been increasingly being replaced by water-devouring varieties such as rice. “The more rice is grown, the faster the groundwater level sinks.” This is why he wants to encourage Indian farmers to grow more traditional grain again - like millet, which requires little water.

Peesapaty's cutlery is mainly made from sorghum, a type of millet. Then there are rice and wheat. The dough is baked at 200 degrees with the liquid content reduced to less than 2 percent. Preservatives can therefore be dispensed with. It also makes the spoons so hard that you can easily eat soup with them, says Peesapaty.

The advantage: the spoon is completely edible. That is why Peesapaty also offers its cutlery in three flavors: neutral, sweet and spicy. If the cutlery ends up on the street instead of in the stomach, it rots within a few days - unlike plastic cutlery.

Since November 2014, Peesapaty says it has sold one and a half million spoons. You currently have to pay 4 US dollars for 100 spoons. Peesapaty hopes to find international customers for its edible cutlery soon.

Another problem: If you don't feel like eating the hard millet cutlery after eating, food ends up on the street. For this reason, Peesapaty has no plans to make plates or bowls from millet: “First of all, it would be unfair to people's stomachs if they had to eat the whole plate after they had finished eating. They would probably end up in the trash. But since this is food, I don't want to be responsible for any more food waste for ethical reasons, ”Peesapaty clarifies.