What's your favorite breakfast in Egypt

Eating and drinking in Egypt 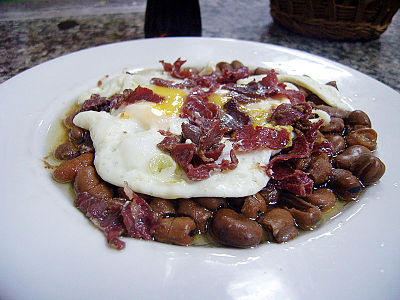 Ful with fried egg and bastirma

Traveling to Egypt is popular - the country can offer culture, beaches, underwater world and much more. However, very few people know the culinary side: many tourists stay in hotels that have often adapted their catering to European customs. On the other hand, the home kitchen of the Egyptians is not very present in public; and when Egyptians go to a restaurant it is to enjoy something unusual.

Grave lord Setau and his wife at the sacrificial table, grave of Setau in el-Kab

It is worthwhile: Egypt is definitely in a position to produce high-quality foods that are also used in local dishes. However, the Egyptian cuisine does not reach the level of one Haute cuisine.

Strictly speaking, there is no Egyptian cuisine. Egypt belonged to the Ottoman Empire between 1517 and 1798. This has also left clear traces in eating habits: today's Egyptian cuisine is predominantly Turkish, supplemented by culinary elements from Palestine, Lebanon, Syria, Greece and from our own past, without completely copying them.

The culinary past can also be studied in the private graves of ancient Egypt. The dishes of the ancient Egyptians included bread, beer, onions, emmer, cattle, fish, game and poultry.

Of course, the development of Egyptian cuisine does not stand still. So it is very popular among the Egyptians to at least imitate the delicacies of other countries with the local means. Noodles, pizzas, french fries and much more have become indispensable in the local kitchen.

On the search for clues

But if you want to go looking for culinary traces, it is not that easy. There are no restaurants with a full range of local beverages and dishes. So you have to keep your eyes open when strolling through the cities and villages in order to get the most comprehensive picture possible.

Meals during the day

There is no such strict division into breakfast, lunch and dinner in Egypt.

A breakfast as such can in principle still be identified. The lunch and dinner tables can be very similar. Those who can afford it and are hungry will put together their dish from a soup, various side dishes (mezze), the main course and one or the other sweet for dessert. The midday meal is eaten between 2 p.m. and 5 p.m., and the communion more or less long after dark. Drinks are of course also served, mostly water. In no case alcohol.

In everyday life, especially among the poorer population, it can happen that lunch and dinner are very similar to breakfast.

There are significant cuts in the daily routine in the fasting month of Ramadan (رمضان, Ramaḍān), in which no meals are taken at all during the day. Breakfast is before daybreak, the second meal, the breaking of the fast, only after dark. This meal can be very generous; so it is not surprising that food prices rise sharply during this time. In addition, tables with food, mostly sweets, are set up in the streets for the poor or for people passing by. Even among Christians there are sometimes very extended periods of fasting in which the consumption of meat is avoided.

In a small group - in the family or in the office - it is quite common to eat by hand just with the right. The left hand is considered unclean and must not touch the food. The Arab flatbread that is always included serves as a replacement for cutlery. After the meal, of course, you wash your hands. As a compromise, sometimes at least spoons are provided. In restaurants, of course, people always eat with cutlery.

Fruits, vegetables and spices in the markets

The range of fruit and vegetables is - at least in the big cities - very rich. Of course, the offer depends more on the seasons than in other European countries. Usually the food is sold in the markets, but there are also grocery stores in the big cities.

Popular types of fruit include:

Some of the fruit is pressed into fresh fruit juices at stalls in the markets. 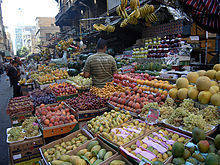 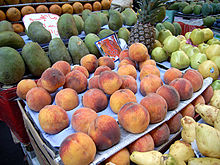 Fruit at the fruit and vegetable bazaar in Cairo 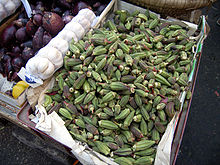 Okra at the fruit and vegetable bazaar in Cairo

Not to be overlooked are the stalls with spices, most of which are sold straight out of the sacks. As a rule, these are the seeds of the plants mentioned that are used for seasoning. The spices offered include:

Spices and vegetables in bags 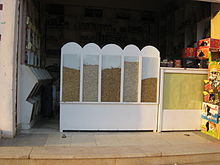 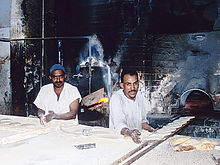 Bread is without a doubt the staple food in Egypt. It is not called Chubs (Arabic: خبس), but ʿAisch baladī (عيش بلدي). The fact that ʿAisch actually means life shows the importance of bread. When food prices rose in Egypt in the spring of 2008, bread also affected, which caused turmoil at the sales outlets for subsidized bread.

The flatbread consists of lightly salted wheat yeast dough that is baked directly on the floor of a stone oven, is one to two centimeters thick and has a diameter of 15 to 20 centimeters. It's hollow inside; when the bread is fresh it looks puffed up. Over time, the loaves collapse. The bread is similar to the Greek one pita bread or the Turkish Pide.

Bread is served with all meals, including celebratory meals. One usually tears off a piece of bread. Since it is hollow on the inside, it is well suited for the inclusion of other foods, so that in principle you could do without cutlery. 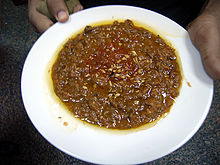 The breakfast (فطور, Fuṭūr) is usually more Spartan than the other two meals. It mostly consists of beans (فول, Ful, spoken with a long “u”), falafel (Ta'miya), mixed salad, sheep's cheese, scrambled eggs, fried eggs or omelets. Bastirma is occasionally used as meat. A breakfast with bread, butter, sausage and / or jam like in Europe is not known in Egyptian cuisine.

The national dish in Egypt are the broad beans, namely those cooked and served in oil: Fūl midammis. There are also some variants, including with mashed beans. 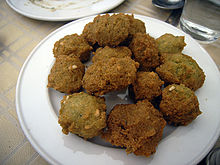 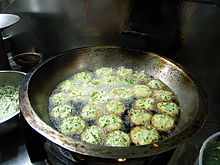 Falafel are baked in oil

Falafel
The ingredients and the peeled and soaked broad beans overnight are chopped up and mixed together. Mixing can be done in a meat grinder, for example.Other ingredients, based on 300 grams of beans, include: two to three onions, half a cup each of parsley, chives, dill and coriander leaves, garlic and salt to taste, a teaspoon of cumin, half a teaspoon of chili or cayenne pepper and a teaspoon of baking soda. The mixture is left to stand for about an hour. Now you shape the balls either round with a diameter of three centimeters or as discs up to about 10 centimeters in diameter. Finally, you can garnish the surface with sesame seeds. The balls are now baked in boiling oil. Falafel are never fried!

Falafel (فلافل, Falāfil) or Ta'miya (طعمية, Ṭaʿmīya). The same thing is hidden behind both terms. The term falafel is mainly used in Alexandria and on the Mediterranean coast, while Ta'miya in Cairo and the Nile Valley. In contrast to other Arab countries, not chickpeas but broad beans are used for their production. Here, too, there are several variants of the popular dish:

Egg dishes are also part of the breakfast. On the one hand, these are:

Occasionally you can also find pancakes for breakfast. 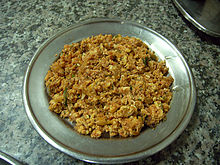 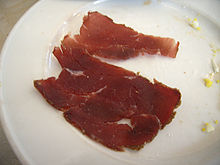 Shakschūka (شكشوكة) is a specialty. It is a scrambled egg mixed with tomatoes and onions. In Alexandria, halved boiled eggs in a tomato and onion sauce are also sold under this name.

Meat and sausage are occasionally used separately or as part of fillings or egg dishes. These are:

For the hunger in between 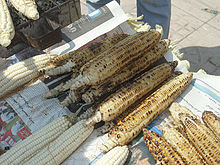 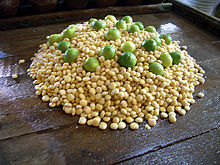 For snacking in between, there are stalls in the markets and on the streets

Starters and side dishes

Starters or side dishes (Hors d'œuvre, Mezze, Arabic: مازة, Māza) are served with all meals. These are mostly salads, boiled eggs, raw liver, pies, peppers, olives, cucumbers, tomatoes and beets. There is no strict separation between starters and side dishes for the main dishes.

Under salads (Arabic: سلطة, Salaṭa) in Egypt one not only includes salads in the real sense, this also includes various sauces (صلصة, Ṣalṣa) and pastes. They are usually eaten with bread. The choice can be very large in good restaurants. At the top of the popularity list are the green cucumber and tomato salad, as well as tahini sauce and baba ghanug. Here are some important sauces and salads:

Tahini sauce
Tahini is made from sesame seeds and is available in grocery stores. It is refined for use as a sauce. Tahini is mixed well with lemon juice and vinegar in a ratio of about 6: 2: 1. In a second vessel, grind cumin (about one sixth of the amount of tahini) with a little salt and a pinch of pepper; if you like, you can also add garlic. This spice mixture is mixed in with the tahini mixture. Finally, dilute the sauce with water in one to one and a half times the amount of tahini and stir until the sauce becomes smooth. Optionally, you can also add parsley and grated onions. 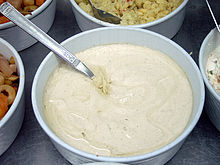 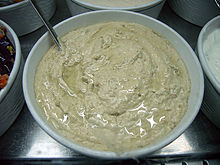 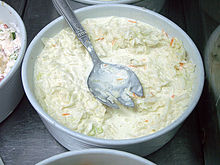 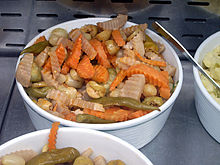 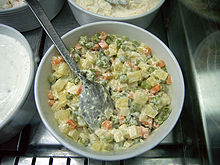 Kolslo
Who to Kolslo (Arabic: كولسلو ، كول سلو, English Cole slaw, Dutch Koolsla) searches on the Internet will quickly be redirected to this page. Therefore, here is the Egyptian recipe: Mix 3 tablespoons of orange juice, 2 tablespoons of vinegar, 4 tablespoons of mayonnaise, 12 teaspoons of sugar, 1/2 teaspoon of salt and a glass or a pack of yogurt. Then add the white cabbage cut into narrow strips (a small head), some iceberg or lettuce leaves cut into pieces and a grated carrot and stir everything until it is well mixed. Keep the salad in the refrigerator until you need it. It takes about a quarter of an hour to prepare.

lentil soup
About 500 g of peeled yellow (or red) lentils, an onion, a tomato and a carrot, of course finely chopped, are added to one liter of water and brought to the boil. Salt and cumin are added while stirring. The soup is then left to cook for 15 minutes. You can add oil or butter and lemon juice to the finished soup. Finally, roasted onions are sprinkled on top of the soup. Sometimes vermicelli is also added to the lentil soup.

Soups are one of the main meals. They are eaten before the meat dishes. The word for soup شوربة, Shūrba or (شربة, Shurba) is derived from the root word Shariba (شرب) for drink off, i.e. they were originally drunk and not eaten with a spoon.

The number one soup is lentil soup, which is made from peeled yellow lentils. The main season for this soup is winter; however, it should be offered in good restaurants all year round.

The following is a list of the most popular soups:

Traditional fast food includes the following dishes in particular, which are very popular among the population: 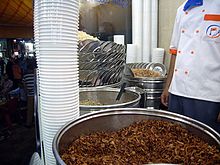 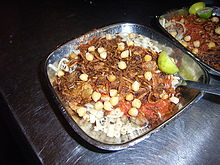 Although also part of meat dishes, there are also individual dishes with rice or noodles. These are, for example:

Main dishes are meat, poultry or fish dishes. They are served with rice, french fries, pasta or couscous and a salad. 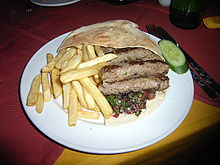 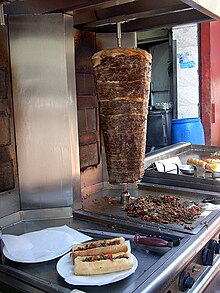 Meat is usually cooked or grilled. It is usually grilled over charcoal. The exceptions are lamb chops and sirloin steaks. Some important examples are given below: