The history and origin of the chopsticks

They can be found in every Japanese, Korean or Chinese restaurant, but for some Westerners they literally cause sweats: the chopsticks (in Japanese hashi 箸). In many countries in East and Southeast Asia, they are the common cutlery used in eating and cooking, including Japan, China, Korea, Vietnam and Taiwan. A billion people use them in their everyday lives, even more than those who eat with a knife and fork. Chopsticks have become so synonymous with these countries that it is hard to imagine eating with anything else, any more than Europeans can imagine not eating with cutlery. After all, it's always been like that, hasn't it?

In the beginning there was the spoon

In fact, people in these countries did not eat with chopsticks from the very beginning: the first eating tool of antiquity was the spoon, as has been proven by archaeological finds. The oldest excavated spoon is said to be up to 8,500 years old.
Like many aspects of Japanese culture and history, chopsticks have their origins in China, but the spoon was predominantly present there too. One reason for this was that over 2000 years ago the main food of the Chinese was a kind of thick cereal porridge, which was easier to eat with a spoon. In a way, there were knives and forks, but they were used exclusively for processing, preparing and cooking food. Finds of chopsticks-like tools that existed over 5000 years ago show that they were also used in cooking. These were mostly long sticks or twigs that were wonderfully suitable for stirring or for picking up individual ingredients from the relatively deep saucepans.

Holding chopsticks correctly: instructions In Japan, maintaining form does not stop at the basic need to eat. Here you can find out the most important dos and don'ts when dealing with ... 04/04/2019 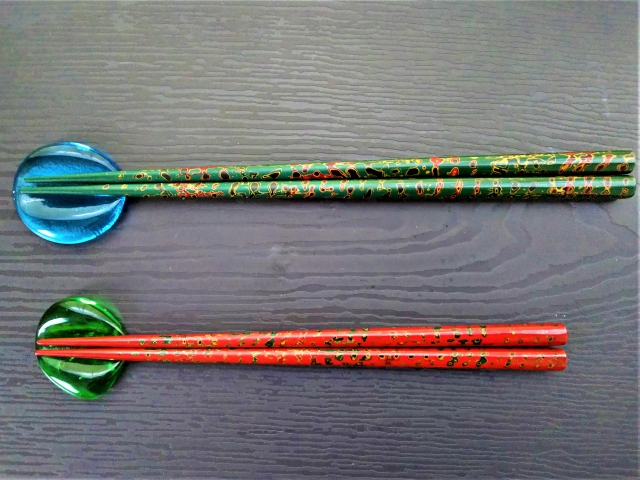 From tools to important everyday objects

So how did these early chopsticks develop into everyday cutlery and replace the spoon? Over time, flour-based foods such as pasta and dumplings grew in popularity among the population, as at some point there were also mills that could process the grain. Chopsticks were more practical than spoons for eating such dishes, and so Chinese cuisine began to adapt to people's preferences. But with the ever increasing population, the need for important raw materials such as firewood grew, and food became scarcer. Approx. 500 BC Chr. One finally went over to cutting the individual dishes into small, bite-sized pieces. This way the food cooked faster and less valuable fuel was used. And what is the best way to pick up small, bite-sized pieces? So knives and spoons at the dining table were superfluous.

Another great influence was the famous Chinese scholar and philosopher Confucius (c. 551 - 479 BC), who was an avowed vegetarian. For him knives at the dining table were considered barbaric; they were too reminiscent of slaughterhouses, war and death.

Most of the chopsticks were made of bamboo or other heat-resistant and tasteless wood. The upper class could even afford chopsticks made of jade, ivory or brass, even if they were considered more of a status symbol. The richest of the rich used silver because they believed the sticks would turn black if they came into contact with poison. That was a misconception, however, because they would discolor even after contact with garlic or onions, for example.

From around 500 AD, the chopsticks from the Middle Kingdom also came to Japan, Vietnam and Korea. The oldest evidence of the use of chopsticks in Japan can be found in the Kojiki ("Record of old incidents", a literary work from 712 that describes the mythology and early history of the country up to around the 6th - 7th centuries). Mostly, however, chopsticks were used for religious ceremonies and were also made of bamboo. The first evidence of chopsticks used for eating can be traced back to the 10th century AD.

A traditional Japanese menu consists of several individual dishes served at the same time. They will be placed according to fixed ... 06/26/2019

Chopsticks do not always look identical, they have different lengths and shapes depending on the country.

One theory, why Chinese chopsticks are longer than in other countries, says that people began to eat at the dining table from around the 10th century. Not everyone had their own plate in front of their nose, but there were many smaller dishes on the table, from which everyone could help themselves. In order to have easy access to the plates, the chopsticks were correspondingly longer.

You are sure to have a look at the simple disposable chopsticks that are available in many Japanese and Chinese restaurants. These are called in Japanese waribashi, simple sticks made of wood with a gap up to the middle for the (more or less) easy breaking apart. The first waribashi were made in Japan in 1878, but nowadays 24 billion of them are consumed annually - twice as much in China. But the trend is towards sustainability: Most of the time, every family member has their own personal pair of chopsticks that are reused. There are even some that can be unscrewed in the middle for easier transport on the go.

Modern chopsticks are available in countless designs, colors, materials and price ranges. Special chopsticks for New Years are called iwaibashi, and so-called saibashi, very long and thick chopsticks, are still used in cooking today. There are even special chopsticks with holding aids to teach children how to use them properly.