Sword fighting, sword fencing and feather fencing can be used synonymously as terms and describe fencing according to the German school. The German fencing school is based on the use of three weapons: dagger, dussack and hand and a half sword. 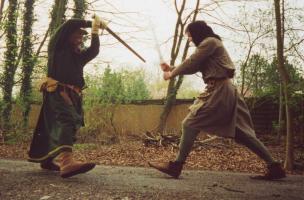 This homepage can only represent an introduction and does not claim to provide a comprehensive picture. Anyone who makes this claim disregards the fact that sword fencing has always been strongly regional. As a result, fencing varied from region to region and from family to family. Another big problem is that at the wedding of the German fencing school the ability to write was not widespread. In addition, parchment was expensive and monasteries where the know-how and material was available viewed fencing more from the point of view of judicial fencing and the related divine judgments. For this reason, written records are rare and often incomplete. If you look at z. If, for example, Talhoffer's fencing books (from 1443, 1459 and 1467) are used, it becomes clear how difficult a reconstruction is. These books usually show at most one starting position and one ending position or just one ending position. Under these conditions, you need prior knowledge (Italian, French, English ... school) in order to be able to convert the illustrations and instructions into meaningful sequences of movements. I would like to point out a possible reconstruction based on several courses with a Slovak, a Czech and an American fencing master. Since I myself have the status of an advanced fencing student, I would like to limit myself to describing the basics of sword fencing. The terms used for individual techniques are and were very different from region to region. Accordingly, some techniques may be very familiar to fencing experts under other names. Attention: You carry out the described techniques at your own risk!
Warning: a battle-ready sword is potentially a weapon! Sharp weapons are unsuitable for exhibition combat (do not use them!).
1) The logic of the armament - who was equipped and how? 2) The basic techniques for the sword 3) Some masterful techniques 4) Exhibition combat: How not to kill each other - and still make it look like this 5) Fencing for life and death - different strategies .6) The use of dagger and dussack. 7) Division into different sword types - which sword for whom? 8) The meaning and purpose of a fencing school.