Why do people have binocular vision

Binocular depth criteria are based on the fact that we have two eyes. 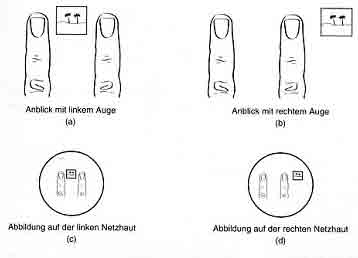 Since our eyes are up to 6.5 cm apart, we see slightly different images with our two eyes. This phenomenon is called binocular disparity or Lateral disparity. From the differences between the two retinal images, our brain can calculate how far away different objects are. 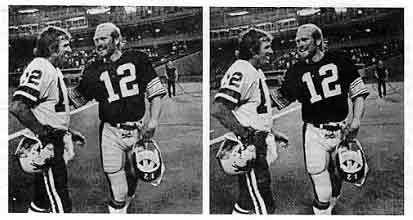 Look carefully at the two pictures. They look the same at first glance, but at second glance you can see that the relationship between the foreground and background is different in the two images. The left image corresponds to the left eye, the right image to the right eye.

We want to consider a little more precisely what the principle of transverse disparity is actually based on. The small figure shows corresponding points on the two retinas. To find these points, imagine putting one retina over the other. 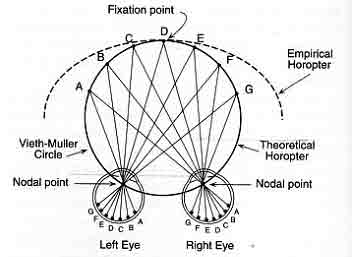 There is an imaginary line on which all points lie, which are projected onto corresponding points on the retina. This imaginary line is called a horopter. Theoretically, the horopter is a circle that runs through the nodal points of both eyes and the fixation point D: the so-called Vieth-Muller circle. The actual, empirically observable horopter is shown in dashed lines; it is slightly behind the theoretical horopter. 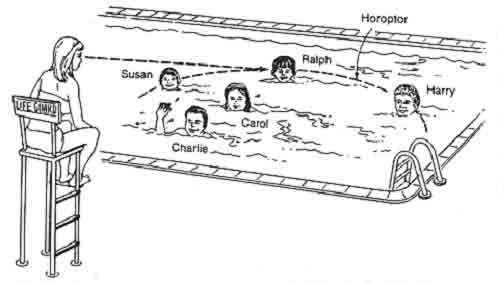 You can see it again in the picture with the swimming master: all points on the horopter fall on corresponding points on the retina. 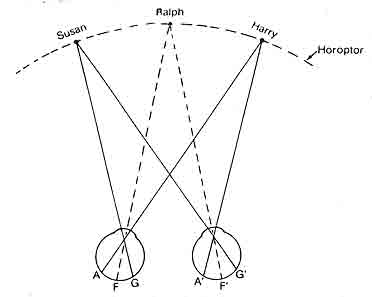 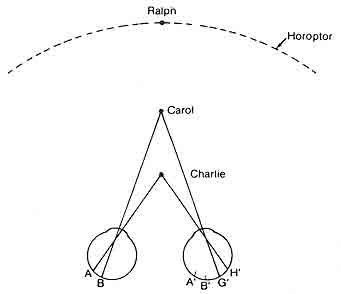 The further away the object is from the horopter, the greater the lateral disparity angle. 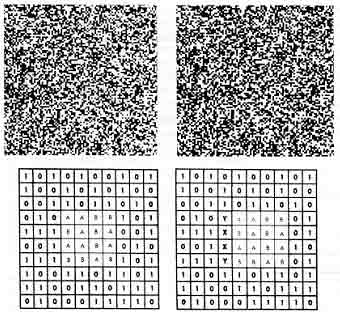 A random stereogram. Below: the construction principle of the random sterogram.

Experience is likely to play a more important role in higher living beings. The determination of the experience effect e.g. through procedures of controlled rearing (e.g. in total darkness)

The role of experience was examined with the method of the “visual cliff” according to Eleanor Gibson (cf. Walk & Gibson, 1961). It works like this: if the test organism reliably goes from the starting point to the flat side and avoids the deep side, it is assumed that depth perception occurs.

For many animals and also for small children, depth perception has been proven. (The turtles are an exception.) It is believed that there is a "sensitive period" for the development of the depth criteria. If the organism is deprived of a certain type of visual experience during this sensitive period, severe deficits will result.

In infants, binocular depth criteria can be demonstrated as early as 2-5 months of age. 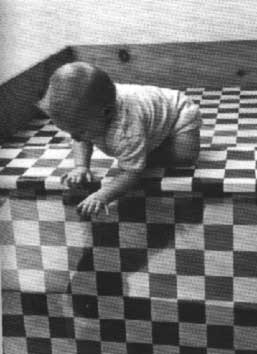