What are the causes of cardiac arrhythmias

Cardiac arrhythmias are in most cases harmless extra blows without disease value. Both a slowing down of the heart rate (bradycardia) and a speeding up of the heart rate (tachycardia) can also become life threatening. Almost everyone is affected by cardiac arrhythmias in the course of their life. These can be harmless or dangerous. Often they are only subjectively uncomfortable (“stumbling heart”) and do not require treatment. But they can also lead to dangerous incidents and sequelae.

Definition and types of arrhythmias

The normal heart rate is at 50 to 100 beats per minute. The heart rate is usually slightly higher in young women than in men, presumably because men lose their resting frequency with frequent exercise. A heart rate <50 / min is called slowed down (bradycardia), a frequency> 100 / min at rest than to fast (tachycardia). Both forms of cardiac arrhythmia can be life-threatening. They usually occur as a result of a severe, structural heart disease, e.g. in

Bradycardia arrhythmias can manifest themselves through these symptoms:

After a thorough investigation, in many cases the most effective treatment is the Pacemaker therapy. Over 200,000 people in Germany wear a pacemaker. The actual device with the battery is hardly the size of a matchbox and is usually implanted under the skin in the area between the chest and shoulder joint - hardly recognizable from the outside. It is connected to the heart via probes, where it emits its impulses depending on the programming. Severe bradycardias are then no longer possible.

Many patients have lived with a pacemaker for decades. Due to the gradual decrease in battery energy, the device must be replaced after 5 to 20 years. Regular checks at the heart specialist are necessary. 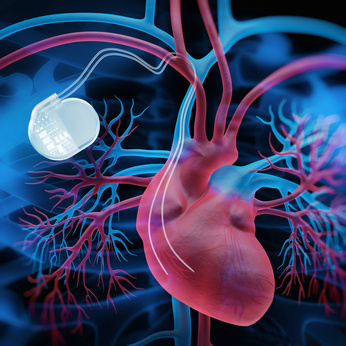 A pacemaker is located above the heart © psdesign1 / Fotolia

Atrial fibrillation reduces the cardiac output (the blood that the heart transports in one minute) by approx. 15-20%. The heart can now take blood no longer on their own pump into the ventricles. It has protective mechanisms so that the very rapid beat frequency of the atria is not transferred to the ventricles. Nevertheless, atrial fibrillation often results in tachycardia. Uncoordinated actions of the atria lead to functional blood stasis (Hemostasis), which can eventually lead to blood clot formation. These blood clots can be carried to organs such as the brain and cause a stroke. These patients usually have to be permanent blood thinning drugs take in.

If the atrial fibrillation has not been around for too long and there is no serious heart disease, it often succeeds restore normal heart contraction. This works best with one Electric shock under short anesthesia. The risk of atrial fibrillation recurring can be reduced with some medications.

Tachycardiac arrhythmias can be treated with medication in individual cases. In the case of life-threatening forms, however, there is an increasing trend towards using a Defibrillators to protect. This device is related to the pacemaker and is implanted in the patient in a similar way. It continuously registers the patient's heart rate and detects dangerous cardiac arrhythmias within seconds. Depending on the programming, it then makes an attempt to go through targeted stimulation (similar to the stimulation of the heartbeat by the pacemaker) to force an end to the dangerous arrhythmia. If this fails, an electric shock is delivered, which terminates the arrhythmia with a high degree of certainty.

The tachyarrhythmias requiring therapy include:

The normal excitation of the heart follows a set path so that it becomes one coordinated pumping function of the heart muscles comes. The clock of this controlled excitement is that Sinus nodelocated on the roof of the right atrium. However, there can be a disturbance of the electrical propagation in the heart, which can be caused, for example, by a heart attack. Then a second impulse generator can appear in the heart (arrhythmogenic focus), which can lead to disturbances in the spread of electrical excitation, but also to circulating excitations.

When assessing ventricular arrhythmias, it is always important to assess whether these are signs of underlying heart disease. The examination by a cardiologist provides clarity. Often it is possible to go through the Treatment of the underlying disease to achieve a normalization of the heart rhythm. In order to be able to reliably classify arrhythmias, an EKG at the time of the arrhythmia is necessary. Therefore, if a patient suffers from cardiac arrhythmias, they should go to the family doctor immediately in order to obtain documentation. But even if the ventricular arrhythmias persist, effective treatment methods (e.g. implantable defibrillators) are available today.

Cardiac arrhythmias can be caused by a variety of factors:

Particular attention should be paid to electrolyte disorders (e.g. hypo- and hyperkalaemia). Recently, psychogenic causes (depression) in connection with the occurrence of ventricular arrhythmias have also been discussed.

Organic changes such as heart valve defects, CHD, heart muscle inflammation or degenerative diseases of the heart can cause cardiac arrhythmias. There are also causes outside of the heart, such as

The most common rhythm disturbance in adults, the Atrial fibrillation, arterial hypertension (high blood pressure) and CHD play a role. A heart attack can lead to dangerous arrhythmias. Harmless arrhythmias, such as emotionally caused disorders of the heartbeat sequence, do not require any special treatment.

In general, the doctor can clarify whether there is a disease value or not through a targeted questioning, physical examination and an electrocardiogram (EKG). If in doubt, the Ultrasound examination of the heart is used to reveal structural abnormalities.

The Pulse analysis is still an essential diagnostic tool. The analysis is accompanied by sensations such as complaints of a rapid heartbeat or a slow pulse, heart stumbling or anginal complaints. A suspected cardiac arrhythmia always leads to the creation of an EKG. This is able to identify the vast majority of cardiac arrhythmias. Today there are expanded options such as the stress ECG, the tele-ECG, the long-term ECG and the standing ECG. If the surface leads do not continue with the ECG, there are also intracardiac stimulation and lead options.

The spectrum of therapeutic options is diverse:

It all starts with the clinical symptoms that lead the patient to the doctor. The question then arises: is there an arrhythmia at all? Anamnestic information and clinical signs must therefore be correlated with cardiac arrhythmias as the presumed cause. The Therapy of cardiac arrhythmias - in the clinic as well as in the practice - is divided into:

The causal treatment must naturally focus on the Cause of illness be aligned. Depending on the case, the treatments can look different:

In the case of threatening arrhythmias, however, it is often important to acutely, i.e. symptomatically, eliminate the arrhythmia, which is primarily done medicinal and, if necessary, electrical measures come into question.

In addition to the causal, general and medicinal treatment of cardiac arrhythmias, electrotherapeutic measures are now firmly established — especially in emergency medicine. This applies to pacemaker therapy in the event of a critical reduction in frequency as well as to

From a medical point of view, cardiac arrhythmias require treatment if they cause symptoms or if they are dangerous. The former include the disorders that the Quality of life of patients limit, such as palpitations, slow heartbeats or angina pectoris symptoms.

The dangerous arrhythmias are to be treated regardless of the subjective condition of the patient in order to prevent serious illnesses.

Pacemakers can be used in disease-related bradycardias. These include

Myocardial infarction and Adams-Stokes attacks can also lead to threatening bradycardias. Today there are also pacemaker systems for tachycardias and for preventive stimulation with atrial fibrillation. Ventricular pacemakers for existing conduction disorders and cardiac insufficiency with unsuccessful treatment are completely new.

In the case of major air routes, the aircraft are equipped with defibrillators that laypeople can operate. Basically, the use of defibrillators is appropriate trained personnel to advocate. Such training is also recommended for relatives of endangered patients so that they can save lives in an emergency.

Cardiac arrhythmias can be tackled with the sodium antagonists of the so-called Vaughan-Williams Classification I. These include quinidine, ajmaline (class IA), lidocaine and mexiletine (class IB) or flecainide and propafenone (class IC). The prerequisite is that there is no structural heart disease.

Class II, the beta receptor blockers, can be used well because there are few side effects, especially for CHD and adrenaline-related arrhythmias.

The repolarization extenders amiodarone and sotalol belong to class III. These drugs can also be used for structural heart disease.

Class IV includes calcium antagonists with antiarrhythmic potency, especially verapamil and diltiazem, which are only useful for supraventricular cardiac arrhythmias.

In addition to the drug treatment of cardiac arrhythmias or pacemaker therapy, the surgical intervention help in the conduction system of the heart with cardiac arrhythmias. The normal heartbeat is characterized by an uninterrupted sequence of electrical impulses, which alternately cause a build-up of excitation and a decrease in excitation and thus a regular heartbeat. The impulses have their origin in the sinus node, the "impulse generator" of the heart.

A relatively new concept for the therapy of cardiac arrhythmias - in addition to drug treatment or pacemaker therapy - is offered by the surgical intervention in the conduction system of the heart. However, this intervention is only to be carried out in connection with an already planned and necessary heart operation, as it requires the use of the heart-lung machine, i.e. cardiac arrest.

The principle of this operation is to cut the conduction pathways running in the heart, which maintain the atrial fibrillation, in order to restore a regular, orderly heart rhythm. The surgeon makes labyrinth-like incisions in both atria of the heart, from which this operation takes its name: Maze = labyrinth. The Maze operation has one with the restoration of sinus rhythm Success rate of over 90%so that dangerous blood clots caused by atrial fibrillation can be prevented. This means that anti-coagulant and rhythm-stabilizing drugs can also be discontinued. The cardiac output increases again.