What are the divisions of Alphabet Inc.

Current structure of Alphabet Inc .: The parent holding of Google consists of these subsidiaries

On August 10th of last year, Google founder Larry Page unexpectedly announced the establishment of a new holding company in which Google will become an independent subsidiary. The aim of the new Alphabet Holding was to clean up Google's ever-escalating business on the one hand, and lay a foundation for further expansion on the other, which primarily relies on Moonshot projects. A brief overview of the current structure of Alphabet Inc.

When the major restructuring was announced, the new company was skimpy on details, and that hasn't changed much so far. On the website abc.xyz there is only the opening letter “G is for Google” from Larry Page and the year “2015” in the footer of the page - you won't find any information about the structure of the holding there. Since the renovation was officially completed in mid-October 2015, more information could be provided here.

The following graphic from Wikipedia shows the current structure of the company very nicely. Alphabet currently only consists of former subsidiaries of Google Inc. or their established departments. A new company within the holding company has not yet been created, and we have not yet heard of the larger takeovers that have already been announced. At the end of the restructuring, Eric Schmidt announced that the holding company will soon consist of many more companies - but without going into great detail. 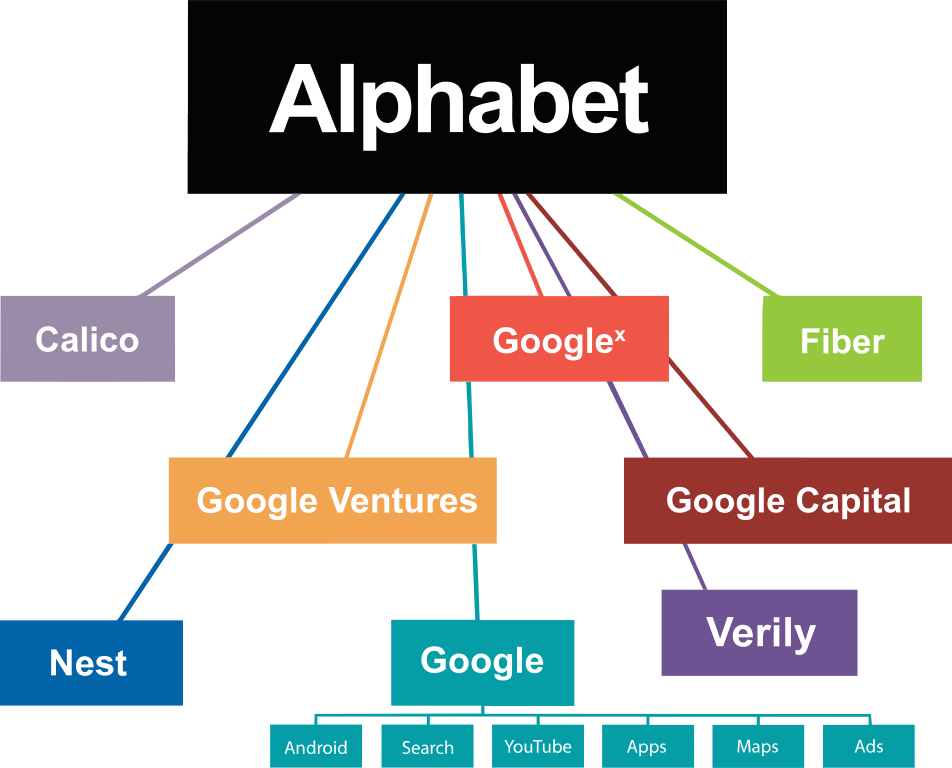 There were only two major changes between the founding of Alphabet and today's date: The Life Science division became Verily and the incubator for new Moonshot projects, Google X, simply became X - which shows the independence from the company “Google” should. If you stay true to the somewhat strange concept of Alphabet that every subsidiary has a different first letter, the renaming of “Google Capital” and “Google Ventures” is due in the near future. The classic Google companies such as Android or YouTube are likely to remain under the umbrella of Google.

The current structure of Alphabet is now clear, but the actual purpose behind it isn't really. As things stand at the moment, it makes little sense to separate the Internet access business Fiber from Google as an Internet company. This is exactly how it looks with Nest, which actually fits exactly into Google's activities. The distinction between Calico and Verily is clear according to the objective, but does not make much sense in practice. While Calico is researching eternal life, Verily is practically the Moonshot department in the field of health and body technology.

In the future, the establishment of a self-driving car company is likely to be pending, but this is also being delayed externally. Apparently, the renovation work has only been completed externally, as no further information from the alphabet universe has yet been published. In just under two weeks, the company will announce its quarterly figures, and for the first time it will be broken down exactly which company generates and costs how much. And here probably only “Google” should make a profit and continue to finance all other projects.