How authoritative is the American government

The elections in the USA confirm: Donald Trump did not become president in 2016 because Hillary Clinton was the wrong candidate. He represents a propensity for authoritarian populism that is more widespread in America than many previously thought. This problem will shape the country for a long time to come. 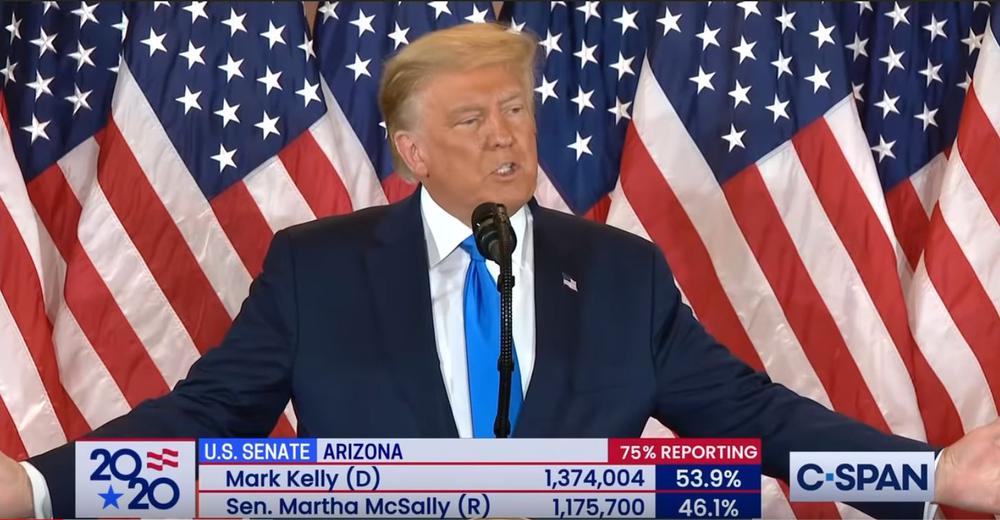 Donald Trump declares himself the winner, although the votes are far from being counted. His contempt for democracy knows no bounds. DGB / dah / screenshot

Anyone who previously thought that the USA would be very different from Hungary or Poland was wrong. According to the latest counts, over 66 million Americans have voted for a liar, racist and macho who thinks little of democracy. On the evening of the election, he declared himself the election winner - as anticipated - and announced that he would have the further counting of postal votes prohibited by a court. Whether he can do this is questionable, but the attempt alone is hugely damaging to democracy in the United States.

Trump's electorate doesn't care that he admires autocrats. On the contrary, they like it

Trump's voters accept that. After all, you did not vote for an unknown outsider, but for the president who has been in office for four years. For a man who would rather rule with presidential decrees than with laws that have to be laboriously negotiated with Congress. For a man who would rather talk to autocrats like Vladimir Putin or Kim Jong-un, whom he admires, than to the democratically elected heads of state and government of the allied states. For a man who cuts taxes for the rich instead of relieving the middle and lower classes. For a man who lets a pandemic rage, to which many people fall victim, instead of taking decisive measures to protect the health of the citizens.

Obviously, none of this matters to almost half of Americans. They admire his demeanor as a strong man who does not stick to conventions and rules. In a way, this is the return of the Wild West, when in many cases there were no laws or they were difficult to enforce. Trump acts like a western hero who says: I am the law. Just let me do it. And in return I'll let you do it, as long as you don't get in my way.

In other words, in social science terms: Trump embodies the US variant of authoritarian populism. This populism is anti-liberal, anti-pluralistic and anti-multilateral. It is anti-liberal because it puts the supposed majority culture and majority opinion above individual and minority rights. It is no coincidence that Trump, like his Polish and Hungarian counterparts, began the institutional demolition work in the courts - and is now relying on the chief judges he has appointed in the electoral process. It is anti-plural because it only defends the rights of one group in society: those of white rural society. And Trump is anti-multilateral because he puts national sovereignty against international institutions even if his nationalism has negative consequences for allies or if former allies like the Kurds are surrendering to their enemies.

Even if Joe Biden narrowly wins, he would not be able to overcome the division in US society - and would have a weak mandate for his reform agenda. DGB / Archive

Political scientist Michael Zürn described the consequences of authoritarian populism with regard to Hungary and Poland as follows: "If, however, authoritarian populists in power in the name of a partially imagined majority restrict basic rights and the third power, then established liberal democracies also falter. If such governments not only verbally question the regional integration network, but also pay homage to free-riding in practice, then a supranational system of institutions such as the EU threatens to fall apart - and if then at the international level even the availability of global goods in general is denied, the liberal world order is facing the abyss. These three dangers are mutually reinforcing. "

Even if Trump loses, his populist authoritarianism will remain

But we are not only talking about relatively small European states. We are talking about the most important and powerful great power on earth so far. If authoritarian populism takes hold here even more than Trump has so far, i.e. if he should be re-elected, the consequences for the USA, but also the global consequences, are hardly foreseeable. One thing is clear: In the USA, social conflicts will intensify dramatically, and the confrontation between Republicans and Democrats will in many cases prevent reasonable governance. Internationally, the classic alliances may break apart - initially at the expense of Europe, which has to rearrange itself - and a cold war with China is likely to bring unexpected dangers with it.

Maybe it won't turn out that way. But: the mere fact that Trump received so many votes - more than any Republican before him - testifies to a hitherto unrecognized tendency towards authoritarianism, which has not disappeared if the president narrowly defeated. In America an anti-statism is revealed, as it is well known from many right-wing populist parties in Europe. In Italy he once bestowed several terms of office on Silvio Berlusconi and, in his successor, Matteo Salvini briefly took over government with his Lega. Just as right-wing populism has not disappeared in Europe, it will not disappear in the USA. Trump may go, authoritarian Trumpism will remain.