America is a melting pot of Europeans

There is a multitude of ethnic groups, primarily as a result of the various waves of immigration over the last few centuries, who live largely peacefully with one another. It goes without saying that there have been mixtures over the decades - this is what defines the cultural diversity and uniqueness of this fascinating country and its population. Xenophobia is unknown, as a large part of the population usually descends from immigrants themselves.

Curiously enough, many of the customs and traditions of the immigrant families still persist. This can often be seen in traditional markets: Christmas market, Christmas bazaar or many St. Patrick's Day parades for Irish immigrants. There are also often references to the previous residents in street names or towns. Germantown, Little Italy, Chinatown, Moscow, St. Petersburg etc. 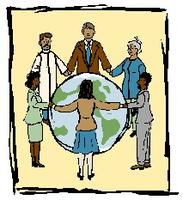 In the United States, about 23% of all Americans are descended from Germans, that's about 46 million people. So don't be surprised if they ask you where you are from. It happens all the time, and people are kindly interested. Most of the time you pull an uncle, grandma, grandpa etc. out of your hat who come from Germany.

A statistic of the Center for ImmigrationCIS According to the United States, approximately 33.1 million people were born in another country. This corresponds to about 11.5% of the population.

In the meantime the fear of an "infiltration" of the USA is circulating, especially by Mexican immigrants. In the last two years in particular, illegal immigration from the neighboring country to the south has increased sharply. President Bush has now given his approval to the construction of a 700-kilometer fence on the Mexican border, which is intended to curb the previously rather unbridled border crossing. According to media reports, thousands of illegal immigrants cross the border towards the USA every day.

Another point on this topic is how to deal with the black part of the population. Politically correct, this is called "African American" here in the USA. Often they are still largely marginalized and largely live among themselves. There is hardly any black population in the finer residential areas. In the slum areas, however, they are vastly outnumbered.

Anyone who saw the pictures after Hurricane Kathrina in September 2005 no longer needs an explanation. Almost all of the affected, non-evacuated population were members of the black or Latino faction. As a European one is a little shocked to be confronted with this (at least subliminally still strong) racism. Officially everyone will deny it, unofficially it probably still exists. Further information on the subject is available on the homepage of the US Census Bureau at: www.census.gov

This article is an excerpt from Live and work in the U.S.

Did this article help you?

do you have feedback, an update or a question about this topic? Comment here: