What has ASEAN achieved 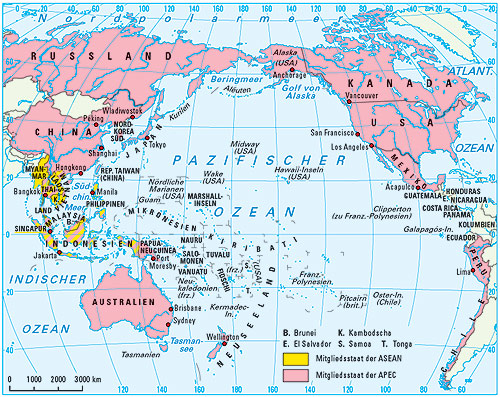 The ASEAN (Association of Southeast Asian Nations) is an association of Southeast Asian countries. The aim of the organization is to improve regional cooperation in the areas of economy, social affairs and culture. It now consists of 10 states and was founded on August 8, 1967 in Bangkok. Members are Thailand, Malaysia, Indonesia, the Philippines, Singapore (founding members), Brunei (since 1984), Vietnam (since 1995), Laos and Myanmar (since 1997) and Cambodia (since 1999). Papua New Guinea and East Timor have observer status. The Bangkok Declaration calls for joint efforts by all ASEAN countries to increase economic growth, social progress and cultural development. The development of the region should be based on peaceful coexistence and mutual respect through the establishment of ASEAN. The possibility of forming a political alliance was deliberately kept open at the time.

The summit conference of heads of state and government is responsible for leading ASEAN and making the most important decisions. Since 1992 these meetings have taken place every three years. The foreign ministers of the ASEAN countries meet annually for a ministerial meeting and decide on day-to-day political affairs. The Standing Committee also meets three to five times a year. This consists of the host foreign minister and the ambassadors of the other states. Specific decisions in the fields of industry, mining and energy, trade and tourism, nutrition, agriculture and forestry, finance and banking, transport and communication, social development, culture and information, and science and technology are made through specialist ministerial conferences. Specialized committees, supported by numerous sub-committees and expert groups, work to prepare these conferences. ASEAN's permanent secretariat has been based in Jakarta, Indonesia, since 1976. It coordinates the work of ASEAN, and its Secretary General changes every three years.

The background to the establishment of ASEAN is the end of the colonial period in Southeast Asia after the end of the Second World War. In the colonial times there was hardly any contact between the countries in the region, and the governments were mostly disorganized and powerless. Small regional agreements such as the ASA and MAPHILINDO did not emerge until the 1960s. In 1967, under the influence of the Vietnam War, the Bangkok Declaration was signed, primarily to stabilize and pacify the region. In the 1970s and 1980s, the first economic partnerships emerged, e. B. a customs agreement. After the end of the Vietnam War, the beginning economic growth enabled further economic cooperation and increased regional trade. In 1976, at their first summit, the members committed themselves to creating a zone of peace, freedom and neutrality (ZOPFAN). Furthermore, the members guaranteed mutual respect for independence, sovereignty and equality, territorial integrity and national identity. In 1977, the first customs agreement was drawn up, which reduced tariffs by 25 to 50 percent for over 15,000 products. At the third summit conference in Manila in 1987, after the end of the Cambodia war, further growth of ASEAN became apparent. In 1995 the ASEAN states and the observers from Cambodia, Myanmar and Laos signed a treaty on the Southeast Asian Nuclear Weapons Free Zone (SEANWFZ). In 1999, an agreement was reached between ASEAN, Australia and New Zealand on the expansion of the free trade area; this is to come into force by 2010. In the same year, an agreement was reached with Japan, China and South Korea on closer political and economic cooperation.
In September 2009, the heads of state and government of the ASEAN members decided to found a common economic area based on the European model.
A free trade area was set up with China in 2010, and another with Japan and Korea is to follow. With Australia and New Zealand, trade barriers are to be significantly dismantled by 2016 through a free trade agreement.

Today ASEAN is one of the most successful organizations in the world after the EU. More than 591 million people live in its area (as of 2011), and it represents one of the most important economic growth regions on earth. The volume of trade between the EU and ASEAN alone has quintupled since 1980. The ASEAN initiatives began to have an impact soon after they were enacted. In 1994 trade grew by 43 percent compared to the previous year. Since 1994 the organization has been working in the ASEAN Regional Forum (ARF) with the EU, Russia, China and the USA. The aim of the forum is "preventive diplomacy" to reduce conflicts in the Asia-Pacific region. Every 18 months, an ASEAN-EU ministerial meeting takes place in Brussels, at which the framework conditions for economic cooperation are determined. Furthermore, Europe-Asia summits take place irregularly, which are supposed to positively influence the economic and political cooperation between the two largest economic centers of the world under the influence of globalization.

The ASEAN region experienced a severe setback from 1997 with the so-called "Asian crisis". The extremely positive economic development in the 1990s caused enormous capital inflows from abroad (around 100 billion US dollars in 1996 alone). Most of the capital went as loans to regional banks. Many foreign investors were convinced of the region's sustained economic growth and had invested well over US $ 350 billion there by the end of 1996. When the exaggerated expectations were not confirmed quickly enough, speculators began to sell the Thai baht in large quantities, the exchange rate of which was subsequently released in mid-1997. As a result, Malaysia, Indonesia and the Philippines also had to release their exchange rates. This was followed by a complicated chain reaction of panic selling, financial flight, uncoordinated currency devaluations and questionable economic policies. As a result, prices, currencies and stocks continued to fall and the region was quickly withdrawn from a large part of its capital. The ASEAN countries fell several places in the ranking of EU trading partners. As of late 1997, the International Monetary Fund paid over US $ 115 billion to stabilize the region. Nevertheless, numerous banks had to close. The structural deficits and simmering social conflicts in the region have come to light once again as a result of the Asian crisis and are now hindering the consolidation and return of ASEAN to the top of the world economy. The consequence is large-scale restructuring of the financial and economic system in order to achieve this goal. The Asian crisis is seen today as a lesson in the power of global capital and the dangers of speculative transactions.
The main problem for integration is the diversity of the member states in terms of economy, culture and form of government.

Back to the terrace
<?