The G-DRG system, with all associated components, stands for the reimbursement of operating costs in the hospital. The reimbursement takes place via intrabudgetary prospectively agreed budgets, which consist of G-DRGs (German Diagnosis Related Groups) and additional fees. In addition to this intrabudgetary reimbursement, further extrabudgetary income is available through z. B. NUB fees (new examination and treatment methods) or optional services possible.

The G-DRG system has now been relieved of an essential aspect of operating costs. The "care in bed" was removed in a very complex process. Now it operates under the name "aG-DRG system "! The "a" stands for "outsourced".

In accordance with the Nursing Personnel Strengthening Act (PpSG), bedside care was taken out of funding through G-DRGs. From 2020, reimbursement will be made via a care budget based on the self-cost coverage principle.

The aG-DRG system replaced the previously applicable G-DRG system on January 1st, 2020. This comprehensive cut in the previous remuneration of the operating costs of the hospitals is based on the Nursing Personnel Strengthening Act (PpSG) of December 11, 2018. For 2020, the flat rate catalog has been expanded to include the nursing income catalog. Compared to the G-DRG catalog 2019, the grouping algorithm has not been changed. The main noticeable change lies in the now significantly reduced level of the valuation ratio (relative weight) of the "remaining DRGs". This results from the outsourcing of the nursing staff costs, more precisely the “care in bed”.

The outsourcing of care and the now separate remuneration via the care budget serves the purpose of ensuring that the service remuneration for care will in future be made directly and no longer via the flat-rate remuneration via G-DRG and ZE. This necessity arose from the misuse of these funds for years. This is due to the inadequate fulfillment of the obligation of the federal states to adequately finance investment costs and the increasing privatization of clinics. Profits were generated in particular at the expense of maintenance in order to make own investments, independent of the subsidies of the federal states and / or to make distributions to shareholders.

Commissioned by the legislature, the joint self-government had until January 31, 2019 to determine a clear, uniform national definition of the nursing staff costs to be outsourced. The nursing staff costs to be outsourced should be agreed within six weeks, i.e. between mid-December and the end of January. In addition, rules should also be laid down for the allocation of costs for nursing staff who are mainly active in direct patient care on wards with beds. This agreement is called "Nursing Cost Accrual Agreement" and was published on February 18, 2019. Building on this agreement, the Institute for the Hospital Remuneration System (InEK) had the task of determining the amount to be outsourced for 2020 on the basis of the 2018 data. This amount amounted to around 15 billion euros.

Problems arose due to the very short time it took to implement it. The term “care at the bed” described in the nursing staff cost accrual agreement, or the procedure for determining what is to be understood by this, was initially not sharpened enough and ensured lively discussions and a significant increase in total expenditure. The calculated outsourced amount of around € 15 billion deviated upwards by ~ € 1.6 billion in 2020. In addition, parts of the care costs initially remained in the aG-DRG system 2020. The necessary adaptation of the CCL matrix could not be implemented to the appropriate extent, which led to double remuneration.

Calculation of the maintenance fee

Since January 1, 2020, each hospital has agreed an individual care budget (expected agreed care staff costs) based on the self-cost recovery principle. This care budget is called up in the course of the year through the care cost income per G-DRG. The point value "nursing income evaluation ratio / day" is listed in the case flat rate catalog from 2020 in a separate column for each main and occupational department as well as for day care.

The nursing fee value serves as a multiplier for the nursing income valuation ratio. This value is to be negotiated on a hospital-by-hospital basis. Until the 2020 care budget was negotiated, a value of € 146.55 was initially set. For the period April 1, 2020 - December 31, 2020, the nursing fee was € 185.00 in accordance with the COVID-19 Hospital Relief Act. In this it was also regulated that the increased amount remains with the hospitals, even if no nursing staff expenses were incurred in the same amount. As of 01/01/2021, the value corresponds to € 163.09. 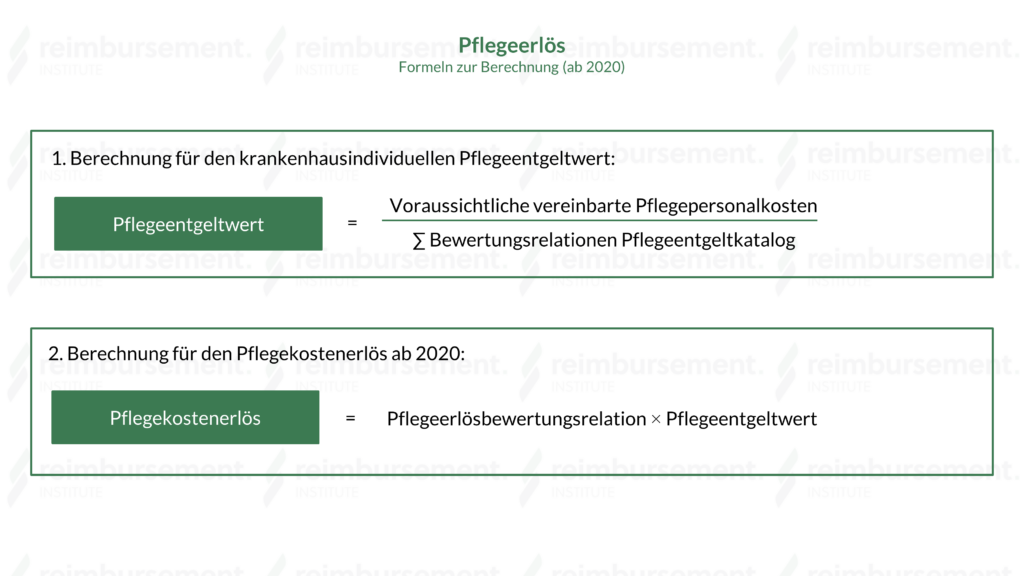 From 2020, bed care will be reimbursed based on the self-cost coverage principle. The calculation examples show how the fee is calculated

Question: What total DRG revenue can the hospital expect in this case?

1. DRG proceeds within the length of stay limits

⇒ € 2,825.98 for operating costs without maintenance from aG-DRG
plus nursing staff remuneration based on the cost recovery principle, i.e. based on actual costs.

2. Calculation of the maintenance fee:

Answer: In this case, the hospital is entitled to proceeds of € 9,355.46. These are to be reimbursed by the cost bearer.

With the outsourcing of nursing staff costs, a total of 32 G-DRGs were deleted. The reason for this lies in the lack of a cost difference in a total of 15 G-DRGs. In addition, 17 other children's DRGs were deleted to avoid being in a worse position. At the same time, 6 new G-DRGs were created for appropriate remuneration. The number of DRGs has thus decreased by 26 DRGs (net) from 1,318 (2019) to 1,292 in 2020. The following year, 2021, again saw a reduction in G-DRGs by 7 to 1,285 case flat rates.

An overview graphic of the number of flat rates per case in Germany since 2003.