Are the Turks hospitable?

Mathias and Annika do the Turkey cliché check

There are kebab stands everywhere in Turkey, all women wear headscarves and the men are all machos anyway ... aren't they? The Instagramers and bloggers Annika and Mathias were in Bodrum for us and took a closer look at a few of the typical clichés. 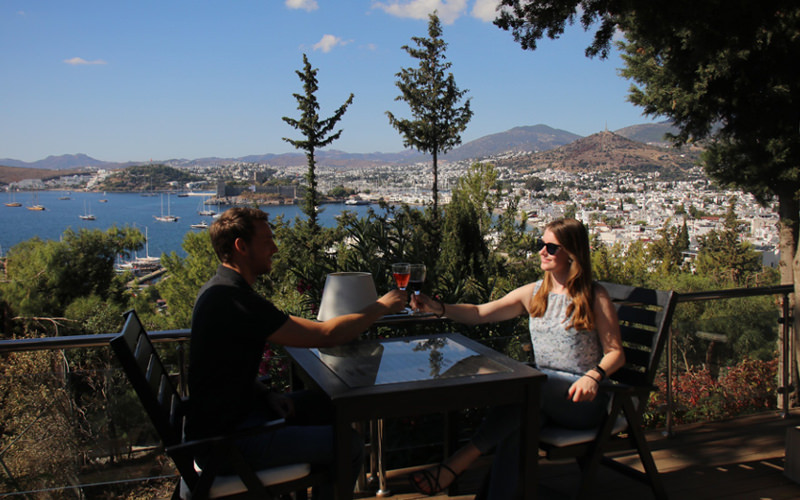 The reaction of friends and family when we announced that we were going to Turkey: "Are you crazy?", "You don't mean that seriously, are you?", "You're crazy ...". We, Annika and Mathias, report on our Instagram channels annistraveljournal and diving.mkoch and our blog dreamteamaroundtheworld.de of travel destinations we visit. We were invited by sonnenklar.tv to take part in the press trip as part of the campaign “60 years of German-Turkish friendship” in Bodrum. And we're honest - we didn't go on the press trip entirely without prejudice. But that was exactly what it was all about - to convince us and the other participants that there was nothing to fear in Turkey. The German media only report negative incidents from this country and it is completely forgotten that this country has so much to offer. This is particularly damaging to the Turks who live from tourism. We have made it our task to take a closer look and uncover prejudices and clichés that are not at all true. We spoke with outside reporter Ali about the differences between Germans and Turks and what both nations think of each other.

Germany and Turkey: The cliché check

Turkey vacation = vacation in the hotel
Many believe a vacation in Turkey means being “locked up” in one of hundreds of all-inclusive hotels lined up in a row. If you want to, you can do it that way, but you don't have to. Bodrum in particular has so much more to offer: boat tours on the Aegean coast, a beautiful harbor promenade with many restaurants and shopping opportunities, many bays, the medieval mausoleum and even a castle. You can enjoy great views of the city and surrounding islands from many places, for example from the windmills.

All men are total macho
Turks have a reputation with us Germans for being very hospitable. That was absolutely confirmed to us. We have seldom received such a warm welcome. On the other hand, we were able to refute other clichés: it is actually not the case that all Turkish men are machos, everyone was very courteous and attentive. Everyone went out of their way to make sure we have a great time in Bodrum.

All women wear a headscarf
The fear of many Germans that all women in Turkey will have to wear a headscarf is absolutely unfounded. On the contrary - we saw fewer headscarves here than at home. This is mainly due to the fact that Bodrum is very western and cosmopolitan. It is also a popular destination for homosexual vacationers because they are all welcome here.

Germans are always punctual, hardworking and like to queue up
Ali, who grew up in Germany and only later moved to Turkey, was also able to notice some differences between the compatriots. While punctuality plays a very important role in Germany, in Turkey you are already on time if you arrive at the meeting point on the right day. In addition, in the eyes of the Turks, Germans are very neat and hard-working. Only at the till, Turks would less like to wait patiently in line, but rather call directly for a second till.

Turks love 3 Series BMWs
As in many other countries, German products are viewed as very high quality. German cars are also very much appreciated. This refutes the cliché that all Turks drive a 3 Series BMW - they generally love German cars.

Turks always drink tea
Tea is absolutely typical and unimaginable without it - regardless of the situation, be it a successful high school diploma or a sad incident - a glass of tea is always drunk first, then people continue to talk.

Turkish food is always delicious
And the food is at least as good as described by clichés - Ali eats nothing better than Turkish dishes. According to Ali, the rumor that the kebab does not come from Turkey is not true either. We were also spoiled with Turkish food during our time in Bodrum and can absolutely confirm that there is always plenty - only the prejudice that garlic is in everywhere is (unfortunately) not true.

Conclusion: We can absolutely recommend Bodrum, there is a lot to see, always good food and you meet friendly people everywhere. In addition, it is absolutely inexpensive compared to places that have a lot less to offer. We will be back with great certainty!

More impressions from Bodrum
You can find more information and experiences from your Bodrum trip with us on her travel blog.