Hou Yifan is from China. She started playing chess when she was five. She is now a grandmaster and has won the women's world championships several times.

At a tournament, a competition, for children

Chess is a board game. It is the most popular game in Europe and is often played in clubs. Over 600 million people play chess in the world.

Chess is also called a sport, a brain teaser. This game is not about luck, but just about cleverly moving the pawns. Everything is also open, so there are no face-down playing cards or the like. It's about mating the opponent's king piece. That means you could beat them on the next move. That is why chess is also called the royal game.

Where does the game come from?

The game was invented as Chaturanga in India over 1400 years ago. At that time, for example, the towers were still called chariots and the king was called Raja. The lady's name was Mantri, that was a wise advisor or minister, and she was only allowed to move one square at a time.

It came to the Arab world via Persia, today's Iran. Our name for the game comes from the Persian language, it translates as "King". As the Arabs conquered large areas around the Mediterranean Sea, they also spread the game.

Thanks to the Arabs, the game became popular in Europe a thousand years ago. But the rules were still changing. Chess has been played roughly the way we know it for about 500 years. Chess became more interesting when, for example, the queen was allowed to be moved as far as desired. That made the game more popular.

Other variants have also been derived from Indian chess. In China there is the Xiangqi, in Japan the Shogi and in Thailand the Makruk. In these variants, the figures look different and move differently.

How is it played? 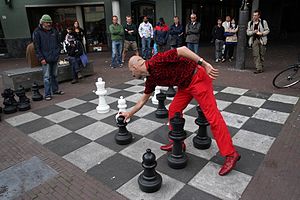 Such a large chess board is also called garden chess or giant chess. This is located on Max-Euwel-Platz in Amsterdam, named after a Dutch world champion. The man with the red trousers is just touching his figure. According to the rules, he must actually move it, he is not allowed to put it down again and move another piece.

In chess, two players play with a board with 64 fields. One player starts with 16 white pieces, the other with 16 black pieces. White can always begin.

The game is played alternately: first the player from white moves one of his white pieces, then the player from black moves a black one, then it is white again to move and so on. If you move your piece onto a space on which there is already an opposing piece, the opposing piece is removed from the board. It is then said that the piece has been defeated.

If a player moves a piece in such a way that he could immediately capture the opponent's king, then they say: chess! The opponent must then try to fend off the chess. He has three options: He moves the king away, he places one of his pieces in the path of the attacker or he captures the attacking piece. If that doesn't work, they say: Matt! The king is lost and with it the whole game.

What characters are there?

The basic position at the beginning of a game. The figures in the bottom row are named from left to right: rook, knight, bishop, king, queen, bishop, knight and rook. The peasants stand in front of them. The fields are named with the numbers and letters: For example, the white king is initially on the e1 field.

Each player has two towers. You can move a tower as many spaces as you want, horizontally or vertically. The two runners play similarly, but always at an angle, i.e. diagonally. One of the bishops always stays on the black fields, the other on the white ones.

The strongest figure is the lady. You can move it like the towers and bishops, i.e. horizontally, vertically and diagonally, and as far as you want. The king can move one square in any direction.

A jumper is first moved one step straight and then one at an angle. Because the possible "landing fields" are almost like a circle around the jumper, one speaks of the jumper's wheel. The knight is the only piece that can jump over other pieces.

After all, a player still has eight pawns. A farmer can only take one step forward and never backward. At the beginning you can, as an exception, take two steps if you want. The pawn can only hit diagonally forward. If a figure is standing in front of him, he will get stuck.

A farmer is considered to be rather weak. But pawns in particular who cover each other can become very important in the game. When a pawn reaches the last row of squares on the edge of the board, the pawn's player may exchange the pawn for a piece of his choice.

How do you win a game?

Here two men are playing chess in Kenya. The clock above is there to prevent players from thinking indefinitely before making a move. Everyone has a certain amount of time in total. When it's your own turn, your time runs out. If you have drawn, you press a button and the opponent's time runs out.

A good player can think about many moves in advance. He goes through in his head which pieces he can move and how and how the opponent would then play. However, there are many possible moves in chess: after every four moves there are trillions of possibilities.

That is why it is important to know some basic strategies. So you try to beat the valuable pieces of your opponent. A queen is most valuable, followed by rooks, bishops, knights and pawns. It is also important where you place your pieces: you would like to threaten fields in the middle of the board.

At the beginning you try to develop your characters quickly. What is meant is: The strong pieces such as queen or bishop are initially behind the row of pawns. If you move the pawn one or two spaces forward in front of the king as your first move, then the pawn threatens spaces in the middle of the board. In addition, the pawn clears the way so that the queen or a runner can then move forward.

The way you begin is called an opening. Many useful ways of playing have been given names depending on where you often played them first. An example of this is the "Sicilian Defense".

How do you play without a second person?

For a while, game computers were built specifically for chess. This Tandy Radio Shack 1650 is from the years after 1980. The computer used light signals to show where to put your figure.

Chess players have always faced the problem of having no partner to play with, or no good player. For example, you played correspondence chess with someone who lived far away. They wrote themselves in letters which move they were playing. There is a certain spelling with the help of the numbers and letters at the edge of the field, with which one simply communicates this.

The chess puzzles are also popular. In such a chess composition, a good player has recorded a certain score. The reader can then consider how the game can be won. Such tasks are found in chess textbooks. They used to be found in daily newspapers.

The first chess computers were invented around 1970. Unlike the Turk playing chess, they can actually play. The computers, or more precisely the programs, got better and better: In 1994 a computer defeated Garry Kasparov, the world champion at the time. Today all good players use a computer to practice.

Who are the really good players?

World champion Magnus Carlsen from Norway is one of the best chess players in the world. At the age of 13 he was allowed to call himself a grandmaster.

There are chess clubs in many places where you can practice and hold competitions. Competitions or tournaments existed centuries ago. The first world champion to be generally recognized was Wilhelm Steinitz. Steinitz has come up with a new way of playing: You should no longer attack in a stormy manner, but rather play according to clever basic rules. So chess should become more scientific.

The Elo rating has been in effect since 1970. It's a way of calculating how good a player is. Whoever has won certain competitions, the number of points increases. Anyone with a high rating is considered better than someone with a lower rating.

Whoever wins often and plays well can become a grandmaster. This is a title awarded by the World Chess Federation FIDE. There are only about 1500 grandmasters in the world.

For a long time chess players talked badly about female players. Even today, almost all of the world's best players are men. But that's only because fewer women play overall.

Can you make money with chess?

This chess teacher from the USA teaches children the game.

If you want to be really good at chess, you have to spend a lot of time: You have to play, practice and learn several hours a day. That's why players thought about how they could make money from their sport in order to be able to afford the time to do it.

This is how good players played for money centuries ago: If you wanted to play against them, you had to pay something. Or a prince or other rich person gave money for a tournament: the winner received prize money.

Prize money is still important today. Many professional players give classes or sell teaching materials, such as videos that teach good chess.

There are also other search results for “Chess” from Blinde Kuh and Ask Finn.

The Klexikon is like a Wikipedia for children and schoolchildren. The most important things explained simply, with definition, many pictures and maps in over 3000 articles. Basic knowledge suitable for children, everything easy to understand and good for presentations in school.
<?