How does a yeast infection feel?

Intestinal fungi: diagnosis is not yet a disease

Access to the specialist information exclusively for members and subscribers is now activated for you.

The discussion about Intestinal fungi has fallen silent a bit in the last few years. Most medical professionals are of the opinion that everyone carries yeasts such as Candida albicans in their intestines, and only the seriously ill would get them. On the other hand, other therapists fear life-threatening diseases even with the mere detection of these germs. 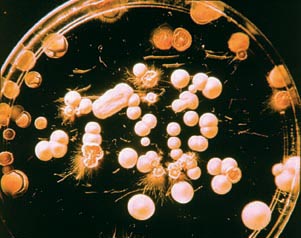 There are symptoms and clinical pictures which, even after years of disputes among experts, do not seem to have a clear meaning. This also includes the "Candida" problem. Especially in the field of naturopathy, some therapists take the view that the detection of a yeast fungus in the intestine may pose a life-threatening danger: the germs could penetrate the mucous membrane, get into internal organs and the patient would die of a generalized fungal infection. Doctors dismiss this view as null and void. They claim that the detection of yeasts is something completely normal, since they are part of the healthy intestinal flora. Therapy based on such a finding is superfluous, unnecessary scaremongering and, above all, bag tailoring for the benefit of the therapist.

Two examples show that both positions overshoot the mark: Thorsten Z., 35 years old, feels very healthy, but would like to have an extensive preventive check-up with a stool examination. There is a moderately increased number of yeasts, otherwise a largely normal finding, and no complaints. Therapy is not required. Kristin G., 28 years old, has been susceptible to infections with sinus infections and tiredness for a long time. The intake of various immune-boosting preparations and vitamins did not result in any change. In the stool there are more yeasts and quite a mess of the intestinal flora, among other things with a reduction in lactic acid and bifidobacteria. An antifungal treatment and thorough intestinal rehabilitation is started and leads to a significant improvement in your general condition.

Increased numbers of yeasts can often be detected in the stool without any particular symptoms. It is hard to imagine that everyone with this finding should be dangerously ill, as some therapists vehemently claimed, especially in the 1990s. Severe general fungal infections with infestation of internal organs are possible, in some cases even with fatal outcome, in patients with immunodeficiencies, for example during chemotherapy or AIDS. For others, however, there is no life-threatening risk. However, a whole range of complaints can very well be triggered or at least favored by yeast fungi. To this day, however, the connections can often not be proven.

Candida has a thousand faces

In addition to itching, hunger for sweetness and changing stool, fungal infections often lead to itchy redness in the anus area. Flatulence and gas formation in the stomach and intestines, which can lead to constriction of the heart and rhythm disturbances (Roemheld's syndrome), are also typical. A chronic susceptibility to infection, particularly chronic sinus infections, as well as exhaustion and tiredness indicate a fungal attack. Many of those affected cannot tolerate alcohol. It is very likely that allergic symptoms such as hay fever, allergic asthma and skin diseases such as neurodermatitis are also favored. This probably happens through toxic metabolic products that are formed by the fungi, absorbed through the intestinal wall and thus get into the tissue.

Just detecting Candida says little, as there are around 155 types of it. These include healthy yeasts such as baker's yeast, kefir mushroom or brewer's yeast, which also occur naturally in the intestinal flora. Typical pathogens, however, are Candida albicans, which is responsible for two thirds of intestinal fungal infections, and Candida glabrata, a type of fungus that is often found in the vaginal area. Differentiation in the laboratory is therefore important.

Yeast fungi are favored by environmental disturbances in the gastrointestinal tract. Antibiotics are at the fore here. Cortisone preparations also favor fungi by inhibiting the development of healthy intestinal bacteria. This also applies to inhalative corticosteroids as part of asthma treatment and to gastric acid blockers. Permanently too much sugar and sweets play an important role in nutrition.

Usually, a microbiological stool examination in the laboratory searches for yeasts. A negative result does not rule out a yeast infestation, as the fungi are very unevenly distributed over the stool. Only the positive result provides the proof. The probability of detection can be increased if apple cider vinegar is drunk for a few days before the stool sample (a shot glass three times a day, diluted 1: 1 with water). As a result, the yeasts adhere less strongly to the intestinal wall. Other examination options include swabs, for example from the mouth or vagina. Determination of antibodies in the blood can be helpful in detecting chronic fungal infections. In the case of an acute, rather mild Candida infection, increased antibodies of the IgA and IgM types as well as a normal IgG level are found. The detection of increased IgG antibodies indicates a chronic inflammation. The permanent detection of all three antibody types suggests a serious finding.

Any therapeutic concepts, however, are not primarily based on laboratory values. The patient's condition and medical history are always decisive. The worse the condition, the more complex the therapy should be. The better the patient feels, the more cautious the therapy is. In addition to the targeted combating of germs, the intestinal environment and the immune system can be decisively improved through nutritional measures. An antifungal diet, like treatment with antifungal agents, should not be done on your own. In any case, an experienced therapist such as a nutritionist, doctor and / or alternative practitioner should be consulted.

The focus of nutritional therapy is the extensive restriction of mono-, di- and oligosaccharides. In concrete terms, this means: In addition to table sugar (sucrose), you should also avoid glucose, fructose, malt sugar, glucose syrup, maltodextrin and invert sugar, such as those found in honey. It has to be accepted that this usually does not succeed 100 percent in reality.
It is particularly important to pay attention to the list of ingredients with ready-made foods. The addition “sugar-free” simply means that no sucrose has been added. However, it may contain other types of sugar. If there is no lactose intolerance, lactose seems to have a rather beneficial effect on Candida infection. Candida yeast cannot metabolize lactose. However, lactose is an important nutritional component for a healthy intestinal flora.
In terms of diet, alcohol can also be assigned to the group of carbohydrates. It should therefore be avoided in the case of fungal infections, just like sugar. Drinks containing yeast, such as wheat beer, have a particularly unfavorable effect. Bread should be low in yeast, preferably made from natural sourdough or with baking ferment.

Proteins and fats are unproblematic with fungal infections. However, they should not exceed the amount recommended as part of a healthy diet. Foods rich in fiber support the development of a healthy intestinal flora. They ensure better pre-stretching of the intestinal wall so that the antimycotics used can better reach the surface of the intestinal mucosa and thus work more effectively. Foods containing lactic acid, such as yoghurt, soured milk and kefir or lactic acid pickled vegetables, also have a beneficial effect. They support the enzyme functions of the digestive tract by creating a favorable pH environment and activate the intestinal-associated immune system. In addition, large quantities of cress, onions and garlic have been shown to have an anti-fungal effect. A nutritional history should also look for possible deficits in terms of vitamins, minerals and trace elements. Indications should be confirmed by appropriate laboratory tests. The diet should be followed for at least four to six weeks.

Even if the medical “mainstream” advises against anti-fungal diets with the argument that they are hardly sustainable and could lead to deficiency symptoms, practice shows that, at least for a few weeks, most patients can very well make a corresponding diet modification, and that is often the decisive factor when anti-fungal therapy is carried out in parallel. It is not clear which health disadvantage should arise from the restriction of isolated carbohydrates. On the contrary: As a welcome side effect, the antifungal diet often shows a noticeable weight reduction.

Yeasts of the Candida albicans type can be replaced by healthy yeasts of the Saccharomyces boulardii type. Myrrh also inhibits fungal growth. Corresponding preparations are suitable for milder fungal infestation or if there is a simultaneous tendency to thin stools or even diarrhea. In the case of a significant feeling of illness, for example with pronounced fatigue and frequent infections - especially if the sinuses are involved - one should rather treat with the active ingredient nystatin, a direct antifungal agent. Contrary to popular belief, it is not a question of dangerous “chemistry”, but rather a biological substance that was first obtained in 1950 from a soil bacterium. It reliably kills yeasts and only has a local effect. Occasionally skin reactions occur when taking nystatin, presumably due to the release of fungal toxins; Doctors speak of the Herxheimer reaction.

In addition to frequent changing and boiling of towels, the correct use of toothbrushes is important to prevent re-infection with yeasts. Conventional oral disinfectants are just as inadequate as dipping the toothbrush in nystatin suspension or 90 percent alcohol. With the latter, the toothbrush dissolves at the same time. Commercially available disinfectants for braces, oral irrigators or prostheses are preferable here. In addition: Use several toothbrushes at the same time and let the used toothbrushes dry out consistently. Drought is yeast's greatest enemy. In general, toothbrushes should be changed after every infection and otherwise every three weeks to prevent new infections.

After the therapy, work should be done on the intestinal environment in order to prevent repopulation with yeasts. The goal is a healthy mix of intestinal bacteria. These can be supplied individually to build up the intestine. Mostly, preparations with coli bacteria, lactic acid bacteria and bifido germs are used. Lactic acid fermented foods such as sauerkraut, bread drinks, yoghurt or sour milk also provide healthy bacteria.

The detection of yeasts is usually not a reason for panic reactions. There is also no point in focusing too much on the clinical picture through constant and repeated laboratory controls. One would almost like to recommend a certain serenity in dealing with the diagnosis, despite existing complaints. A yeast infestation can, but does not have to be, responsible for numerous complaints. Proof of this in a person who feels perfectly fit does not require therapy. However, if laboratory findings and clinical well-being match, countermeasures are indicated.

The article is largely based on the post:
MATEJKA, R .: intestinal fungi - the diagnosis is not yet a disease. The natural doctor - your health guide 6, pp. 8-10, 2006