What is the biggest big ship canal 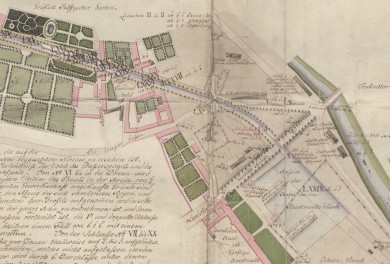 The Wiener Neustädter Canal in the 3rd district, 1816 by Anton Behsel. On the right the canal harbor in the area of ​​today's Wien Mitte train station

The initiative to build the Wiener Neustädter Canal came from the Wiener Neustädter Steinkohlengesellschaft, which wanted to ship its coal mined in Ödenburg by water to Vienna for cost reasons. A plan submitted to Emperor Franz II was approved by Emperor Franz II in 1794. The construction of the canal was then started after suggestions from A. Graf Apponyi, the wholesaler Bernhard von Tschoffen and the court agent Reiter by the Genie Officer Colonel Ing.Sebastian von Maillard commissioned by the coal company (who relied on English models) and from 1799 to 1803 under the management of the building director appointed from Ljubljana to Vienna, Joseph Maria Schemerl von Leythenbach.

Emperor Franz II contributed a large amount of his private fortune to the construction costs and took over the canal on his own account in 1797 after compensating the aforementioned entrepreneurs. In 1802 the canal was taken over by the state and administered by the newly created Canal Fund under the supervision of the Court Chamber.

The canal was fed by the Leitha and the Kehrbach. With an average discharge of 1 to 1.4 m³ / s, it was the third largest flowing water in Vienna after the Danube and the Vienna River. The supply of the required amount of water posed a major challenge in the planning and construction phase, as the water from the affected rivers in south-eastern Lower Austria had already been used intensively for agriculture, commercial operations and the drive of mills. The water-permeable subsoil also caused difficulties when building a watertight canal bed. In order to avoid further inclines, the route led east past the Wienerberg via Simmering, St. Marx and the suburb of Landstrasse into the Wiental. The height difference of around 100 meters on the entire route from Wiener Neustadt to Vienna was overcome with the help of 50 locks. In between there were 46 reaches over 57 kilometers, these are canal basins with an almost horizontal bottom. With 16 aqueducts and numerous bridges, streams and streets were crossed over and under. From 1811 a 3.8 kilometer long branch was added from Wiener Neustadt in the direction of Pötsching, which ended at the then Hungarian border. However, the planned expansion to Trieste did not materialize. In Vienna, the canal on the glacis in front of the Invalidenhaus (3) flows into a 210 by 114 meter harbor basin. This drained into the Vienna River. 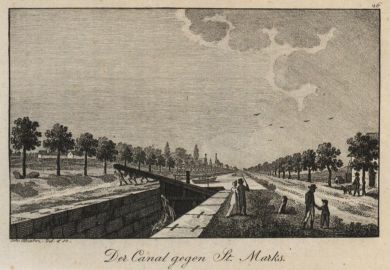 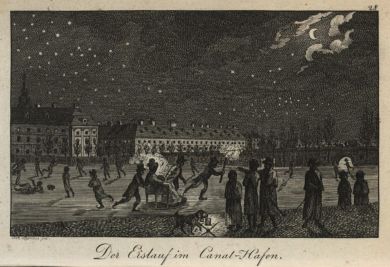 The canal quickly learned about unplanned use. Night ice skating on the harbor basin of the Wiener Neustädter Canal (Gaheis, 1801).

Up to 70 horse-drawn barges operated on the canal. This type of transport is much more efficient than road transport: while a horse can move a load of around one ton on the road, it is 30 to 50 tons on a waterway.[1] Around 22 tons of cargo could be transported on each of the 22.8 meter long and two meter wide canal boats. The boats were built symmetrically and could be pulled in both directions without turning. The crew consisted of three men, a helmsman, a horse handler and a person on the forecastle who cleared obstacles out of the way. The journey time was between two and a half and one and a half days. The boats operated during the “regular shipping period” from the beginning of April to the end of October. In winter the canal was cleaned and the canal structures repaired and occasional transports were carried out. In addition to hard coal, mainly firewood, bricks and other building materials were shipped. Salt and food are also found in the records.

In 1807, Count Johann Ernst Hoyos-Sprinzenstein received permission from the canal construction court commission to transport wood from the Rax area, which had been brought to Wiener Neustadt by the Huebmerschen Schwemm-Compagnie, on the canal to Vienna with its own ships and staff. Up to 1854, 30 of the Count's ships were on the canal, delivering around 50,000 cubic meters of wood to Vienna every year. Between 1803 and 1838 a passenger ship also ran daily between the Rennweg lock and Laxenburg.

From 1822 the state Canal Fund leased the canal to private investors, from 1847 to the owners of large brickworks in the south of Vienna:

In addition to transport, the canal served as a driving force for water wheels and for supplying process water. Terrain steps of around 2 meters each were negotiated at the locks. When the locks were not being operated, the water rushed down these artificial steps and could be used to drive water wheels. As early as 1803, the Canalfonds had locks adapted for energetic use. Gradually, the gradients were auctioned off to interested traders. There were seven locks in today's Viennese urban area, three of which were double locks. The drainage of the canal basin into the Wien River, which is about two meters lower, was also used for energy. 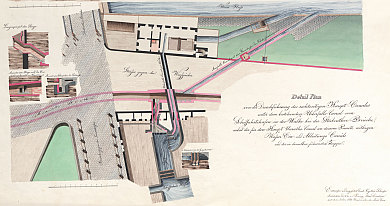 The outflow of the harbor basin into the Wien River with the fulling mill (Stubentormühle) operated at this point on a depiction by Cajetan Schiefer, 1831-1832.

Many different personalities, companies, state bodies and municipal institutions were among the water drawers from the Wiener Neustädter Canal: The orchard in the former Harrach garden and the properties and gardens of Countess Colloredo and Prince Metternich as well as numerous small private individuals were supplied with canal water poured, the municipality of Landstrasse used the water for street cleaning and flushing of the right Wiental collecting canal, the kk Veterinary Institute, the k.k. Military equitation, the k.k. The Rudolfstiftung hospital, the Roth metal factory, the St. Marx supply house and brewery, the Vienna Ice Skating Club, the wholesale market hall and the Aspang train station all draw service water from the canal.

In addition to these two formalized, strictly contractually regulated uses and usually associated with the payment of lease fees, ice extraction should also be mentioned. In addition, the canal was used free of charge and sometimes undesirably for ice skating (especially on the frozen canal port) and bathing, for drawing fire-fighting water, as a cattle trough and horse pond. 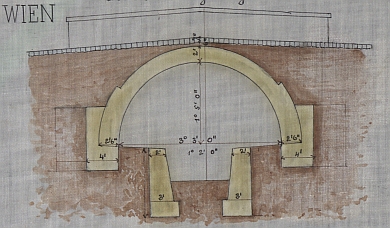 In 1845, Emperor Ferdinand I approved the construction of the "connecting line", which was supposed to connect the two terminal stations of the Northern Railway and the Gloggnitz or Southern Railway and to connect the main customs office north of the Canal Harbor to the railway. The canal route between Rennweg and the main customs office was ideal for the route of the railway. In 1848 the General Directorate of the State Railroad, as the operator of the connecting line to the Hofkammer, which administered the canal, proposed that the canal be replaced in this area. Construction work began that same year. The shortening of the shipping canal by around 1700 meters made it necessary to relocate the harbor basin near the Rennweg Bridge. The water flowing out of the new harbor basin was conducted in an underground channel along the Upper, Right and Left Bahngasse to the Wien River, and so the water wheels at the former sluice continued to be loaded and the water users supplied. The new harbor basin and the drainage canal were completed in 1849, but the connecting railway was not fully operational until 1859. The Vienna Ice Skating Club, founded in 1867, used part of the property created by filling in the canal harbor to build a natural ice rink, until the main customs office of the Stadtbahn was built at this point from 1895. Despite the shortening, the Wiener Neustädter Canal provided the highest transport performance in the following decade under its now fifth tenant, the "brick baron" Heinrich Drasche. 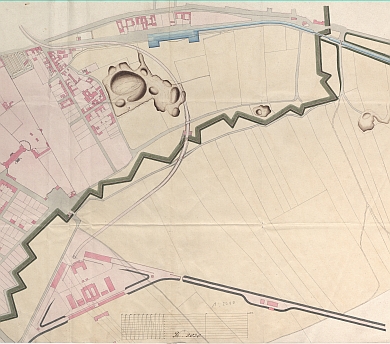 The second harbor basin and the connecting railway around 1850.

In 1871 the Hofkammer sold the Wiener Neustädter Canal to the "First Austrian Shipping Canal Actien-Gesellschaft" in order to rehabilitate the troubled state finances. In the meantime, the railways had become a far more efficient means of transport. At the beginning of the 1870s, freight income collapsed, while the leases for energy use and water supply continued to generate income. The canal company saw a way out to enter into an alliance with the Belgian railway company "Société Belge de chemins de fer" (SNCB). In 1878 they jointly founded the k. k. priv. Railway Vienna-Aspang as a stock corporation. The canal route was used again for a new railway line. The Aspang station was built on the site of the second canal port. The underground drainage channel was extended by a further 380 meters, the width of the remaining above-ground channel to Kledering narrowed in favor of the railway system. From 1879 the canal was no longer navigable and served exclusively as a works canal. The Aspang Railway went into operation in 1881.

Abolition of the Vienna section

With the beginning of the 20th century and the establishment of new supply networks for energy and water, the number of water users from the Wiener Neustädter Canal in Vienna declined increasingly. From 1895 the City of Vienna negotiated the complete replacement of the existing water rights in the city area and the termination of water supplies. However, the legal situation turned out to be extremely confusing and the remaining users did not want to give up the rights they had acquired. The project was delayed again and again. The "Austro-Belgians" found it difficult to maintain the drainage and works sewer in times of currency devaluation and the First World War, as these became increasingly damaged. In 1928, a rehabilitation project supported by the Lower Austrian provincial government provided for the drainage of the sewer stretch from Biedermannsdorf. In 1930 the canal water was finally drained into the Krottenbach (near Mödling) and the canal bed was drained after 127 years. The definitive notice of eviction was only issued afterwards, in April 1933. 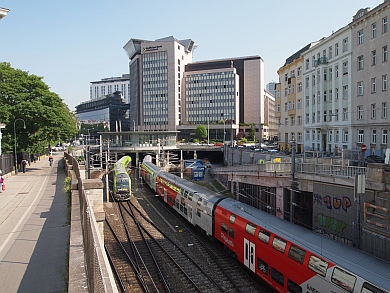 The high-speed railway line near Wien Mitte is still in operation today, roughly at the level of the former canal bed.

The Wien Mitte train station is now at the site of the first port basin. On the route of the connecting railway, the rapid transit railway now runs between Wien Mitte and the main train station. The Wiener Neustädter Canal begins in Wiener Neustadt with the confluence of the Kahrbach at the Ungarfeld power plant and has ended since 1973 with the confluence with the Mödlingbach near Laxenburg. The former canal route between Laxenburg and the Vienna city limits can still be seen - at least in sections - in the landscape. The remaining stretch is owned by the State of Lower Austria and is protected as an industrial monument.

Around 1800 a special find was made during excavation work for the canal: the Egyptian stool statue of the high official and priest Chai-hapi. The ancient statue dates from the second half of the 19th dynasty (approx. 1250-1200 BC) and is therefore older than the Roman settlement in the city itself Roman civil town of Vindobonas in what is now the third district.