What is the history of Swedish pancakes

I've always enjoyed reading. And anyone who, like me, likes to cook and read equally well knows that: You read about food in a novel and inevitably wonder what it tastes like. Or you suddenly get an irrepressible desire for the food described. Sitting in front of the fireplace with Hagrid's rock biscuits in his hut, scratching Fang behind the ear and listening to the latest Hogwarts stories, spending pocket money on candy in the honey pot or drinking a Butterbeer in Hogsmead when it snowed? Of course, that's what we all dream of. But even in lesser-known literary worlds, there is food on every corner. I already have one or two literary cookbooks and yet I was super curious as Kate Youngs Little Library Cookbookappeared. And I was all the happier when I received a review copy from the publisher.

So I want to take you to explore this book!

{I received this book as a free review copy. No further payment has been made. My opinion is not influenced.}

Kate Young blogs at The Little Library Café and loves books at least as much as I do. She actually comes from Australia, but now lives in England and published her cookbook in 2017. The German edition then appeared last year. The second cookbook is due to appear this year. By the way, she can also be found on Instagram, where she gives all-round sympathetic insights into her life. 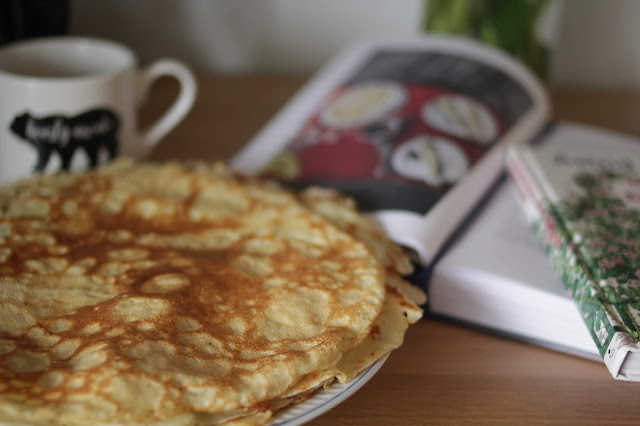 I start with Swedish pancakes like at Pippi Longstocking. In addition two confessions directly:

1.) I never liked Pippi Longstocking. It's like many typical children's books that somehow I just couldn't do anything with as a child. Ronja the robber's daughter? The sams? Momo? Nothing for me. Somehow they were too ... rebellious for me as a child. I couldn't identify with them and I couldn't get into the adventures they had. Everywhere I read: “Be Pippi, not Annika!” And keep thinking to myself that I actually liked Annika much better.

2.) I've never read such a long recipe for pancakes. For me, pancakes have always been a recipe that you just make somehow. Eggs, milk, flour, what can go wrong? As I said, the recipe is super long, but actually doesn't have any special tricks or gimmicks. The dough is very runny (there are 600 ml of milk for every 2 eggs!) And the pancakes should be particularly thin. 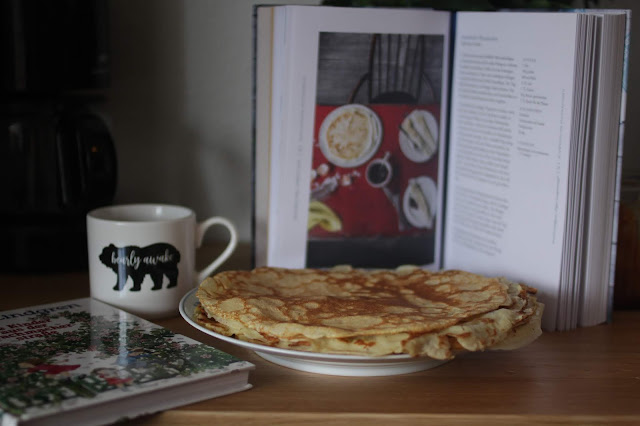 Ingredients for - according to the recipe - 16 pancakes:

Classic for pancakes, I would say. As mentioned above: I thought a lot of milk.

Beat the eggs with a few tablespoons of the flour, then gradually add the remaining flour and milk. The consistency should be like the liquid cream. Mix in the salt and sugar and stir in the melted butter.

Heat a pan over low heat, melt the butter in it. Pour some batter ("about 2 tablespoons of batter"; I recommend more) into the pan, swirl it and use it to distribute the batter evenly, bake until brown, turn and finish baking. Keep warm on a plate in the oven while the other pancakes are baked. "Since the dough contains butter, it is not necessary to grease the pan again after each pancake [...]".

Then serve, with jam, honey, cinnamon and sugar or any other delicious topping.

I have summarized the preparation here strongly; it actually covers a whole page. I quoted the two problem areas directly above. 2 tablespoons of dough seemed far too little to me. If I put 2 tablespoons of batter into my normal-sized pan and toss it around, it will make a mini-mini-mini pancake, no matter how hard I try to spread the batter very thinly. 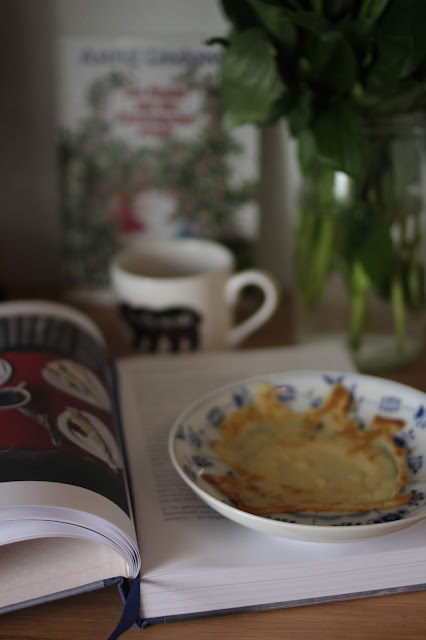 So I just added dough to the pan according to feel and came up with around 10 normal size pancakes.

After I baked the second pancake without adding any more fat and first stuck it on and then also got quite dark, I decided to slightly re-grease the pan every time and found the result much more convincing. 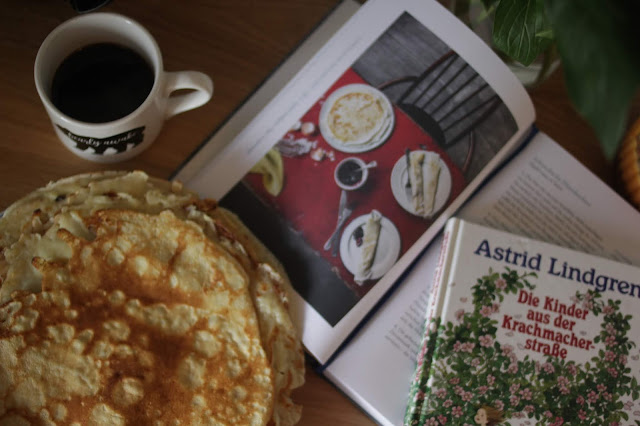 Pancakes! For breakfast! Delicious! Would I make the next pancakes using this recipe again? Nope, probably not. Certainly helpful for beginners. 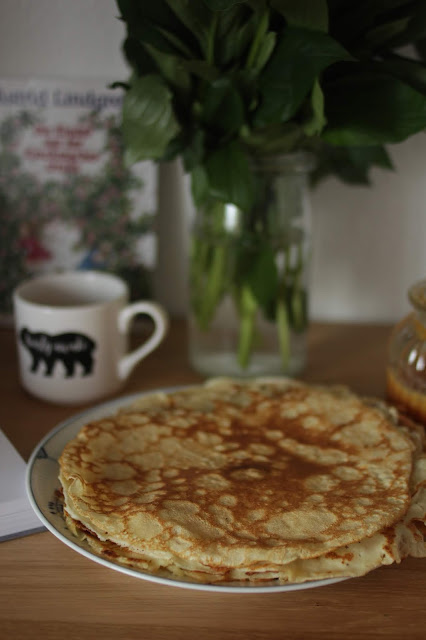