What's your best vengeance in the parking lot

The other day I was driving my car in the Eimsbüttel district. Anyone from Hamburg knows what that means:

Finding a parking space is like winning the lottery at certain times of the day. It's much better by bus and train, of course, but since I was out with my rolling dog house that day anyway, I was optimistic about looking for a parking space.

After two laps around the block, I actually found a great parking space, which was even available free of charge. I parked my Volvo happily and went off to do my errands: gnawing a second breakfast, exchanging a knocked-on hat, rummaging in the bookstore, buying colorful anemones.

So in a good mood I strolled through my old home. When I got back to my car after about two hours, however, I suddenly became ill-tempered.

“Typical mini driver!” I grumbled to myself.

Immediately I had prejudices: Mini-driver, in her mid-twenties, goes to have a latte macchiato and shop for clothes in Osterstrasse, buys the umpteenth pair of shoes and a pack of loungers Flying Tiger. 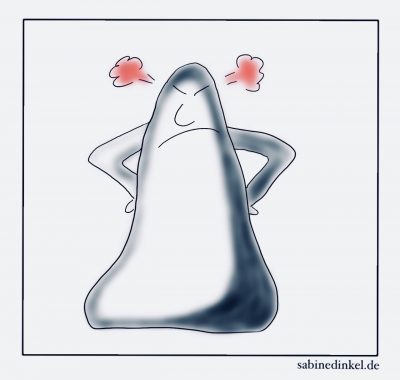 Getting out of this stupid gap cost me 20 minutes of precious life, some nerves and the help of a shop owner, in front of whose back entrance the said vehicle was parked.

Finally free - I was already about to drive off - it somehow annoyed me that the mini-driver should get away with it. So I flirted with sticking a "friendly" note behind the windshield wiper for her.

I looked for a note in my glove compartment.

However, since I couldn't find a single note in the car, I had to come up with something else.

I courageously picked up one of my advertising postcards for my new book “My ass bomb in the shallows of life”. There was enough space on the back for a complaint.

However, since I would have felt rather silly to add a grumpy comment to an actually cheerful advertising postcard, I simply wrote the following:

Good day,
You parked me pretty nicely with your Mini.
Getting out of my parking space took a lot of time and effort.
Grumpy greetings
Sabine Dinkel

I tucked the postcard behind the scraper so that my two bassetines could be seen. I drove away satisfied.

Wilma and Frieda adorn the front of my advertising postcard.

I'm sitting in the waiting room with my oncologist. “Hello, my name is so and so, you don't know me, but the other day you tucked a nice postcard behind the windshield wiper for me. I parked you and I would like to apologize. "

The voice is male. But I'm perplexed.

In short: The result is a very nice phone call with the alleged "parking failure", who is happy that I didn't scold him, but rather gave him a nice postcard to understand that the parking space he had chosen was unfavorable for me to park out.

To be able to call me, he researched my name on the internet, landed on my website, poked around and found out that I am an "ovarian".

And now hold on tight: his wife has an ovarian snipe too! For many years.

Isn't that a crazy coincidence?

During his call, the nurse asks me to bleed with a spritzer (= chemo), so I have to hang up spontaneously.

But this brief incident made me feel wonderfully amused and showed me that there is always something good for bad ... as long as I allow it and want to find it. It also shows me that I am not free from prejudices, but fortunately these are often refuted.

And that you can "punish" someone who parks you with an advertising postcard.

Personally, I think that's much nicer than jamming an anonymous and destructive “parking failure” or similar typically German instructions behind the windshield wiper.

Now I'm just waiting a bit to be parked again.