When asked about the personal Sleep duration (Need for sleep) one receives different answers from person to person. One reportedly needs at least ten hours of sleep, while the other seems to get by on four hours a night. Studies in the sleep laboratory show that people who, in their own opinion, need extremely little sleep, are very often mistaken.

On average, adult Germans sleep for seven hours and eight minutes; this corresponds to the length of sleep in neighboring countries. Sleep researchers assume that the duration of sleep has hardly changed in the last few centuries.

Comprehensive statistical studies have shown that, in the long term, both very short and very long sleep are associated with health disadvantages. The mortality of people who regularly sleep more than ten hours is just as significantly higher as that of those who sleep less than four hours. It has also been shown that women who sleep a lot are less prone to obesity than those who sleep little and restlessly. However, these examinations are not suitable for determining the optimal level of health for the individual. Because how much sleep we need depends on the quality of sleep and genetic factors. The recovery value of sleep is also mood-dependent: If we are mentally well, we need less sleep than in phases of a depressive mood.

The need for sleep is not only individually different, but also fluctuates between cultures. For example, babies of the Kipsigis, an ethnic group in Africa, sleep an average of two hours less per day than Americans, and these in turn sleep two hours less than Dutch babies.

Even during the different phases of life, the need for sleep differs considerably from person to person, although there can be great differences within the various age groups.

The Need for sleep in children and adolescents varies greatly from child to child. Some children sleep over 13 hours at the age of one month, others only 6 hours. Small children sleep an average of 10–12 hours, school children another 9–11 hours.

In adulthood, between 20 and 50 years of age, 90% of people have a constant need for sleep at around six to nine hours per day.

Statements about the Need for sleep in old age are not easy to meet. On the one hand, it is known that the duration of sleep in healthy elderly people can drop to five hours or less. At the same time, however, a prolonged time to fall asleep can be observed in the majority of the elderly, and the phases of being awake at night are also prolonged. It is also known that the duration of sleep increases again in the last years of life, especially when illnesses reduce the recreational value of sleep.

With increasing age, the phases of sleep also shift. The light sleep phases increase, while the deep sleep phases decrease sharply. In addition, the wake-up threshold for acoustic stimuli decreases. The older person wakes up e.g. B. in traffic noise or snoring of the partner much faster. Hormonally, there is an increased cortisol concentration in the evening and a reduced release of growth hormones at the beginning of the night. Melatonin levels also decrease with age 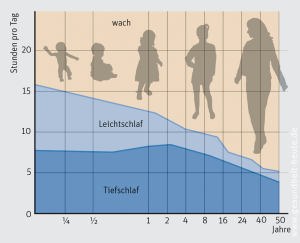 The daily sleep time and the ratio of the sleep phases changes in the course of life. The duration of deep sleep decreases more than the duration of light sleep.
www.salevent.de, Michael Amarotico, Munich