Is playing video games bad for the relationship?

Can (computer) gaming be harmful?

Deutsche Welle: Professor Müller-Lietzkow, you are currently at Gamescom. Now I've bothered you in the car racing simulator - how much would you like to talk to me about computer game addiction now?

Müller-Lietzkow: Always happy. Digital games are my passion, my field of research and something that I'm actually always burning for, from different perspectives - also politically.

All the better. The WHO has now officially recognized computer game addiction as a "gaming disorder" as an independent disease that requires treatment. What do you think is this the right step?

No! and yes! Globally speaking, in Asia we have an increasing number of people who find it difficult to break away from gambling. The situation can certainly be described as "critical". In Germany, on the other hand, the studies that are also normatively shaped fluctuate. In other words: Asia cannot actually be compared with Germany - and yet both are linked.

So from a global perspective, the move is absolutely correct. Because we have to think about it - when the gambling is so strong - how one can help. This is also important with regard to the health insurance companies in order to finance the necessary therapies.

And what do you have a problem with? 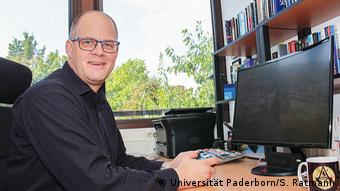 Müller-Lietzkow is professor for media economics and media management at the University of Paderborn. The console is only in his office, not at home.

With the question of evaluation. In other words: If someone plays like this and for so long, he is immediately dependent. I think if someone - let's say - plays eight hours a day, and he sometimes does that for six weeks in a row during the summer holidays - then he is not immediately dependent. If you present this as pathological across the board, you naturally come into a critical area.

Eight hours of gaming a day is therefore not yet an addiction criterion for you. But what then...?

Exactly, because I would never attach it to hours. After all, there are people who watch TV for hours or read books for hours. The consumption of a medium in itself is not yet an addiction criterion for me. And I wouldn't fix it in terms of time either, but rather in terms of effect.

For example, there are people who seek recognition in games that they don't get in the real world. If you need that over and over again because you often fail in the real world, then you should assume a certain addiction. If you neglect other things - and let's not just say friends or school - but also basic needs, then I would describe it as critical. These are the cases where you have to help and where you should go back to the normal.

The second thing is, when we talk about such relationships of dependency, then one has to see whether it is a dependency on a game world where one enters into parasocial interaction - drifting into this parallel world - or whether it is the successes in the course of the game that are the reward center in the Respond to the brain, whereupon dopamine is released.

I would also look at that very carefully. Because there are actually games that are demanding for a very long time and that can also make it difficult to quit. But that doesn't mean that you are dependent on it, but that you get a very interesting offer.

This is the second point that I find problematic about the WHO's step: a priori, games are more likely to make you sick than they are helpful.

You see it differently ...

Correct. If we talk about the future of the digital society and see how much has actually been derived from the game world over the years, then that is the wrong keynote. You shouldn't think about it in black and white, but you have to see that the shades of gray also play an important role.

Those who don't care about digital games often find it difficult to understand technology transfer or the opportunities in other industries. For example, it is about technologies, game mechanics, multimotivational logics [a term from psychology that describes that people are driven to their actions by various influences], which can be used, for example, in the context of digital education.

Speaking of digital education, what do you think about the media literacy of children, parents, students and teachers?

I would primarily speak of digital competence here. This is under-pronounced with parents in many areas, with teachers too. Digital literacy is not an integral part of their training, even if a lot of teachers have probably heard of it before,

And with children and young people, I no longer see digital literacy as a problem, but rather the question of alternatives. That means: They live in a digital world and then tell them to leave the digital. But if you've never shown them how to leave, then they're left. Literally.

Does that mean everyone has to learn something new?

In short: parents, yes, you would have to do a lot. Most of them have a smartphone, but they are not digitally competent. Teachers, yes, because they have a mediating role and can be trained much better in the field of digital skills, also in the form of further training.

And with children and young people, it is more about making the alternatives so attractive that they are also understood and accepted. Index finger logic is of no use; you have to generate understanding. Index finger logic only triggers the stimulus, as always with all things that were forbidden. It used to be like that with smoking, for example. This is not going to work. You have to achieve understanding on a cognitive level.

Are there rules at home?

My daughter is now 16. I believe that she can learn to use media in a very healthy manner.

In fact, I don't play at home. The reason for this is that I work a lot and therefore have two principles: I don't work at home and I don't gamble at home.

My console is in the office, which is a good thing because it is part of everyday work for me. But to be honest: The social contact with my family - especially with my wife and daughter - is worth significantly more to me than any computer or video game.

Prof. Dr. Jörg Müller-Lietzkow is professor for media economics and media management at the University of Paderborn.

The interview was conducted by Hannah Fuchs.